The Last Kingdom is in its fourth season on Netflix and the series follows protagonist Uhtred of Bebbanburg (played by Alexander Dreymon) as he joins the Saxons to unify England. The series sees Uhtred come across a number of difficult situations, and throughout the past four seasons he has been hounded by the Danish warlord Haesten (Jeppe Beck Laursen). Actor Laursen spoke exclusively to Express.co.uk about his most difficult scene to film.

What was Haesten actor Jeppe Beck Laursen’s most difficult scene?

Haesten is one of the main characters in The Last Kingdom and he is known for being the self-serving antagonist who puts his own best interests at heart.

He is a Danish fighter who was captured following a Saxon rebellion, but Uhtred took pity on him and let him walk free.

However he is known for being a sly character who is not afraid to deceive, and he has often tricked Uhtred into walking straight into trouble.

Season four included a tense moment when Haesten came across Uhtred and Lady Aelswith (Eliza Butterworth) on the road, and he started to taunt Uhtred.

He sent Lady Aelswith and her family back to Winchester, so they could be held captive by the Danish warlord, Sigtryggr (Eysteinn Sigurðarson).

Actor Laursen said it was one of the most difficult scenes to film, as Uhtred and his friends were actually tied upside down from a tree. 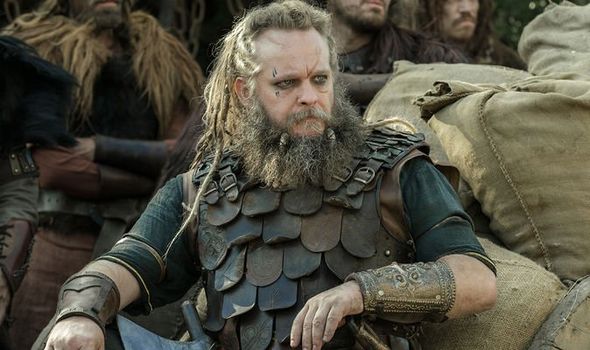 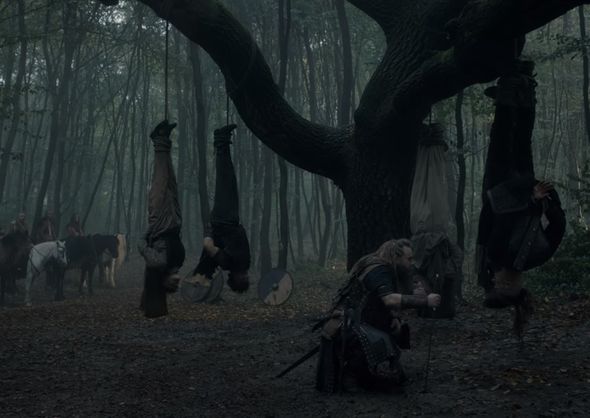 He said: “I remember when we were doing the hanging them in the tree sequence, I have a little monologue there and we were prepping for two days, and the boys learned how to hang upside down.

“They are all hanging there and they couldn’t be there for a long period of time, so I was so nervous I overstudied my text.

“I really wanted to nail it so that they didn’t have to hang upside down for more than a few minutes at a time. I remember the first take, there’s stuff in that scene that’s not in the show.

“And I’m standing there and it’s like, you know when you get inverted goosebumps? You get super nervous and I was like s*** I’ve got to do it again. 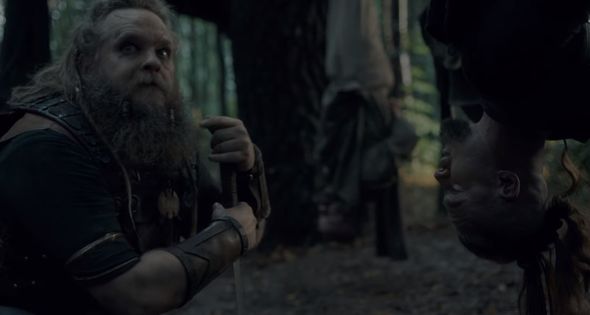 “They had to hang there for about five or six minutes the first time, which was pretty fun. It was nerve-wracking, they are my boys you know?

“I don’t want them to get hurt for real. It was kind of like a bond villain moment.” The scene involved Uhtred and his friends Osferth (Ewan Mitchell), Finan (Mark Rowley) and Sihtric (Arnas Fedaravičius).

The warriors were seen losing consciousness as they were tied upside down from a tree branch, and Haesten had left them alone with two of his men.

Thankfully their new ally Eadith (Stefanie Martini) came up with a plan to distract Haesten’s men so she could cut Uhtred and his friends down, and free them.

Finan actor Rowley agreed that the hardest scene was the hanging upside down scene, saying: “I know it was a short scene, but when you have to get upside down all the time, you start to get a headache.”

He said he did not want to be the first one to cave and ask to be cut down, because his head was hurting so badly. 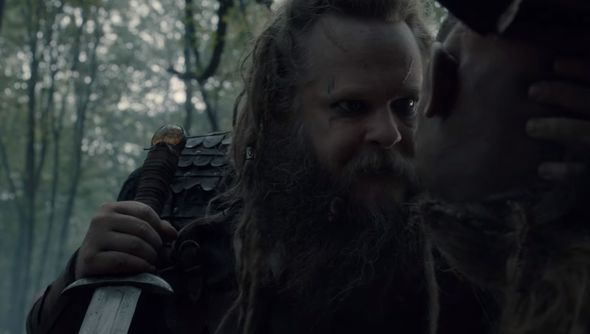 As Laursen explained, some of the scene was cut from the final edit, so Uhtred and his friends were left hanging for longer than fans were able to see.

This was understandably a very uncomfortable experience for everyone involved, but they were all in good hands and were kept safe throughout filming.

Fans saw a different side to Haesten in season four, as he started to take a step back from war, and was more interested in settling down.

He started to show weakness against Uhtred and ended up in Winchester attempting to save Eadith from harm.

Some fans even suggested he was going to pursue a relationship with her, as it was the first sign of empathy he has ever shown towards another character.

However, as he had no idea how to approach the situation, he ended up growing angry when she refused to stay with him and he left her alone, saving himself.

Laursen said he loved looking on forums such as Reddit to see what fans thought of his character, and what theories they could come up with.

Plenty of fans have said despite his bad qualities, he has become one of their favourites in the series. One fan said: “The way he’s in the higher circles, but kinda just roams around with nothing to his name.

“Sitting around, eating, spying… he even tells his allies “aight imma head out” when battles approach. This season really did it when Brida asks if he is spying on Uhtred and he just shrugs and tells her he spies on everyone. Classic Haesten [sic].”

Speaking about the hanging upside down scene, another fan said: “Yeah Haesten was fun this season. In 4×9, they made him look ridiculously dumb by doing what he did to Uhtred. Don’t know why they’d even add something in like that other than for comedy lol. [sic]”

While some viewers found that particular scene frustrating, others could not help but laugh when they saw Haesten make the rooky error.

The Last Kingdom is on Netflix now