Pam (Jenna Fischer) kept her style the same for most of the series. That included wearing two accessories, but one was mostly hidden in scenes of The Office. Find out what it was and which episode exposed the hidden prop.

Pam would wear a skirt to work. That also involved her wearing pantyhose, which caused a few problems. 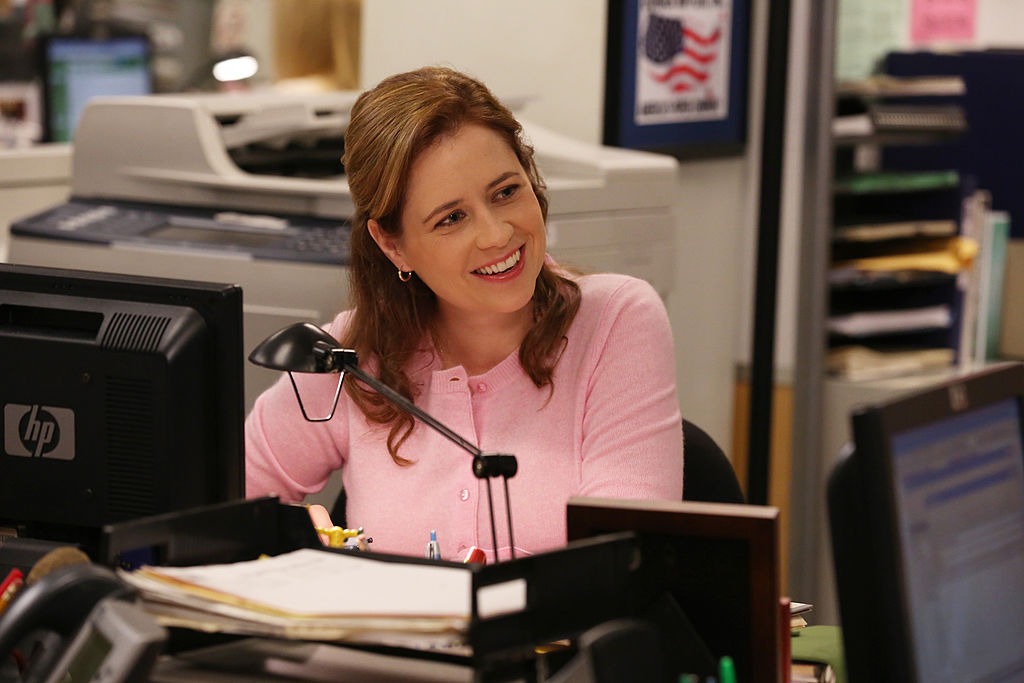 “Often times you know I was in that pencil skirt,” she said on the podcast, Office Ladies on the “Basketball” episode. “And if I was standing up we would sometimes have to put a leg wrap around my upper thigh to hide the microphone pack and then very delicately weave a microphone wire through underneath my bra, up my blouse.”

She continued, “The wardrobe people, they would put four or five packs of pantyhose in my trailer because they knew inevitably that I would get a run from this velcro, which was also itchy and uncomfortable.”

"A lot of people told me I was crazy to wait this long for a date with a girl who I worked with, but I think, even then I knew, I was waiting for my wife." Happy 10 year anniversary to one of TV's best couples. ❤️ #TheOffice

The star got lucky by walking away with Pam’s ring after the show wrapped up. “While true that I kept the engagement ring Jim gave to Pam, it was a silver prop ring, not worth $5,000, and I do not wear it in real life,” she tweeted.

There was a rumor that Fischer wore the ring in real life. She addressed this on Instagram when a fan brought it up. “What a terrible rumor! Of course not! I wear the ring that my actual husband of 10 years gave me!” she wrote.

Fischer confirmed that Pam was wearing an old bridesmaid dress in “Casino Night.” That’s because it’s the fanciest thing she owns given her salary as a receptionist.

She also is seen wearing a watch. “It was a discussion that Pam wears that watch every day, most of the time you can’t see it,” Fischer said on the Office Ladies podcast. “But every day Phil Shea would come up to me and he had a little tray and it had my watch and it had my Pam wedding ring on it. Or my Pam engagement ring on it. And you pick it up, put it on first thing in the morning, take it off at the end of the night.”

Fischer added that it’s normally not seen because it’s under the sleeve of her shirt. She said, at the time, it would make sense for the characters to wear watches. Pam still wears the same one for the fancy occasion because she doesn’t own a fancier one.

Stars of Tiger King: Where Are They Now?