Michael K. Williams was tragically found dead in his apartment on September 6, sending shockwaves of mourning across the entertainment world. Williams was best known for his roles on HBO’s “The Wire” and “Boardwalk Empire,” and also enjoyed roles in a slew of other movies and TV shows, including 12 Years a Slave,” “Lovecraft Country,” and “When They See Us” (via IMDb).

His representative confirmed the news to The Hollywood Reporter, saying in a statement, “It is with deep sorrow that the family announces the passing of Emmy nominated actor Michael Kenneth Williams. They ask for your privacy while grieving this unsurmountable loss.”

Social media was quickly flooded with tributes to the late actor. Among the famous faces sharing their memories of the late star were Mariah Carey, who tweeted a photo of them together alongside the caption, “A beautiful soul, a beautiful person, I’ll miss you always. Thank you for blessing us with your talent” with a heartbroken emoji.

Taraji P. Henson shared a slideshow of black and white snaps of the actor on Instagram, which she captioned, “Rest well my friend. JESUS!!! You will be missed deeply.” Kerry Washington wrote on Twitter, “So heartbroken. Thank you for the beauty and joy you brought to the world. Sending love and prayers to your friends, family and everyone who adored you me included. We adore you Sir.”

But one person who went the opposite way was 50 Cent – a man who’s no stranger to a controversial moment. 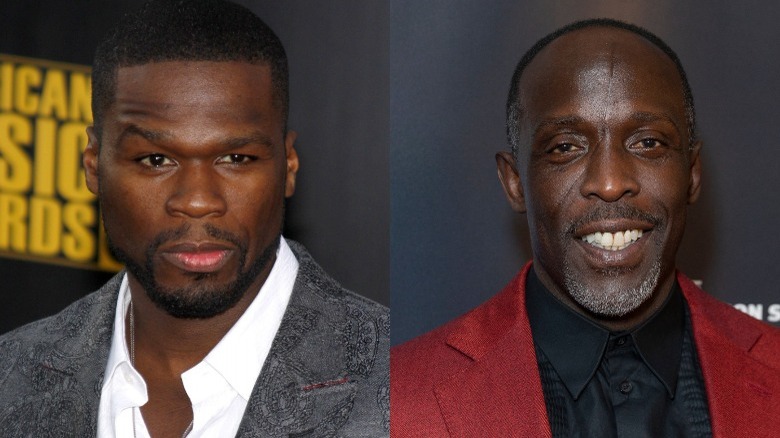 50 Cent, aka Curtis Jackson, was criticized after he used Michael K. Williams’ passing as an opportunity to bring up their feud (via Daily Mail).

He first shared a screenshot on Instagram of a New York Post article confirming Williams’ death, writing, “Damn if you didn’t see Raising Kanan check it out that fentanyl is no joke, killing the clientele.” He then spelt Williams’ name wrong alongside the hashtags “#bransoncognac,” “#lecheminduroi,” and “#bottlerover,” to promote his own alcohol brand, though Williams’ cause of death hasn’t officially been confirmed.

The rapper deleted it after intense backlash, but replaced it with a screenshot of an article discussing their “Instagram beef.” That post has also been removed.

As for how the two fell out? Well, this 50 Cent feud seemed to begin in 2018 after the rapper alleged music executive Jimmy Henchman had been assaulted in prison — though Williams denied that in a social media video (via Page Six). Williams didn’t name 50 Cent, but blasted his take as being “completely false,” to which 50 Cent trolled Williams by sharing and deleting screencaps on Instagram that showed him in a gay sex scene while acting in “The Wire.” He captioned it, “LOL Old Omar how much they pay you to play a punk PUNK. Mind your business da f**k wrong wit you.”

Feud or not though, there’s no doubting the timing of 50 Cent’s latest posts were completely out of line.

The DC Characters 'The Boys' Main Superheroes Share Powers With