Before Matt James’s season of The Bachelor turned to…mush, the biggest issue that viewers of the show had to deal with was Victoria “Queen” Larson’s bullying of the other contestants. Victoria’s bullying was so over the top that some viewers theorized she was actually a paid actor placed on the show (LOL), but turns out, Victoria was just trying to enjoy her time on television.

“I feel like a lot of the girls [on the show] were careful about what they said or [did],” Victoria said during her recent appearance on the Not Skinny But Not Fat podcast. “They wanted to present themselves well and like, yeah, I just wanted to have fun. It’s a show. I wasn’t taking it seriously.” Good to know! 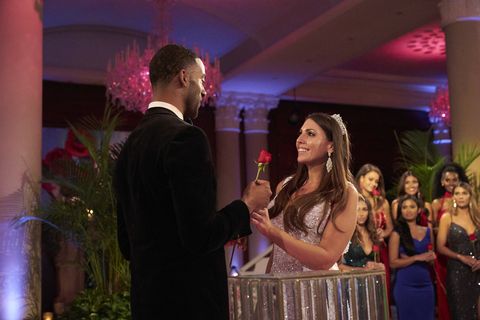 Victoria also said that she “absolutely” made a point “to be more outgoing” since she was on television, but when it became obvious that she and Matt didn’t have a true romantic connection, she kicked the dramatics up a couple of notches. “I think Matt is an amazing person. I definitely grew to appreciate him, but I didn’t personally have that romantic spark or that, like, physical chemistry. I didn’t feel it,” she continued. “So, I was just like, ‘Okay, let’s bring the queen. Like, let’s just have fun with it.'”

And despite getting into constant arguments with the women on the show, Victoria says that she had “really good relationships with everyone” in the house, and claimed that she was labelled as the show villain after some of her comments were considered to be “mean.” Victoria swears she’s “a nice person, but I don’t lead with that,” she added. “I don’t lead with looking for sympathy and using that.”

Not sure what the truth is here, but I’m low-key hoping Victoria goes on Bachelor in Paradise so we can see her ~true colors~!

You love all the deets on The Bachelor. So do we! Let’s overanalyze them together.

Who was voted off Survivor tonight? Rob and Sandra return