“Deliverance” and “Superman” actor Ned Beatty died on June 13 at the age of 83.  Deborah Miller, his manager, emailed CNN and told them, “Ned passed away from natural causes Sunday morning, surrounded by his family and loved ones.” The agency also confirmed that at one stage of his prolific acting career, Daily Variety called him the “busiest actor in Hollywood.”

Beatty had an early start in the performance industry, according to the agency. “He started as a professional performer at age ten when he earned pocket money singing in gospel quartets and a barber shop,” they claimed. Few people know that Beatty nearly chose a different career path for himself. According to Stuff, in a 1992 interview with The Associated Press, he revealed that, as a child, the church was “the theatre I attended as a kid.” He continued, “It was where people got down to their truest emotions and talked about things they didn’t talk about in everyday life.”

Beatty dished, “The preaching was very often theatrical.” It impacted him so much that he considered a life as a priest before he was cast in a high school play. He caught the acting bug and spent 10 years as a stage performer before being offered the role of Bobby Trippe in “Deliverance,” a man who was raped while being forced to squeal like a pig. But, with a surname like that, many wonder if Beatty was related to acting and directing great Warren Beatty. Keep reading to find out if they are family. 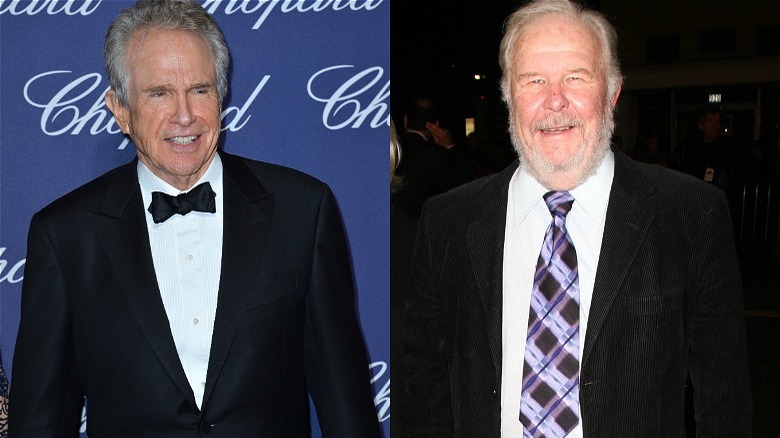 Warren and Ned Beatty were born only four months apart. Warren was born on March 30, 1937, while Ned would have celebrated his 84th birthday on July 6. But that’s about all they have in common. You see, Warren’s original last name is actually Beaty, not Beatty, so these two are not related. A 1987 Sun-Sentinel article paid homage to Warren and Shirley MacLaine’s father, Ira Beaty, who died that year. According to an AARP interview with the acclaimed actor from 2016, Warren changed the spelling of his name to prevent people from pronouncing it as “Beat-y.”

Although Warren and Ned are not related, it did not stop Ned from poking some fun at the stalwart. Per The Scottish Sun, Ned had a ready answer and would tease that he was Warren’s “illegitimate uncle.” Ned once talked about being recognized in public even though fans didn’t know his name. CBS News reports that in 1992 he said, “For people like me, there’s a lot of ‘I know you! I know you! What have I seen you in?'”

Ned also voiced the villainous Lots-O’-Huggin Bear in Toy Story 3, and made his presence known. As director Lee Unkrich tweeted, “Just heard that Ned Beatty passed away in his sleep.” He added, “It was a joy and and an incredible honor to work with him. Thanks, Ned, for bringing Lotso to life — both his good side and his not-so-good side. We’ll miss you.”

Who is representing Germany at Eurovision 2019? Meet Sisters who will be performing S!sters