David Arquette has been a popular name in Hollywood since the early ’90s. Best known for his role in the slasher film franchise “Scream,” Arquette is no stranger to the spotlight, or to headlines.  He even spent some of his time wrestling, too. According to Pro Wrestling Fandom, “Arquette took a brief foray into professional wrestling in early 2000, competing for World Championship Wrestling (WCW).” Now, over a decade later, Arquette is blending both his acting and wrestling skills for another project he is working on, a new documentary called “You Cannot Kill David Arquette,” per The Ringer.

While Arquette has undertaken a lot brutal beatings, and even a near-fatal heart attack, for this upcoming biopic, one person has been by his side through all of it; his second wife Christina McLarty, per Entertainment Tonight. The actor-turned-wrestler tied the knot to McLarty back in 2015, per People, which was two years after his split with prominent actor, Courteney Cox. Arquette and Cox were famously together for 14 years and even starred alongside one another in the “Scream” films.

So, who is Arquette’s second wife? If you want to know more about the actor’s current significant other, you’ve come to the right place. We did some digging to learn everything there is to know about McLarty and her relationship with Arquette. From where they met to what she did before being connected, here’s what we know! 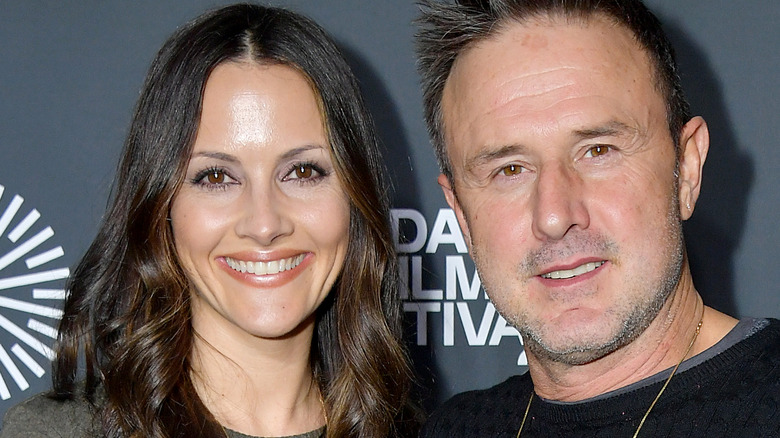 David Arquette’s second wife Christina McLarty has also had an interesting career. Born in Hope, Ark., McLarty’s resume consists of a variety of different roles in the entertainment realm. According to The Famous People, McLarty got her start as a ground journalist back in Arkansas. She then moved to Los Angeles, Calif. to work for CBS and eventually became a correspondent for Entertainment Tonight. Along with her time on ET, McLarty also dabbled in some light acting. She was cast in the CBS soap opera ‘The Young and the Restless’ before becoming serious with Arquette. The celeb couple met right after her sudden split from “Girls Gone Wild” founder Joe Francis at a Camp Playboy event at Comic-Con and apparently had an “instant connection,” via Amo Mama.

Shortly after meeting, Arquette appeared on The Howard Stern Show, per E! News, where he revealed that the pair were dating. He said, “She’s adorable,” Adding, “I’m not one to run around with different girls. I like someone that makes me feel good and that I can make feel good.”

According to People, their relationship only continued to blossom with them eventually making it official by tying the knot in 2015. Now the couple shares two children, Charlie West Arquette and Alexis Gus Arquette, and appear to be stronger than ever. McLarty has since moved on from acting, and per IMDb page, is now a producer.