In 1997, Matt Damon became romantically involved with Minnie Driver while the two filmed “Good Will Hunting,” the film in which they played love interests. However, they broke up very publicly — and that was all due to Damon’s romance with Winona Ryder.

At the time, Driver was upset with how public her breakup with Damon became, and how she was portrayed by the media. “I had to be the victim,” Driver said in 1998, via the Los Angeles Times. “It’s horrendous breaking up with someone anyway, but to have it be so public and to be cast in a role [in the tabloids] that I would never play if they were paying me,” she added. She also took issue with her “Good Will Hunting” co-star confirming their breakup during an interview with Oprah Winfrey. “Of course, he was busy declaring his love for me on David Letterman a month previously,” Driver added.

These relationships occurred just as Damon’s career was skyrocketing, and he learned valuable lessons about dating over that time period.

He completed changed his dating philosophy 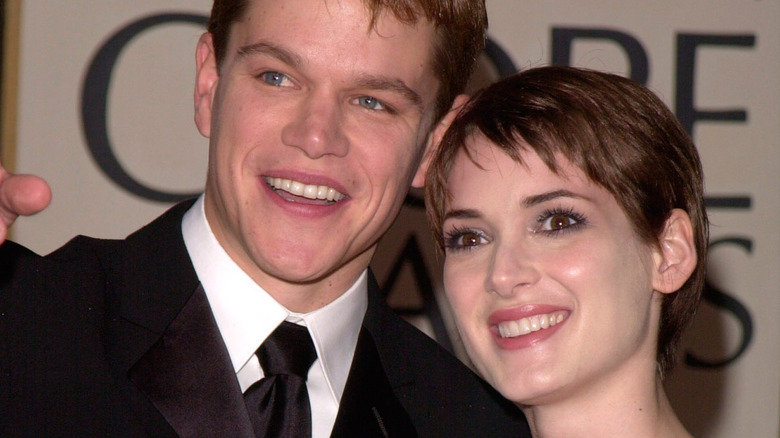 One of the more forgotten couples in Hollywood is the former pairing of Matt Damon and Winona Ryder, whose relationship began under semi-controversial circumstances. Despite dating Minnie Driver throughout the filming of “Good Will Hunting,” it was Ryder — who he allegedly met in 1997 — who accompanied Damon to Oscar parties in 1998, per the Los Angeles Times. But a few years later, in May 2000, Damon and Ryder called it quits.

At the time, tabloids romantically linked Damon to Penelope Cruz, but he denied those rumors, per Entertainment Weekly. In fact, seeing his relationships play out in the press ended up souring Damon on the idea of dating celebrities altogether. During a 2004 Playboy interview, Damon was candid about his intention of keeping his love life out of the headlines. “[I]f you’re the cover child or the cover couple, then you’re f***ed,” he explained. “And don’t date a celebrity. I don’t think I could fall in love with a celebrity right now, because it would mean changing my lifestyle, and I like that my lifestyle feels normal to me most of the time,” he added.

Damon echoed these sentiments in an interview with Australia’s Sunday magazine (via Today). “[Why would] anyone want to spend money to see you in a movie, after seeing you [all over the magazines?]” he wondered. “These days I definitely only date, as we say, ‘civilians.'” Keeping to his word, Damon wound up marrying a woman with a regular job.

Matt Damon's wife was a bartender 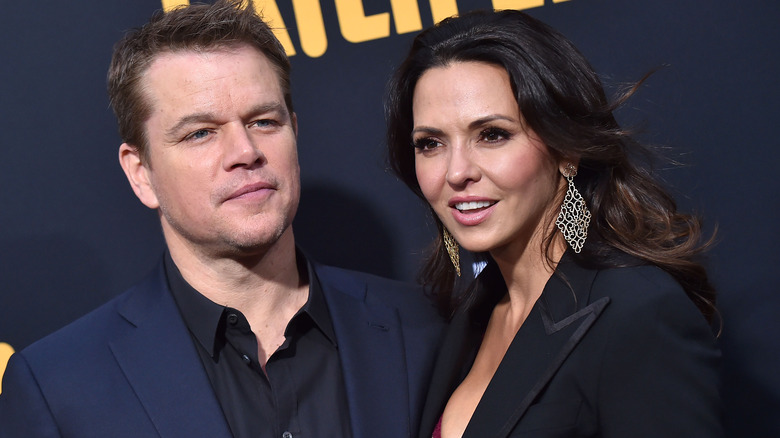 While Matt Damon was in Miami shooting “Stuck on You” in 2003, the cast and crew dragged him to a bar where he met his future wife Luciana Bozán Barroso, per BuzzFeed. “I was working as a bartender in South Beach (Miami) and he was shooting a movie there and the crew ended up in the bar one Saturday night,” she recalled to Vogue in 2018. At one point in the night, the “Bourne Identity” star came behind the bar and Barroso put him to work mixing cocktails. Luckily, he learned how to mix drinks when he played a bartender in an earlier role.

Damon enjoyed dating a woman who kept him out of the headlines, and in 2005 the couple were married in a small civil ceremony. They did not have a large reception, but in 2020 they renewed their vows with 50 guests on hand, per People. The couple have four daughters: Stella, Gia, Isabella, and Alexia, Barroso’s daughter whom Damon adopted, per Closer Weekly. Although Damon’s wife is not a celebrity, she is very close friends with Chris Hemsworth’s wife, Elsa Pataky, according to Vogue.

Maya Jama planning fashion empire as she trademarks her name for clothes, bags and perfume