The REAL migrant invasion: Officials stop 13 children and 20 adults as they land on Lanzarote beach as numbers attempting to reach Spain passes 400 in just days

Spanish authorities have stopped a group of 33 migrants, including 13 minors, as they attempted to enter the country.

The migrants arrived in the area of Jameos del Agua in the North-East of Lanzarote, the Canary Islands, today.

The Spanish Civil Guard released two pictures taken on the beach which show some of the 33 people and their boat in the moments after they arrived.

It is not know the ages of the other migrants or where they came from. 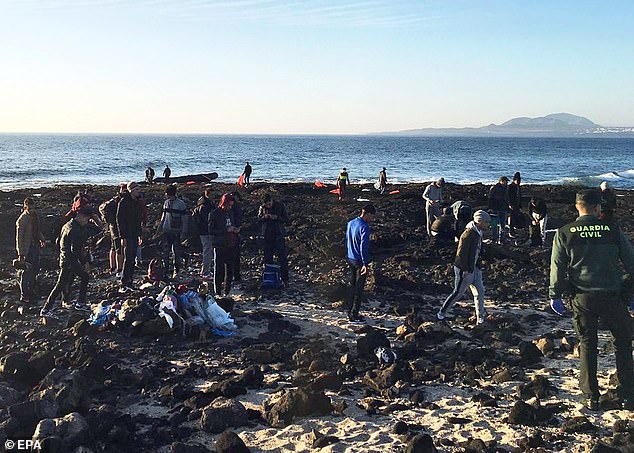 Some of the 33 migrants, which included 13 minors, stand on the beach in the area of Jameos del Agua, Lanzarote as the Spanish Civil Guard looks on 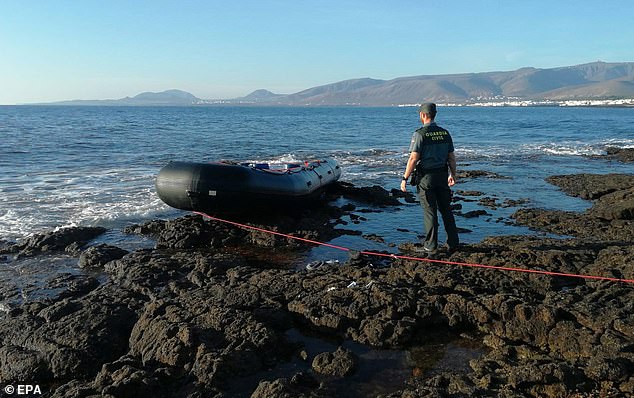 More than 400 migrants attempting to cross the Mediterranean Sea were rescued by the Spanish Coastguard in just the first two days of 2019, reports the Independent.

Around 290 people were picked up from five boats in the Alboran Sea and the Strait of Gibraltar on Wednesday January 2.

On New Year’s Day another 111 people were also pulled from boats by authorities.

Today’s crossing comes after the European Union’s border agency revealed the number of unauthorised border crossings into Europe has hit a five-year low.

However migrant entries into Spain via the Mediterranean continue to climb.

Frontex also said about 57,000 crossings were detected in Spain, double the figure for 2017 and the most of any country in the EU, making the route from Morocco to the Iberian Peninsula the most active in Europe.

They also said people crossed the EU’s external borders without authorisation around 150,000 times last year, a 25 per cent drop compared with 2017 and far below the peak of over a million in 2015. 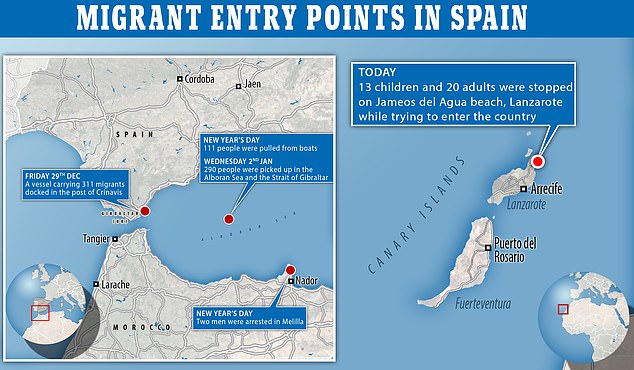 More than 300 migrants docked in Crinavis on December 29 and in the first few days of 2019 (left) more than 400 migrants were stopped by authorities trying to enter Spain. Today the group of 33 people were stopped in Lanzarote, shown on a map right 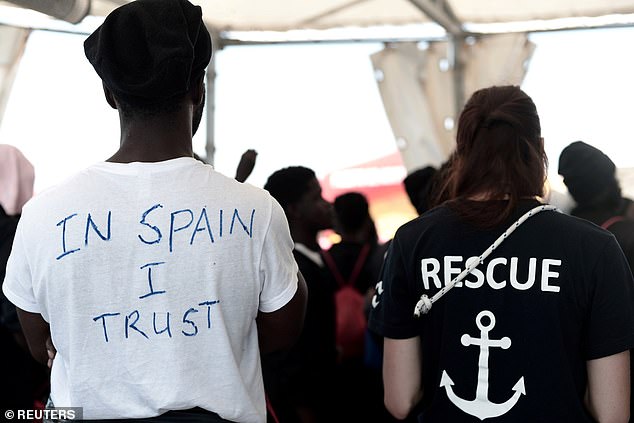 A migrant wearing a t-shirt reading ‘In Spain I Trust’ waits to disembark from the Aquarius rescue ship. Spain received the most unauthorised border crossings of all the EU member countries in 2018 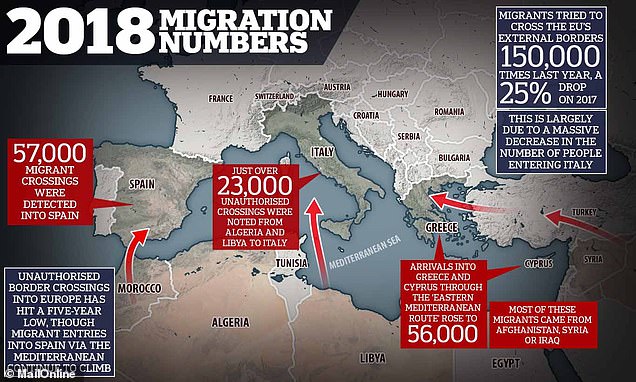 Data from the EU’s border agency Frontex shows the number of unauthorised crossings into Europe has hit a five-year low, although entries into Spain via the Mediterranean continue to climb

The border and coast guard agency said the drop is due to a massive decrease in the number of people entering Italy, mostly after setting out from Libya and Algeria.

Just over 23,000 unauthorised crossings were noted on that route this year, an 80% drop since last year and the fewest since 2012.

Arrivals in Greece and Cyprus through the so-called Eastern Mediterranean route rose to 56,000 last year, with most of the refugees coming from Afghanistan, Syria or Iraq.

On New Year’s Day video footage emerged of two desperate migrants getting out from inside mattresses during their bid to reach Europe from Africa.

The sub-Saharan men were arrested after border guards found them at a check-point between Melilla, a Spanish enclave on the north African coast, and Morocco.

Despite having been concealed in mattresses, the men appeared to be in good health and did not need medical help.

The sub-Saharan men were arrested after border guards found them at a check-point between Melilla, a Spanish enclave on the north African coast, and Morocco

The driver of the vehicle used to transport them is said to have fled into Morocco before he could be detained.

Spain has become the main entry point for migrants and asylum-seekers looking for a better life in Europe as other EU countries tighten up controls at their borders.

A smuggling route through Libya to Italy has also been complicated by conflict and violence there. 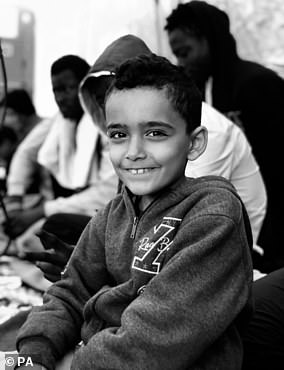 Children, pictured, are among the 32 migrants who have been stuck on a rescue boat in the Mediterranean for two weeks

The 32 survivors of a rescue mission in the Mediterranean Sea are in ‘a desperate situation’, a campaigner has said.

Volunteer Robin Jenkins, 45, from the Vale of Glamorgan, was on the Sea Watch 3 when it rescued the migrants off the coast of Malta on December 22.

He spoke as the group, which includes children, remains stranded on the boat at sea as no nation has granted it permission to dock with the migrants on board.

A petition calling for the UK Government to help find a port of safety for the vessel had topped 42,500 signatures by 5.30pm on Saturday.

Mr Jenkins said the group are owed the ‘same humanity’ as other people he has rescued.

He said the group were in an inflatable boat that was ‘not suitable for seafaring’ and had a smell of fuel coming from it.

He said: ‘There was one woman who we rescued with her seven-year-old son. She was a single mother who said that even one more day or one more hour in Libya was too much to bear.

‘These people were desperate. They would have to be to have got into that boat. 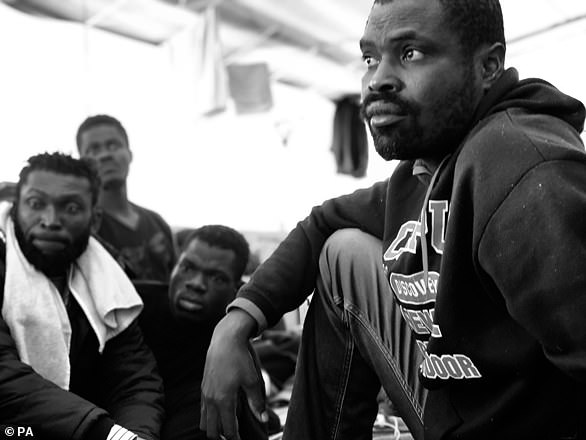 Volunteer Robin Jenkins, 45, from the Vale of Glamorgan, said the migrants’, some of the men pictured, boat was ‘deadly’ in the three-metre high waves

‘People back home don’t understand that the Mediterranean in December (and January) isn’t the same one in the summer holiday brochures. We’ve had waves of more than three metres.

‘This is deadly. Their boat was deadly. And now they’re stuck at sea – after two weeks – because European countries cannot afford them the humanity that they deserve.

‘They are just people. The same as the people I have pulled from rivers and off the coast in the UK and delivered back to shore. They are owed that same humanity.’

The petition, on Change.org, says the group are in ‘need of urgent help’ as European countries refuse to open ports and provide shelter.

Melilla, together with a second Spanish enclave, Ceuta, have the European Union’s only land borders with Africa.

The migrants cheered and applauded as the vessel docked in the port of Crinavis near the southern city of Algeciras, the largest city on the Bay of Gibraltar.

Proactiva Open Arms, the Spanish charity which runs the Open Arms vessel carrying the migrants, feted the arrival with a ‘Mission accomplished’ tweet.

The migrants come from 19 different countries, including Somalia, Syria and the Ivory Coast. More than a third of them, 139, are minors. 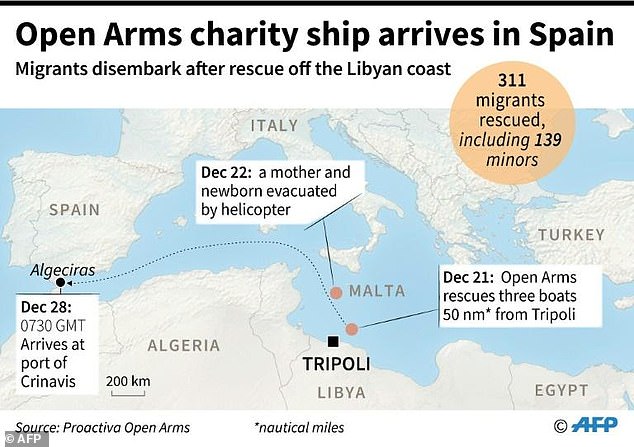 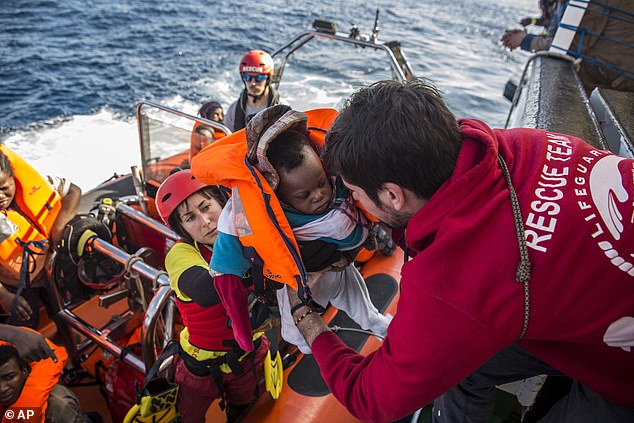 Frontex said people crossed the EU’s external borders without authorisation around 150,000 times last year, far below the peak of over a million in 2015

The migrants were rescued on December 21 from three vessels but were denied entry by Italy and Malta.

Libya, France and Tunisia did not respond to Proactiva Open Arms’ requests for permission to dock, Madrid said.

On Saturday December 22, a newborn baby and his mother were helicoptered from the boat to Malta, while a 14-year-old suffering from a serious skin infection was taken to the Italian island of Lampedusa.

Proactiva Open Arms operates in the sea between Libya and southern Europe, coming to the aid of migrants who get into difficulties during the crossing from northern Africa.

This was the first time since August that Spain has allowed a charity rescue ship to dock and unload migrants in the country. The UK is stepping up patrols in the Channel after a recent surge in the number of migrants attempting to navigate in small boats.

At least 139 migrants were caught crossing from France to Britain over Christmas, and 239 have reached the UK since November – with 539 attempting to cross the English Channel in small boats in 2018.

Sajid Javid called in the military earlier this week as he tried to get a grip on the Channel migrant crisis.

In a major escalation, a Royal Naval vessel was sent to patrol the Straits of Dover and the Royal Air Force will provide aerial surveillance.

The deployment is yet another U-turn for the Home Secretary, who refused an offer of military assistance from Defence Secretary Gavin Williamson at the weekend but then changed his mind and wrote to him requesting support.

Mr Javid could be forced to pay the Ministry of Defence up to £1million for using a Royal Navy ship to patrol Britain’s coastline.

The Home Secretary signed off a £20,000-a-day bill for the use of HMS Mersey to help find migrants crossing the Channel from France.

The 1,700-tonne vessel made its way into position in the Dover Straits yesterday, where it will remain until it is replaced with two Border Force cutters – HMC Seeker and HMC Protector.

But they were still in Mediterranean ports last night undergoing routine maintenance, four days after Mr Javid announced their return.