The orange trumpet vines are persisting through the Newcastle winter, so too are the relics on his mantelpiece that have travelled with him from Lhasa to country NSW. University students fill the other 42 rooms in the Redemptorist monastery turned dormitory.

It is quieter here than the Tibetan jail where he was tortured by Chinese guards, the French hospital where he was evacuated to with the help of a former French first lady, and the temples of Dharamshala where the Dalai Lama would resist his calls to turn to violence against Chinese occupation. 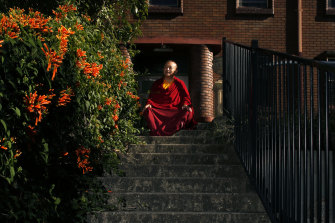 Venerable Bagdro, a Tibetan Monk who was imprisoned in China and is now a refugee in Newcastle, Australia. Credit:Darren Pateman

But Ven Bagdro remains anguished, fearing Tibet is being overlooked as the world’s attention focuses on the Chinese Communist Party’s human rights abuses in Xinjiang, the extinction of democracy in Hong Kong and growing calls for a Beijing Olympics boycott.

“People are suffering in Xinjiang and Hong Kong but also in Tibet,” the 45-year-old said. “It is deadly to the Tibetan spiritual language and its culture.”

Educated in a patriotic Chinese school, he knew little about his people until he joined a monastery as a teenager in 1985. After a pair of American tourists gave him a book on China’s crackdown in Tibet, Ven Bagdro grew more incensed. By 1988 – aged 16 – he was one of 85 Tibetan monks thrown in jail after what he says was a peaceful protest against Beijing’s rising influence.

“The guards used electric shocks, put my feet in ice for so long that the skin came off of my feet,” he said. “They put their cigarettes out on my face.” 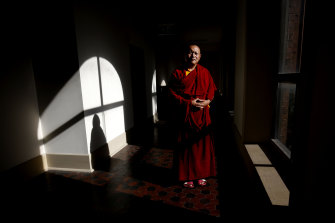 Venerable Bagdro at the Newcastle monastery on Monday. Credit:Darren Pateman

Choegyal Wangpo’s phone was handed over by the shop owner to the Chinese police between late August and early September 2019. On it, they would find messages between the monk and other Tibetans living in Nepal and a donation to a 2015 Nepal earthquake recovery fund for Tibetans. Human Rights Watch said in a report released on Wednesday that Choegyal Wangpo was beaten and interrogated for communicating with Tibetans outside China before his village was raided by Chinese police.

When the raid found more messages with Tibetans abroad and photographs of the Dalai Lama another 20 monks were detained. The village had previously been lauded for its cooperation with authorities. One Tengdro monk received the “law-abiding advanced monks and nuns” award in 2014. Suddenly, three of them were jailed for five, nine and 17 years. Choegyal Wangpo received 20 years in prison.

“This was not some rebel stronghold,” said Human Rights Watch China director Sophie Richardson. “It was just security gone mad. ”

Richardson said the tactics seen for decades in Tibet has been expanded to Xinjiang and Hong Kong. “It’s the same pre-emptive security pathology shot through all of these different communities,” she said. “I think it’s a powerful reason why there has to be a standing mandate at the UN to monitor and report on human rights conditions right across China.”

The crackdown has been fuelled by a push by Chinese President Xi Jinping since 2017 to accelerate security operations and development in Tibet’s border areas. Since then, officials have been competing to show maximise security operations in their areas and detect supposed infiltration by followers of the Dalai Lama.

Ven Bagdro said it was becoming more difficult by the day to get updates from home. One of his most recent videos is of a friend crying saying “we have no work or freedom”. “The security cameras are everywhere, but these cameras are not to protect, they are to watch,” he said.

Ven Bagdro left India in 1991 with help from France’s then-first lady Danielle Mitterrand to be treated in a French hospital for injuries acquired in prison. He would go on to lobby British MPs to call for tougher action on Beijing’s treatment of Tibet. He was granted refugee status in Australia in 2019.

Now, he fears Beijing’s 2022 Winter Olympics will gloss over the human rights abuses suffered by his people without multinational action.

Support for a diplomatic boycott is growing after Nancy Pelosi, the third highest-ranking figure in the US administration called for governments to not send any representatives to China for the February Games.

A poll by Essential Media for the Australia Tibet Council in June found 47 per cent of Australians supported a diplomatic boycott and only 22 per cent opposed the idea, roughly the same number as in Britain and Canada.

“Even sports-mad Australians think it is hard to justify competing in and sending officials to celebrate and attend an Olympic Games in China,” said Dr Zoe Bedford, the Council’s executive officer.

China’s Foreign Ministry has accused those calling for a boycott of trying to sabotage the Olympics and has rallied dozens of countries at the United Nations, including Belarus, to back the sovereignty of countries to deal with their own human rights issues.

“The affairs of Hong Kong, Xinjiang and Tibet are China’s internal affairs, and the outside world should not interfere,” said spokesman Zhao Lijian. “All should abide by the purposes and principles of the UN Charter, respect the right of people of all countries to independently choose the path of human rights development in light of their national conditions.”

314 victims 'abused by Roman Catholic clergy and laymen' in Germany