Africa’s golden hour: Stunning images of the African savannah at sunset show lions and giraffes silhouetted against the sky

A set of stunning images show lions and giraffes silhouetted against the sky during the ‘golden hour’ of the African savannah at sunset.

Photographer Clement Kiragu, 39, stalks his subjects in the hours before the sun sets and rises at Amboseli and Maasai Mara National Parks to ‘immortalise’ the creatures in the fleeting golden light.

The photos show heavenly rays of warm sunshine resting over the vast expanse of the African savanna, mixing with the dust and foliage to create a misty haze.

With a focus on ‘big cats’, Kiragu spends hours photographing lions and other animals in their most-active hours, when the sun is less ferocious.

In one spectacular image, a lioness and her cub can be seen meandering through the dusty plains in the dusky evening light. In another, the silhouette of a male lion is defined by the setting sun.

Lions aren’t the only species avoiding the searing daylight hours: Mountainous African elephants live in the grassland, with towering giraffes nearby too.

Vultures are shown waiting for scraps at the top of a knotted trees sticking out of the landscape. Even horses buck and play under the shade of a tree in the hazy light.

Africa receives more than 30 million tourists a year and the continent is the world’s number one destination for safaris. With the number of visitors increasing, Kiragu hopes that his images will highlight the importance of wildlife conservation. 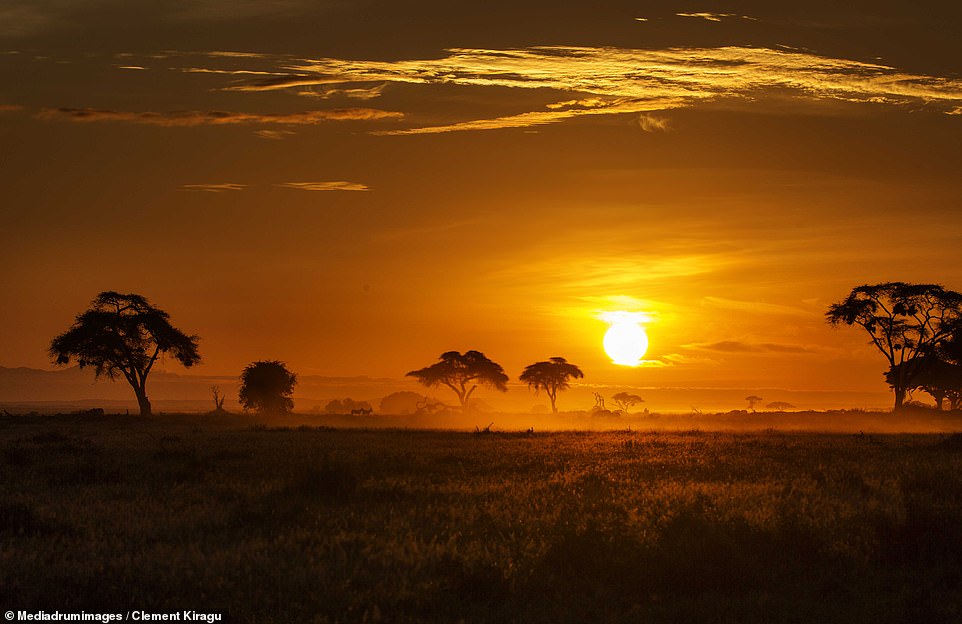 An image shows the blinding sun stretching out through the dusty savanna at sundown. The beautiful images were taken by a wildlife photographer who spends his time taking snaps during Africa’s ‘golden hour’, the time before sunset and after sunrise 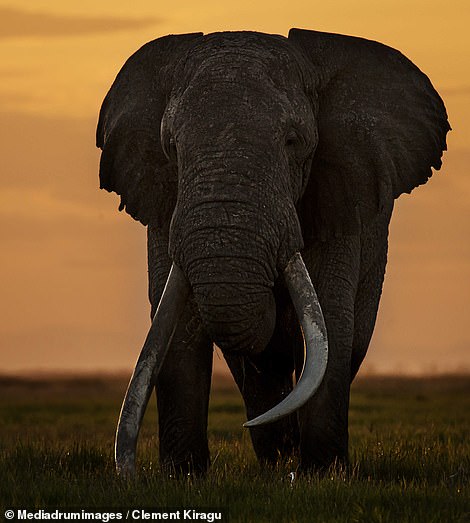 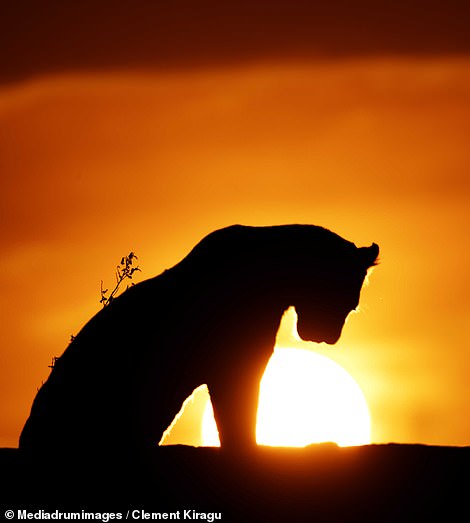 Pictured: An elephant photographed in the early morning sun as the sun outlines the silhouette of a lioness in Nairobi, Kenya 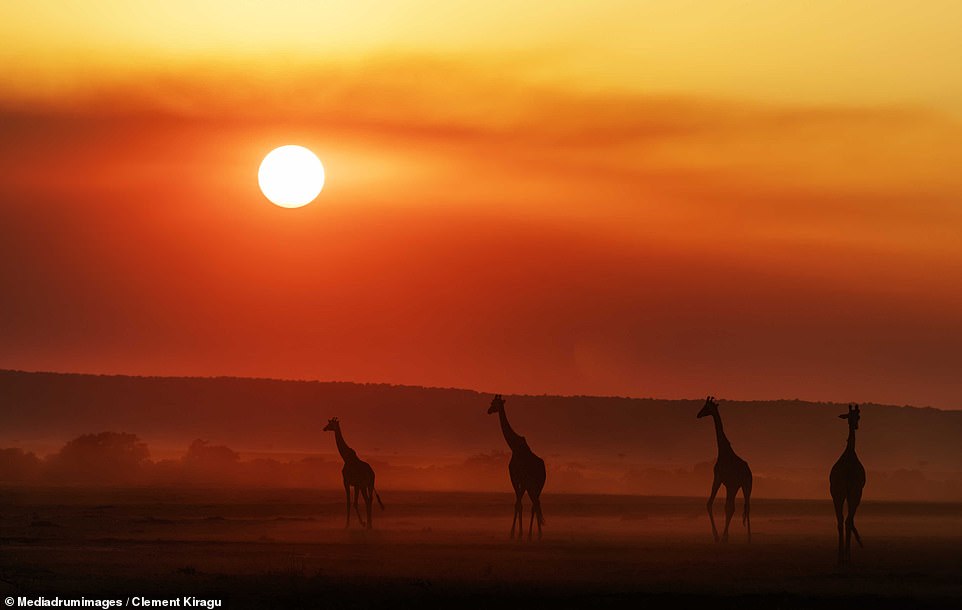 A tower of giraffes stand spread out along the savanna as the sun sets in Nairobi, Kenya 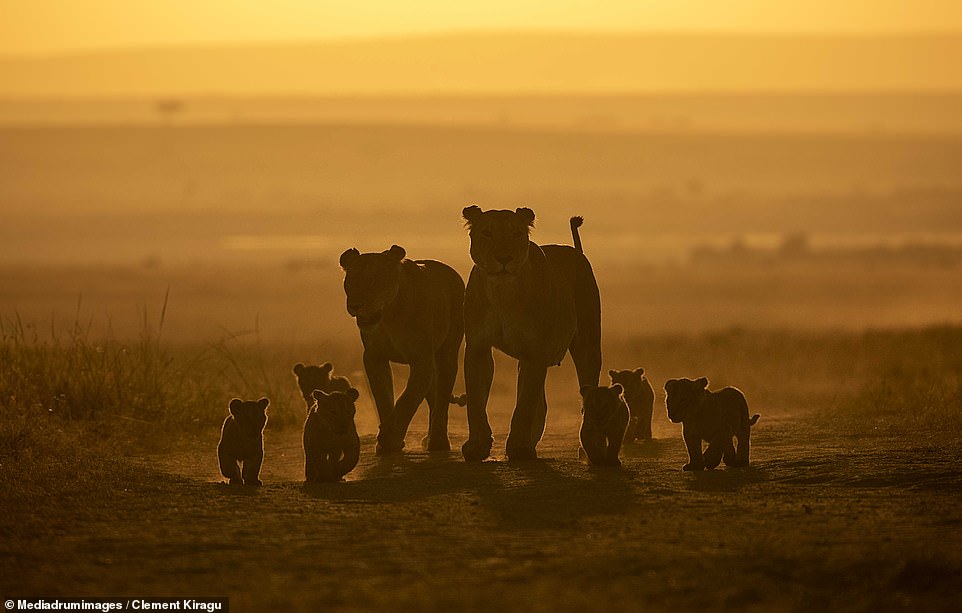 A pair of lionesses walk along the dusty plains flanked by their playful cubs during Africa’s golden hour, before sunrise and after sunset, in Nairobi, Kenya 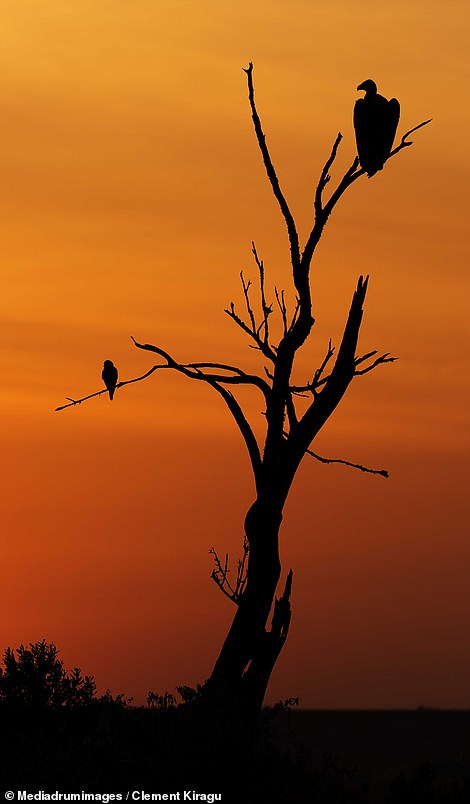 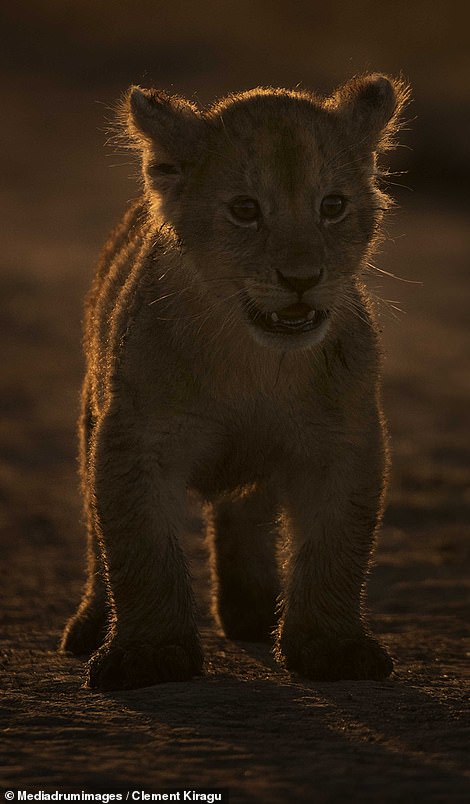 Vultures sitting in a twisted, knotted tree, watch the sun sets over the African savanna (left), while a lion cub walks along the dusty plains, his fur lit up by the warm morning light in Nairobi, Kenya 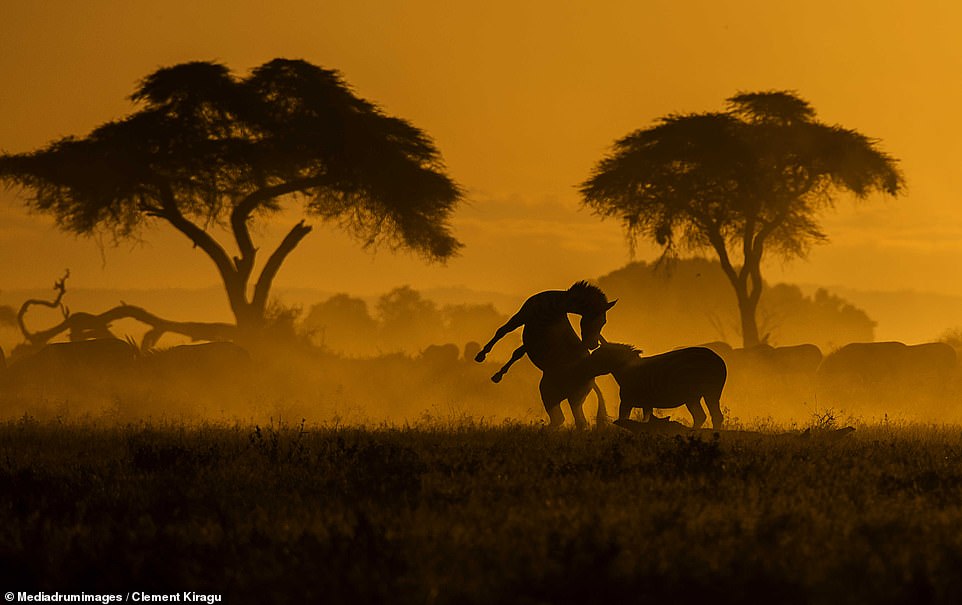 Horses buck and play as the sunrise causes a haze to creep through the savanna in Nairobi, Kenya, during Africa’s golden hour 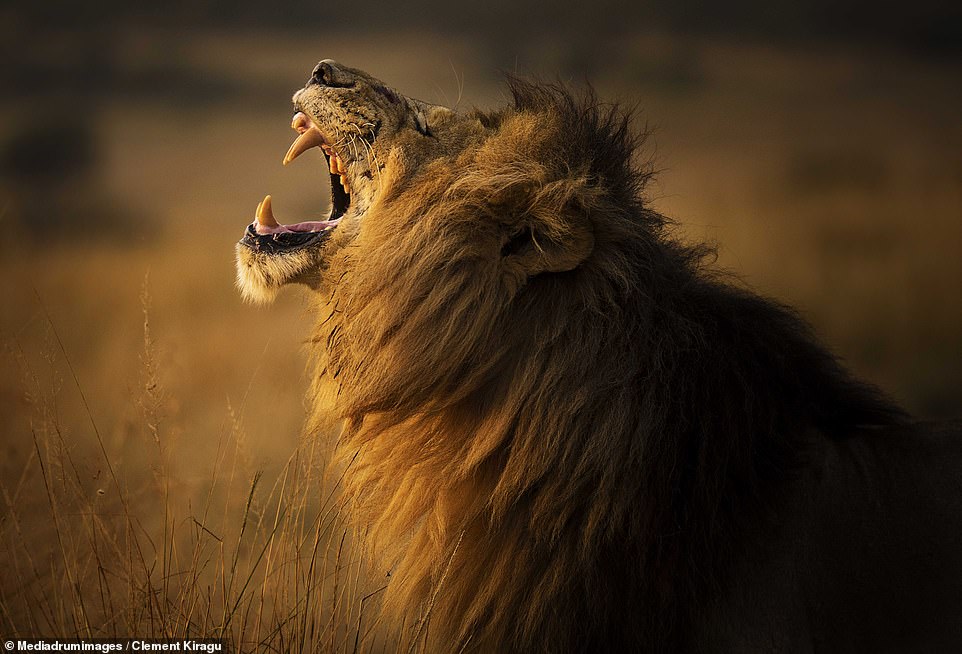 The sun lightens the face of an alpha lion during Africa’s morning golden hour in Nairobi, Kenya. Lions in particular are mainly nocturnal or crepuscular – and so they become active at sunrise and sunset 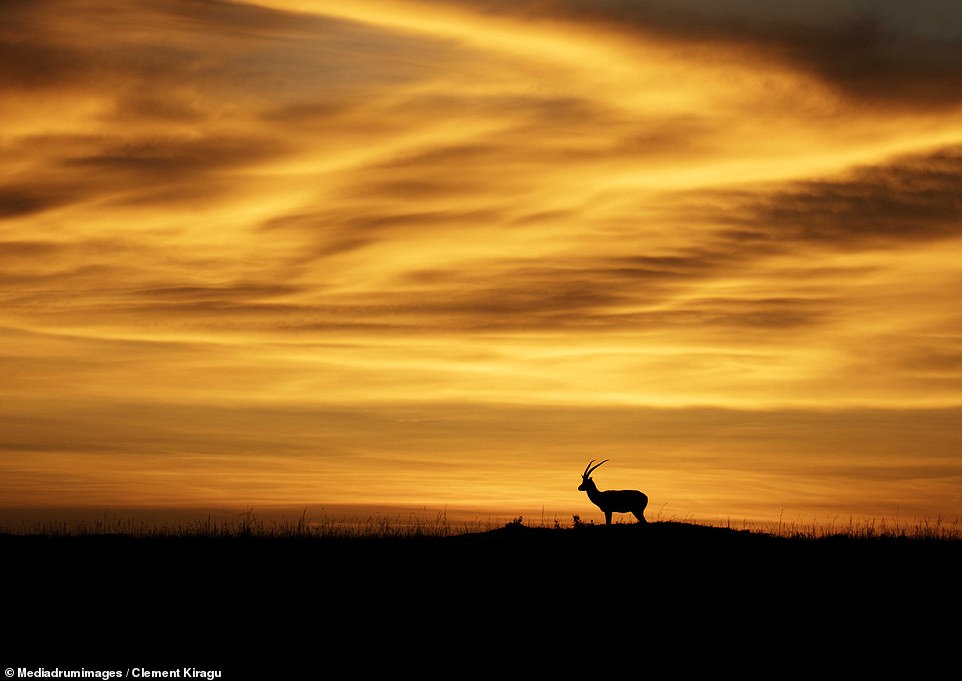 A lone antelope appears as a dark shadow, silhouetted by the golden sky and sun in Nairobi, Kenya 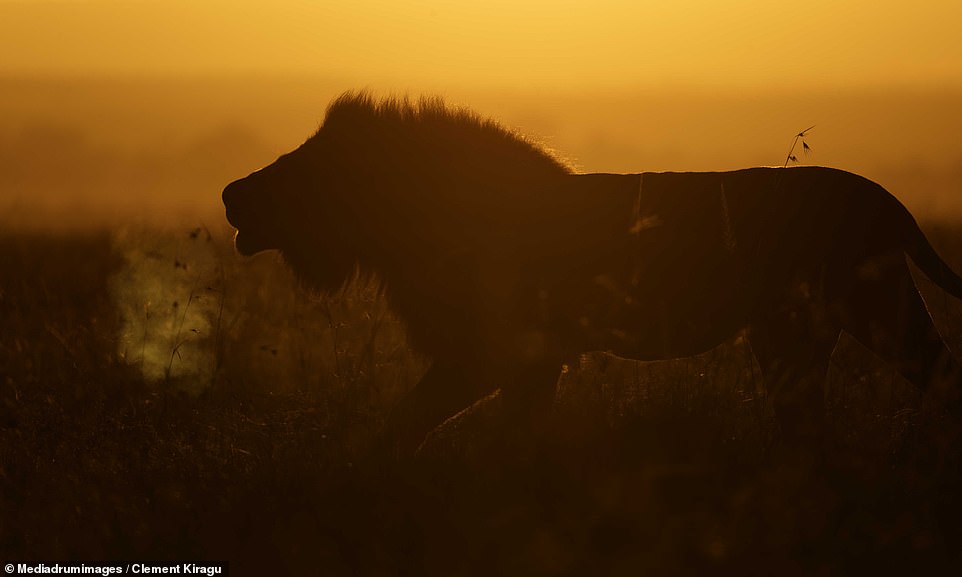 The warming sun casts a silhouette of the lion in the hazy light. As nocturnal creatures, lions can spend up to 20 hours a day resting to avoid the scorching daylight African sun 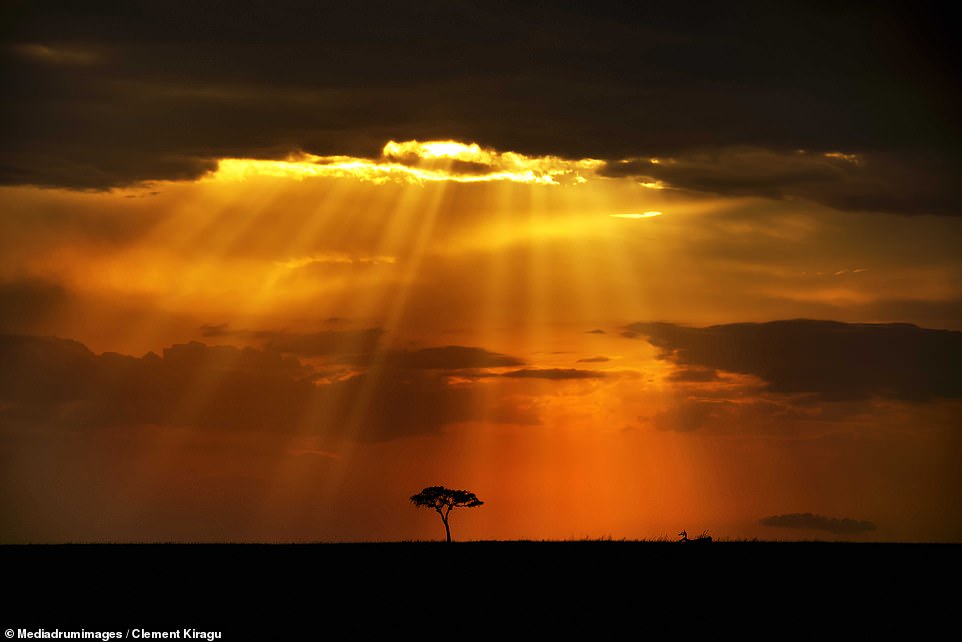 Pictured: The sun’s heavenly orange rays beam down onto a lone tree in Nairobi, Kenya. The collection of images were captured in a 17-hour snapping session by photographer Clement Kiragu from Nairobi

Funeral for Brisbane mum Hannah Clarke and her three children