Albanian drug smuggler, 34, held in a British jail on remand takes part in a 25-minute television interview via Skype from his prison cell

A jailed Albanian took part in a television interview from his UK prison cell using a smuggled phone, it has emerged.

Afrim Imeraj, 35, chatted with the presenter of Without Trace in his homeland.

Imeraj is currently on remand and is due to be sentenced for drug smuggling, The Sun reports.

During the twenty-five minute show the father-of-two told presenter Odeta Dume he was looking to find his two daughters, Larissa and Clea, who he had been separated from. 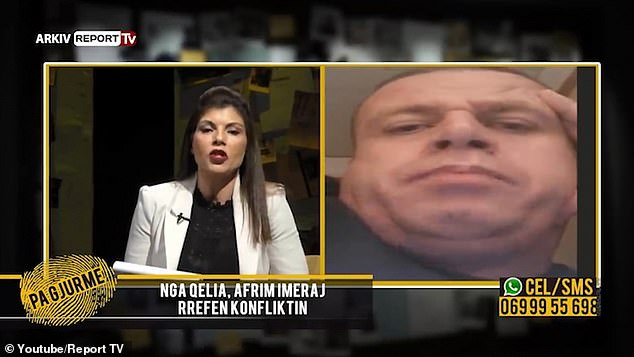 Odeta Dume spoke with Afrim Imeraj, 35, from his prison cell in London – via Skype

Imeraj told Pa Gjurmë on Report TV he came to the UK illegally but his wife disappeared with their children soon after.

According to Imeraj, their relationship deteriorated shortly after the daughters were born and he was arrested in London on March 23, 2017.

‘After six months the conflicts began, that we were not together and that I had the sentence,’ he said.

It is believed he is in HMP Pentonville.

The Skype chat was broadcast on the crime show which has millions of fans.

The host finished with: ‘Thank you for joining us via Skype. I know it must be hard for you.

‘In London it is illegal to have a telephone in jail. So, I would suggest that you switch off your telephone now because you could get punished heavily.’ 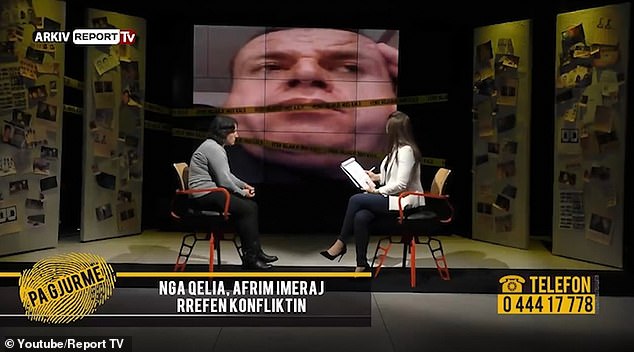 Imeraj is awaiting sentence in HMP Pentonville in London, according to reports. He was looking for his two daughters

The prisoner said he expects to be released between May and March, next year.

She claimed his mother-in-law had called in to say his girls were in Germany.

The problem of phones in prison has sparked a major crackdown by the government as videos mocking the system appear online weekly.

The Ministry of Justice is to recruit and train 100 new staff for squads to combat gangs and organised crime inside prisons.

Figures show there were 32,559 assaults in the last year to Ocotber – on average one every 20 minutes. It is claimed this is fulled by organised gangs in prisons using mobile phones to smuggle drugs and other contraband.