All aboard Sadiq Khan’s gravy train! GUY ADAMS on why the average Transport for London salary is now £83k despite £11bn debts and the Mayor’s delay-ridden £15bn Crossrail that was meant to open TOMORROW

Like many commuters, Brian Woodhead wastes much of his life navigating London’s creaking transport network, travelling from his home in a village just outside Hitchin in Hertfordshire.

The journey may be gruelling, but it does come with a perk — a salary that most British workers can only dream of.

Yet if you thought this sort of fat-cat package was reserved for high-flying bankers, City lawyers, and hedge-funding members of London’s corporate elite, think again.

For this 58-year-old graduate of the University of Huddersfield is actually on the books of one of our most generous state employers. 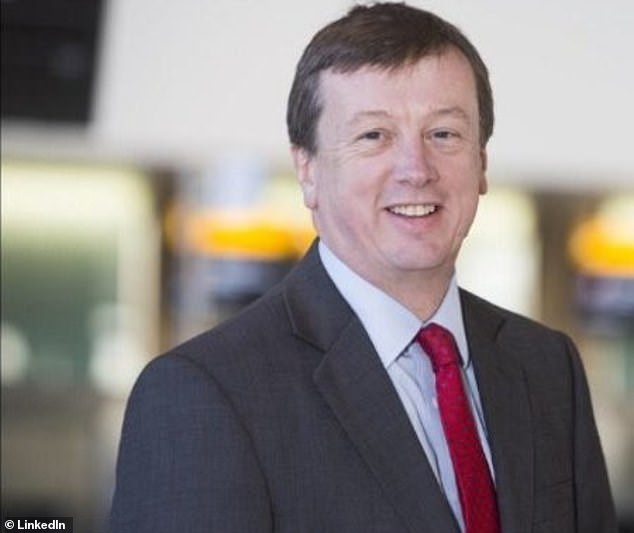 He’s the Customer Service Director of Transport for London (TfL), a quango run by London Mayor Sadiq Khan, which is in charge of the capital’s road, rail and bus networks.

Woodhead is just one of 63 TfL staffers who last year took home more than £200,000, and sits in the third tier of the organisation’s managerial flow-chart. Last week, he was at the centre of a heated party-political row.

To blame was a press release by the London Conservatives, accusing Mayor Khan of wasting tens of millions of pounds on ‘eye-watering pay rises’ to TfL staff. The document contained extraordinary revelations about employment practices at the organisation, alleging that behind the steel and glass exterior of the HQ in Greenwich, South-East London, Khan is presiding over a culture of untrammelled corporate excess.

It noted, for example, that TfL’s 26,994 staffers last year took home a combined £2.25 billion, according to its last annual report. That equates to an average of £83,337 each. The gargantuan, some might say scandalous, figure is unrivalled almost anywhere in the public sector. It’s higher than the equivalent at some of London’s major finance houses. What’s more, it represents a 17.6 per cent rise from the previous year, when 27,131 people on TfL’s payroll earned £1.96 billion, equating to £71,238 each. 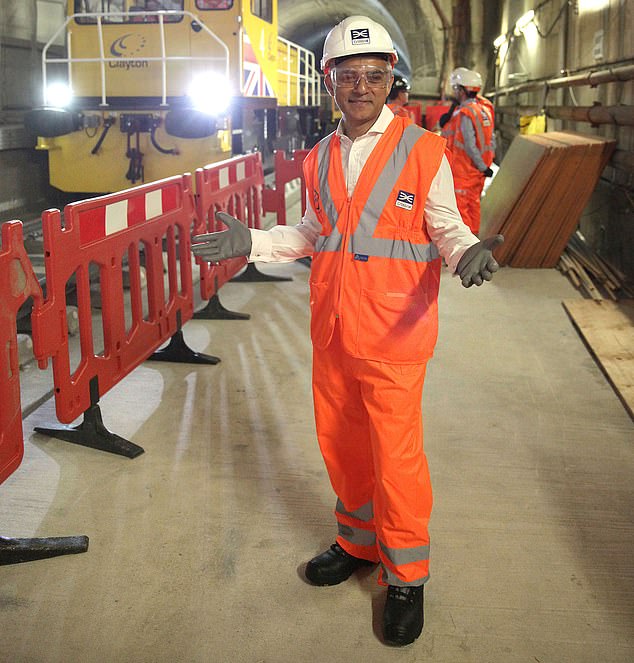 Woodhead is the Customer Service Director of Transport for London (TfL), a quango run by London Mayor Sadiq Khan, which is in charge of the capital’s road, rail and bus networks

In comparison, the Tories point out, Khan’s predecessor as TfL chair Boris Johnson, was a model of restraint. He oversaw the employment of 27,501 staff on an average of a mere £70,615, at a total cost of £1.94 billion.

The press release also pointed out that the stewardship of the Labour Mayor, who took office in May 2016, has seen TfL employees on more than £100,000 a year spiral upwards at an equally stratospheric rate.

The small army of TfL staff trousering salaries upwards of £150,000 has also grown from 90 to 154, up 71 per cent over the same period. Those on more than £200,000 have increased from 46 to 63, a rise of 36 per cent. Like all TfL employees, they receive pension contributions of around 35 per cent of salary (three times the rate of local government employees) and free travel across the capital for both themselves and a member of their household, a perk worth £2,500 per person per year.

Meanwhile, the higher tiers of this pay pyramid contain staff on individual packages which seem, to a layman at least, astonishing.

Woodhead is a case in point. His £292,000 is around 3.5 times what the average UK company pays its customer services director, according to research by the recruitment firm CV-Library, which advertises almost 14,000 customer services jobs each month and maintains a database of 14 million CVs.

It is also substantially more than is paid for the equivalent job in New York. There, the most senior executive of its Transport Authority, Andy Byford, was hired on a promise of a mere $325,000 (£255,000) salary.

Several owe their pay increases to a ‘restructuring’ of TfL overseen by Mayor Khan which saw a total of £51.4 million paid in ‘golden goodbyes’ to 704 departing staff.

TfL argues that a large proportion of last year’s highest earners owed their remuneration to pay-offs and one-off bonuses, rather than regular income, and says the number of staff on basic wages of over £100,000 has slightly fallen in recent years. It claims that it pays market rates to attract top global talent.

Be that as it may, such free spending would perhaps be easier to stomach were TfL a model of solvency. But in fact, it’s almost comically dysfunctional. Indeed, under Mayor Khan’s leadership, it increasingly finds itself mired in financial crisis.

The organisation, which has an annual budget of £10 billion, was more-or-less solvent two years ago, but now finds itself losing cash at a rate of around £1 billion a year. 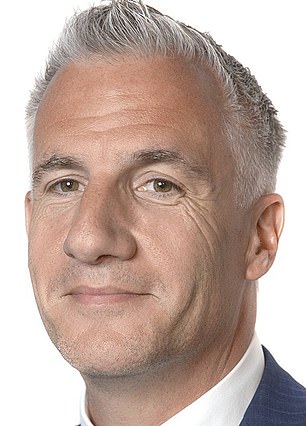 Overall debts are more than £11 billion, meaning it’s unable to borrow further under local government rules, and inside City Hall there are fears they may be forced into the humiliating position of requiring Transport Secretary Chris Grayling to take over its management. To blame are a combination of events that occurred on Khan’s watch, from the phasing out of a £700 million-a-year government grant, to a somewhat reckless decision by the Mayor to freeze fares, costing around £640 million annually.

Then there has been a drop in passenger journeys which caused him to underestimate revenue by around £230 million.

The latter fall, partly caused by more people working from home, was exacerbated by the gridlocked state of London’s roads under Khan’s reign. With average traffic speeds of around 8mph, many Londoners are abandoning buses and choosing to walk or cycle instead.

Adding to problems is the impact of costly, politically motivated PR stunts, such as the decision to ban so-called ‘junk food’ advertising on TfL’s network, at an estimated cost of £20 million.

Perhaps the most damaging misstep, however, concerns Crossrail, the £15 billion new Tube line that will eventually run from London’s western suburbs into deepest Essex, linking Maidenhead and Heathrow Airport, with Paddington, Canary Wharf with Shenfield and Abbey Wood.

When Khan took office, the project was on time and budget. Its central section, which runs through the West End, was scheduled to be opened by the Queen this month. But now it seems unlikely to open until late next year, costing TfL an estimated £600 million in lost revenue.

It’s also running rapidly over budget, having required loans of almost £1 billion to stay afloat in recent months, and is expected to need ‘hundreds of millions’ more in the New Year, according to a Financial Times expose.

The delay is the subject of an investigation by auditor KPMG, appointed by Khan despite having worked extensively on the project, leading a former Tory Minister, Greg Hands, to claim it was hired to deliver a ‘whitewash’.

In a second political row, Khan was accused of misleading voters and (crucially) the financial markets over its state of Crossrail. At the centre of this kerfuffle is the fact that neither the public, nor bond-holders who own Crossrail’s debt, were informed that the opening deadline would be missed until August 31, when it was announced that another year was needed for ‘safety testing’.

A week later, amid growing criticism of his stewardship, Khan informed the London Assembly he’d been blindsided about the problems by Crossrail managers, claiming he’d found out about this delay only some two days earlier. He was, he claimed, ‘frustrated, disappointed and angry’. However, Crossrail’s then chairman, Sir Terry Morgan, sacked by Khan last week, has recently claimed that answer was quite simply untrue.

In a number of interviews, Morgan alleges he informed the Mayor that a delay was inevitable at a face-to-face meeting on July 19. A nine-page document that he presented at that meeting is said to have stated that ‘delivery in 2018 is not feasible’.

Although Khan denies telling lies, his regime (which he promised would provide ‘the most transparent, engaged and accessible administration London has ever seen’) has spent the past two months blocking attempts by news organisations to gain access to the crucial document under the Freedom of Information Act.

Last Wednesday, the London Assembly’s transport committee was therefore forced into the unprecedented step of issuing a summons for it to be published.

The contents, when they emerge, could be hugely important, because Khan is required by law to promptly inform the financial markets of any issues which may affect the value of investments held by Crossrail’s bondholders.

The Financial Conduct Authority says it is ‘aware of and is reviewing’ the matter.

If Khan’s reign were proving an untrammelled success, he could perhaps ride out this storm.

But in his first two years in City Hall, knife attacks in London soared by 21 per cent, shooting incidents by 23 per cent, street robberies by 33 per cent, motorbike robberies by 50 per cent and murders by 44 per cent. There have been more than 120 murders in the city this year.

Khan blames government cuts to police budgets, though critics argue that there’s nothing to stop him spending some of the millions he’s splurging on staff salaries, at TfL and elsewhere, on employing more coppers.

He’s also failed to fulfil other promises, including one to build 80,000 affordable houses a year (his tally so far is 21,461). On the transport front, he promised ‘zero days of strikes’, saying they were ‘a sign of failure’. So far, there have been 18.

This New Labour-style spin has led critics to dub him Britain’s most vain politician. Maintaining a 24-hour brand costs lots of money — supplied by taxpayers.

During his first year, 21 more staff were put on the Greater London Assembly payroll. During his second, another 93. Over the two years, overall numbers rose 14 per cent, from 795 to 909. By November, the figure was 953 (almost 250 more than during the Boris Johnson era), costing an extra £9 million a year. The number on more than £100,000 was up by a quarter.

It has since emerged that he intends to hire almost 100 extra staff next year.

Meantime, the headcount in Khan’s private office has increased by 23 per cent, from 48 to 59, since he took office. The cost of employing them is up by 60 per cent, from £3.8 million to £6 million.

These are big numbers, and opponents understandably wonder what all these people do all day. But whether in Khan’s own office or elsewhere across his sprawling empire, working for London’s increasingly profligate Mayor sounds like very nice work if you can get it.

Mum and boy, 14, in court charged with murdering Logan, 5, found dead in river