All adults in Wales will have been offered a coronavirus jab by Monday, Mark Drakeford said today.

The First Minister said the milestone will be hit six weeks ahead of the overall UK target for giving vaccines to everyone over the age of 18 by the end of July.

Wales has given a first jab to 2.18million people, or 86 per cent of the adult population, which is currently the best record of any country in the world.

However, Wales is lagging behind England and Scotland when it comes to the proportion of the population who have received both doses.

Mr Drakeford told a press conference in Cardiff: ‘We will make the offer of vaccination to all eligible adults six weeks ahead of schedule and we expect to reach 75 per cent take-up across all priority groups and age groups a month ahead of target. 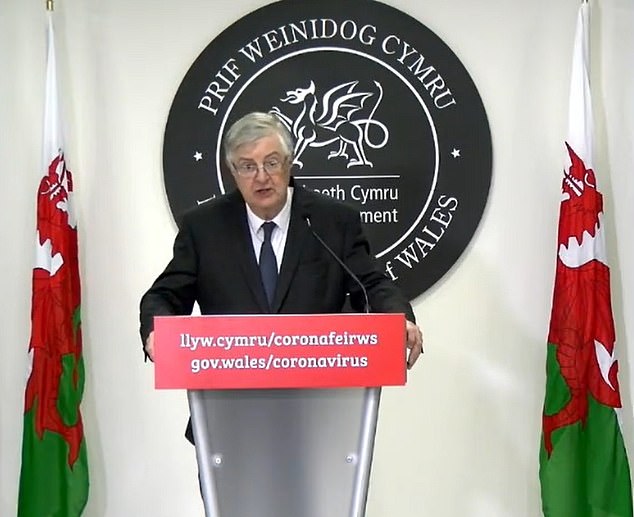 All adults in Wales will have been offered a coronavirus jab by Monday, Mark Drakeford said today 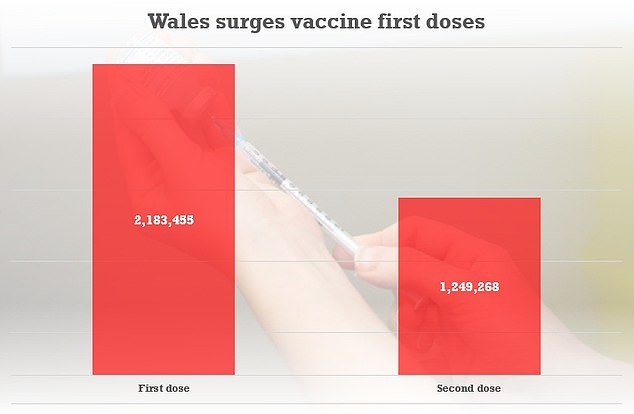 ‘This is a remarkable achievement and a tribute to the hard work of all those involved in the programme – to all those doing the complex work of planning behind the scenes and to the thousands of people vaccinating and helping to run the clinics across the country.’

He said the government would now ‘switch our efforts to accelerate second doses’, with a target of covering the whole population by September.

‘Subject to supply, we’re confident that we can deliver second doses as fast and as successfully as we have first doses,’ he said.

The updated strategy expects to deliver around 28,000 second doses every day over the summer months.

Mr Drakeford said he expected a first dose uptake of 75 per cent across all priority and age groups, and that Wales’ success was because its programme ‘uses every drop of vaccine, stores it in people’s arms, not in fridges, and absolutely minimises the waste of the vaccine so we can use every single drop’.

He said having a high level of second dose uptake ‘gives us more options for the future, hopefully meaning that we can live with fewer restrictions’.

Mr Drakeford said the emergence of the Indian variant – also known as the Delta variant – highlighted the importance of getting both doses.

There are still 97 confirmed cases of the variant in Wales, with clusters located in Conwy in the north-east.

Mr Drakeford said the government was ‘very confident’ vaccinations were breaking the link between illness and hospital admissions with the Kent variant, but more information was needed whether that was true with the latest mutation.

‘The preliminary evidence is a bit mixed on it,’ he said. 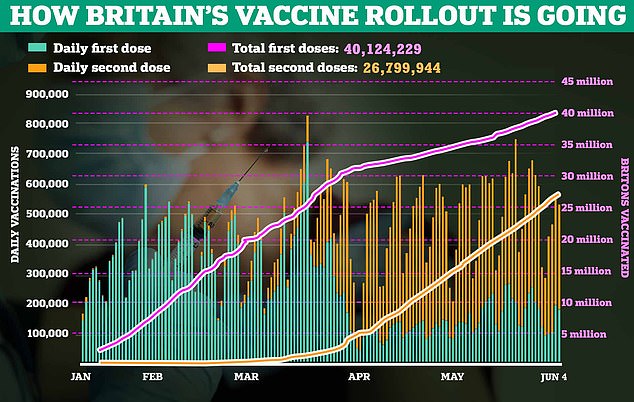