Alok Sharma has risked accusations of pandering to Beijing after Chinese state media claimed he ‘hailed’ the country’s efforts to tackle climate change during an official trip.

Mr Sharma visited the country this month in his role as President of the Cop26 climate change summit which is due to take place in Glasgow in November.

China is the world’s biggest emitter of climate-warming greenhouse gases and is under pressure to announce more ambitious measures to crackdown on coal production and consumption.

Mr Sharma has also been accused of dodging an interview with the BBC while he was in the country. 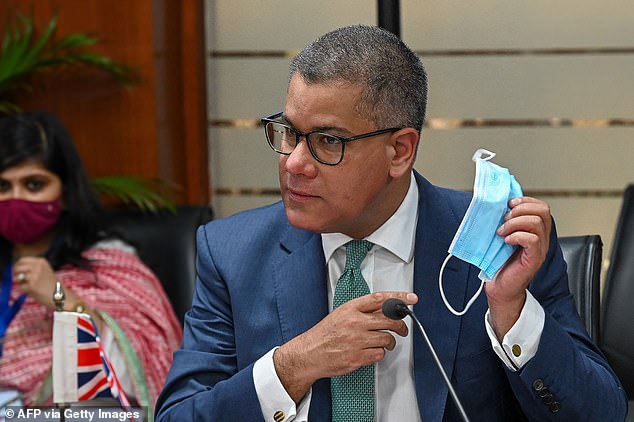 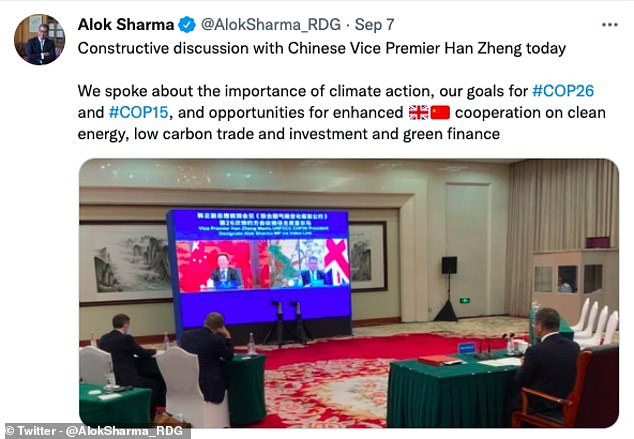 A report published in May this year found China released a greater volume of greenhouse gases in 2019 than all of the world’s developed nations combined.

Experts from research firm Rhodium Group in tandem with Breakthrough Energy said global emissions had risen 11.4 per cent over the last decade, reaching 52 gigatons of carbon dioxide equivalent in 2019, with China responsible for 27 per cent of this.

The second-worst emitter was the US — accounting for 11 per cent of the total — with India edging out the EU for the first time to come in third at 6.6 per cent.

He said: ‘We spoke about the importance of climate action, our goals for #COP26 and #COP15, and opportunities for enhanced cooperation on clean energy, low carbon trade and investment and green finance.’

Mr Sharma’s visit to China has not received the same level of fanfare as some of his other trips as the UK tries not to alienate the country’s leadership as it seeks to persuade Beijing to do more to tackle climate change.

Critics want ministers to take a much tougher approach and to demand Beijing take greater action to reduce emissions.

Mr Sharma has faced accusations of dodging an interview with the BBC during his trip.

The broadcaster’s China Correspondent, Robin Brant, said he had been ‘left with nothing’ despite attempts to secure an interview.

Mr Brant said the failure to secure an interview had been blamed on ‘last minute diary constraints’ as he pointed out ‘the only reporting’ on the visit had come from Chinese state media.

Revealed: The Inside of the 'Caspian Sea Monster'