‘Forget languages of hatred and political advantage’: Archbishop of Canterbury uses Christmas Day speech to hint at divisions over Brexit

The Archbishop of Canterbury has used his Christmas Day sermon to call for the country to forget the ‘tribalism’ and ‘rivalry’ of politics.

The Most Rev Justin Welby has previously spoken out against welfare, tax, inequality and Brexit this year.

Earlier this month he said it could take society ‘ten years’ to reconcile after Brexit, thanks to a referendum that has opened ‘so much bitterness’.

Justin Welby also warned that politicians face a moral choice when considering the prospect of no deal and previously stated a second referendum could be dangerous.

The archbishop denied he had gone too far in his political statements. 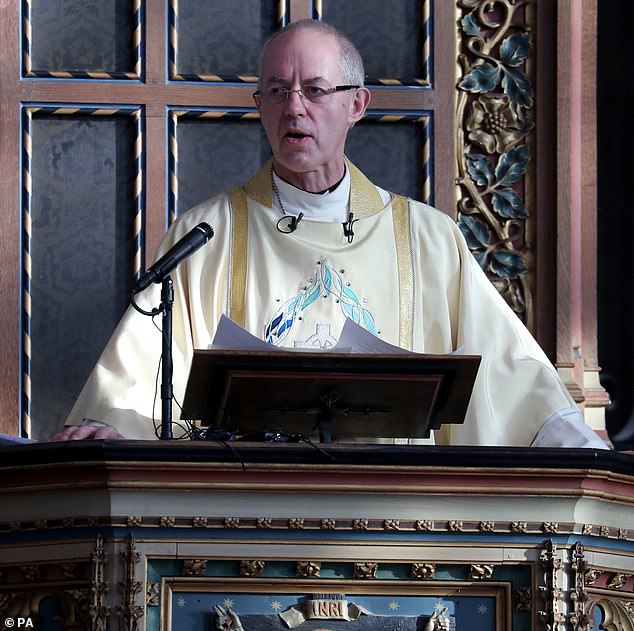 Archbishop of Canterbury, The Most Rev Justin Welby, used his Christmas Day sermon to call for the country to forget ‘tribalism’ and ‘rivalry’

Rev Welby told worshippers today at Canterbury Cathedral that the ‘language of love’ is spoken by God ‘for the poor and suffering and oppressed in every place at every time’.

He said the world does not stop because it is Christmas.

‘To think so is a dangerous illusion because God came into the reality of the world, to change it, not to give us an escape from it,’ he said.

The archbishop told the congregation: ‘God’s language of love is exclusive. It requires us to forget other languages of hatred, tribalism, rivalry, political advantage and of materialism, pride, greed, and so many more.

‘God’s language of love is not mushy sentiment. In the Bible we see the richness of its vocabulary.

‘The baby in the manger lives it flawlessly before he can speak a word, because by his mere existence he is the word of God to us. 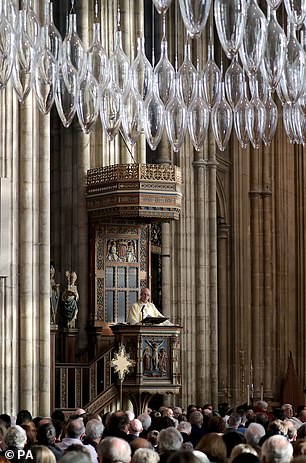 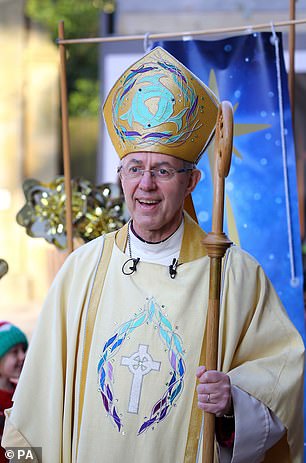 Archbishop of Canterbury, Justin Welby, delivers his sermon during the Christmas Day service in Canterbury Cathedral (left) and arriving before the service (right)

‘It can be spoken by the generous and wealthy and powerful.’

The sermon came after thoughts of peace, joy and sadness were raised in the Christmas messages of the Bishops of the Church of England.

The bishops spoke of modern-day challenges from modern slavery to political divisions and urged people to remember those who struggle with Christmas as a lonely or difficult time of year.

Cardinal Vincent Nichols, the archbishop of Westminster and the most senior Catholic in England and Wales, told a congregation at midnight mass on Christmas Eve that ‘we are in difficult times, times of uncertainty and an absence of consensus’.

Churches were providing help on food poverty and homelessness, but more volunteers were needed, he added.

Graham Usher, the Bishop of Dudley, recalled a recent visit to Bethlehem but also thought of divisions that are closer to home.

He said: ‘Our current political debates also put up barriers between those who voted in different ways.

‘Our country needs, more than ever, to seek grace and generosity in our political conversation so that there are not winners and losers, just the flourishing of all.’