Are these Britain’s worst Christmas trees? A metal one that looks like ‘a bit of scaffolding’, shabby balding efforts and scarcely-decorated ones compete to be country’s biggest festive fir flop

Festive cheer appears to have already ran out in towns across Britain as locals have bemoaned the shocking Christmas trees that have been put up across the country.

Residents in Birkenhead, Tyldesley, Crosby, Ashington, Compstale, Newry and Muswell Hill have all complained about their town’s shoddy attempts at Christmas decorations.

Whether it be unconventionally shaped firs or poorly decorated trees, people have been making their feelings known about their town’s shortcomings ahead of Christmas day. 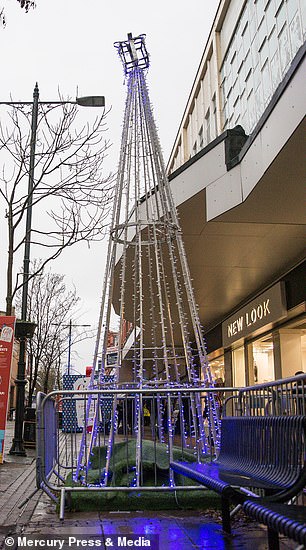 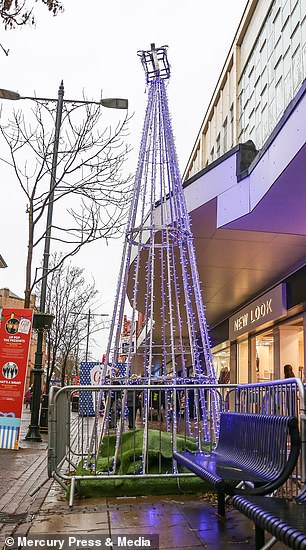 In Birkenhead, residents described the tree a ‘waste of space’ that looked like ‘scaffolding’.

The hollow, cone-shaped metal frame with LED lights was installed in the city centre by the Wirral Chamber of Commerce.

The tree, with a solitary Christmas present instead of an Angel or Star on the top of the structure, is meant to symbolise a point of pride for the town which has now become a representation of disappointment.

Local residents have insisted that the Wirral Chamber should not have bothered putting the tree up.

Another man, 65, added: ‘It’s aesthetically appalling. It looks like a piece of scaffolding and they seem to have lost interest when they got to the ballast at the bottom. 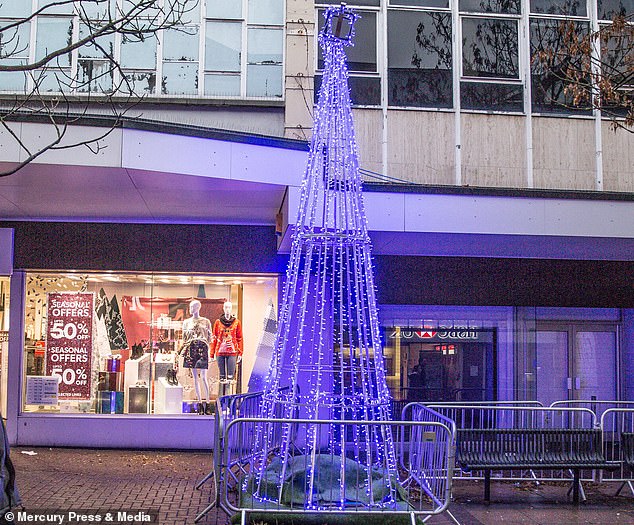 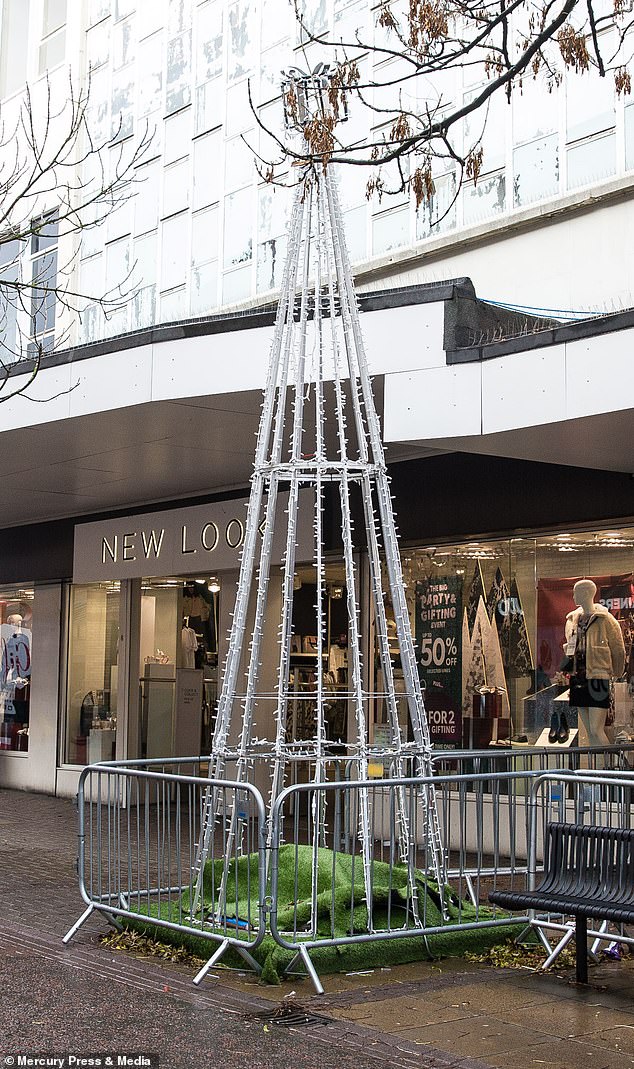 A present sits on top of the metal structure, instead of the traditional Angel or star which usually adorns the tree

‘And then there’s the crash barriers – as though they’re going to keep people back from it.

‘And the parcel at the top is truly appalling – but wonderfully so. It sort of sums Birkenhead up really.’

Lesley Thompson said the ‘awful’ tree inspired a longing for Birkenhead’s Christmases past, which he described as ‘spectacular’.

The 52-year-old said: ‘Awful, isn’t it? Says it all doesn’t it for Birkenhead now. There’s hardly any shops now are there?’ 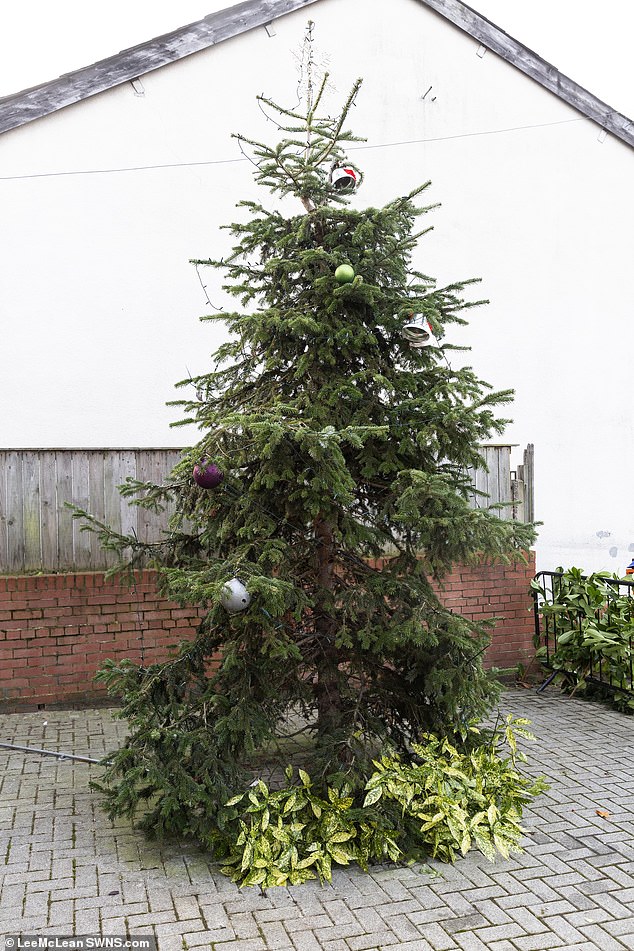 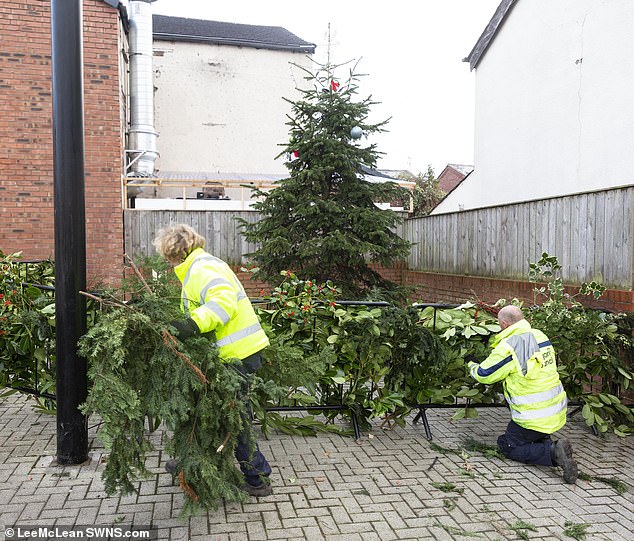 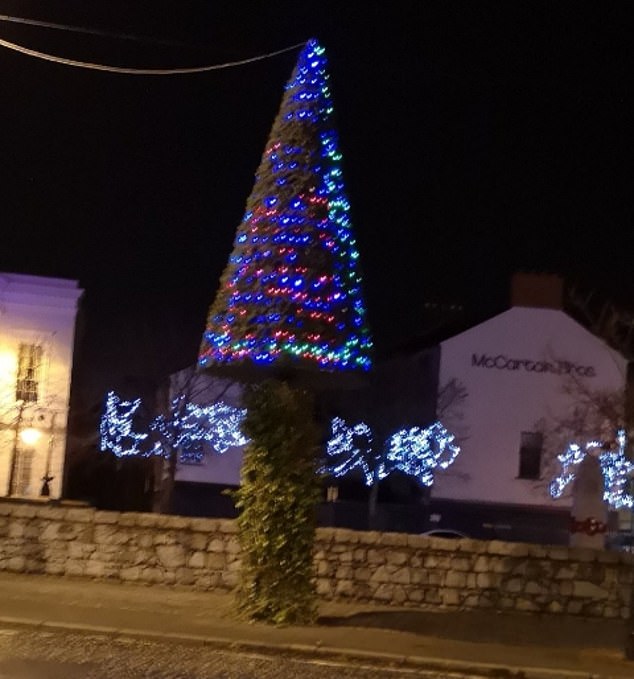 This bizarre Christmas tree resembles a pointy mushroom. The tree was spotted in Newry, Northern Ireland

Not everyone was disppointed with the tree, as local businesses voiced their support of the bespoke design. 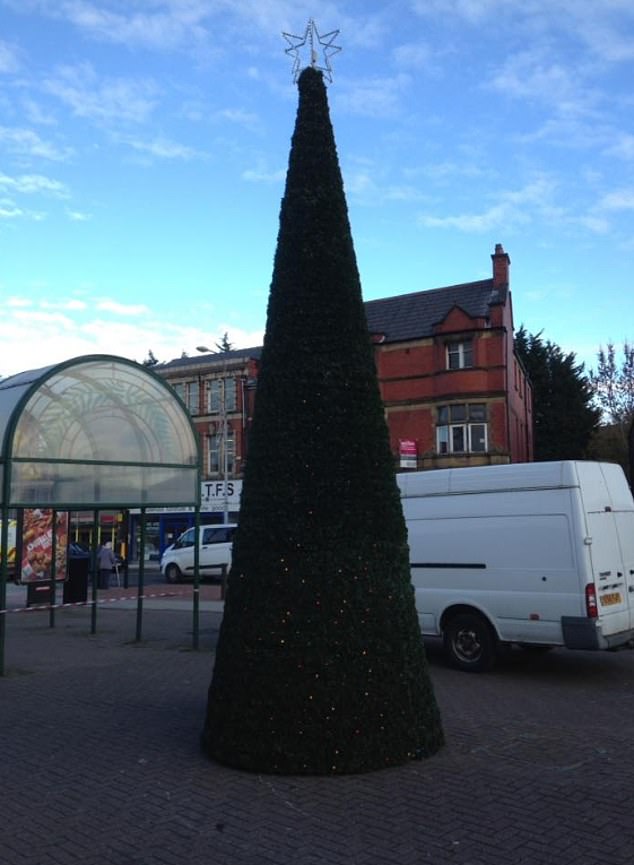 Farnworth’s ‘pretend’ Christmas tree has come under fire for its cylindrical shape, as opposed to a traditional tree 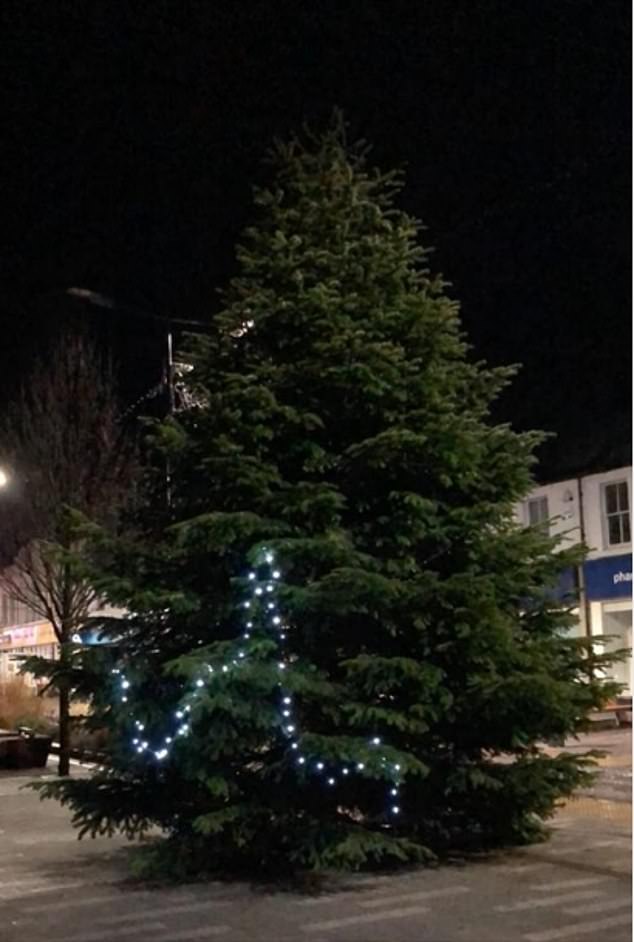 While the tree in Ashington may be large, there does not appear to have been much effort put into decoration as a few lights hang off the side of the tree 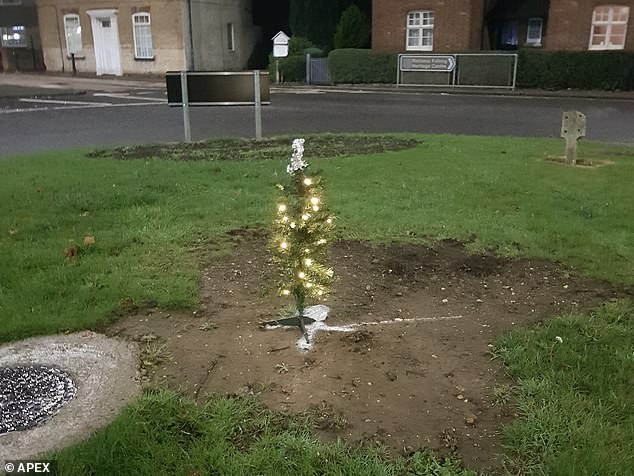 This tiny Christmas tree appeared on Scartho, Grimsby. At least some effort was made on the decorations. North East Linconshire Council removed the village’s beloved but diseased cherry tree this time last year

Meanwhile a Christmas tree erected in Tyldesley, Greater Manchester, was labelled the ‘worst in the country’.

Rebecca Rowland, 36, posted a picture on Twitter of the dowdy tree, decorated with around five baubles and an unremarkable star on the top.

In her post, she wrote: ‘Tyldesley’s 2018 tree. If there’s a worse one in the country I’ll sit on the top myself.’

Wigan Council responded by saying it would be working with traders to decorate the meagre 8ft tree. 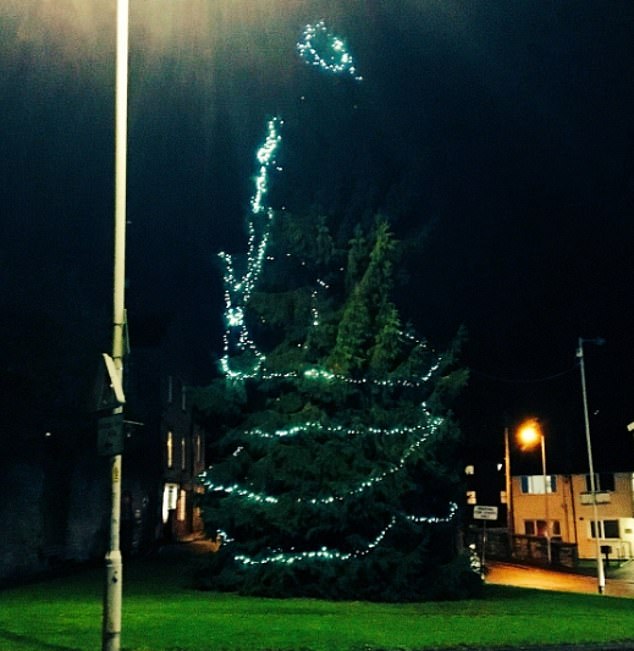 This tree in Compstall, Stockport, was labelled the ‘worst dressed public Christmas tree’ by one unhappy Twitter user

Council bosses told how it isn’t a purpose-bought Christmas tree, it is a living tree, and the reason it looks the way it does is because it hasn’t quite finished growing.

Resident in Muswell Hill were quick to berate the poor attempt in their leafy London suburb.

After the criticism it received over its appearance, the tree was later spruced up with decorations and given new barriers.

Next coronavirus stimulus bill will include $1.2k checks and extend the ban on evictions, White House vows as deal looms