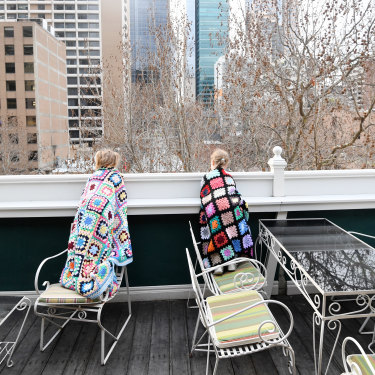 The dream that was Madame Brussels, on a rooftop in the heart of the city, has come to an end after 15 years.Credit:Justin McManus

After hundreds of sleepless nights, Michael Anderson has no tears left to shed.

His beloved Madame Brussels, a buoyant and brazen Melbourne institution that had fizzed and popped on a Bourke Street rooftop over two decades, will soon close, a casualty of COVID-19. He and co-founder Paula Scholes, aka peerless hostess Miss Pearls, are sad; and like many, they are also exhausted by a pandemic that has sucked life from the heart of the city.

“I’m cried out a long time ago,” Anderson says as he prepares to walk away from the bar he brought to life 15 years ago. He is hopeful a successor can be found to take over the lease. But for now, “I’m trying to put one foot in front of the other and push through one step at a time and find the best possible outcome that I can. For everyone concerned”. 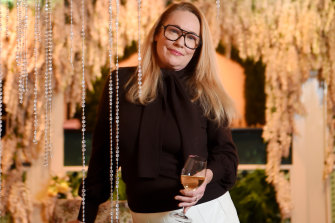 ‘I always tried to look on the bright side’: Paula Scholes, aka Miss Pearls.Credit:Justin McManus

The list of “everyone concerned” is a long one. There’s a couple of dozen staff, for starters, who will lose their livelihoods and a workplace they love. Heartbroken, too, will be the thousands of patrons who have embraced Madame Brussels as a destination and a sensibility.

Since COVID-19 emerged, Anderson has dreaded what is now coming to pass. Last drinks will be called on July 25.

“I’ve had probably three or four good nights’ sleep since last February,” says Anderson, currently recovering from back surgery. “And that was only because I was in a hospital knocked out with painkillers. But regularly, every morning, I’d wake up at 4am and start going through the lie of the land in my head.”

Scholes calls this the worst week of her life: her sister had an emergency requiring hospitalisation, and the call was made to shut Madame’s doors.

“I always tried to look on the bright side and always see, maybe, better times ahead,” she says.

A space to dream

It all began in late 2005 with a dream that was a blend of whimsy, history and bar-trade savvy.

The savvy came from co-founder and legendary impresario Vernon Chalker, who died last year. Chalker — the vision behind The Gin Palace in Russell Place among other drinking landmarks — and Anderson first thought the space atop 59 Bourke Street might be a place to live. It had been an optometrist’s office and the shell they leased offered little hint of the fairyland to come.

“Vernon showed me around and he said: ‘We’re thinking about being open on a Sunday for drinks’,” Scholes recalls. “I said: ‘No, you need to open this seven days a week, it’s going to be an amazing bar’.”

Anderson had a vision: a little bit Alice In Wonderland, a touch of Wisteria Lane (the backdrop to TV soap Desperate Housewives), with a colour scheme that evokes English garden parties and Wimbledon and a name that carries memories of the city known in the late 1800s as Marvellous Melbourne. Back then, the city’s most famous brothel was run by a certain Madame Brussels, aka Caroline Hodgson, whose Lonsdale Street premises serviced the top end of town, literally and geographically. 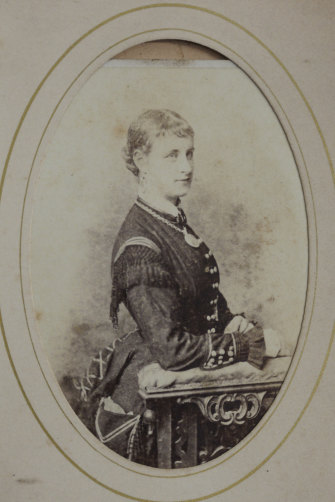 “There were lots of elements of magic,” says Scholes.

Anderson recalls brainstorming sessions that saw the potential of the outdoor terrace, which was at first not on their lease. “There was a bit of an alcohol-fuelled evening when we first took possession of the premises, and I found in Vernon’s bathroom a box of tissues that were quite vividly striped in pinks and greens. From that came the fake lawn and the pink walls and the white, wrought-iron garden furniture.”

Madame Brussels launched during the Commonwealth Games in March 2006 and slowly caught fire. “We were a hot new thing,” says Scholes. “And that first summer, leading into ’07, was just unbelievable. It was so busy.”

Madame Brussels became famous for its garden parties and for other functions — private affairs that sailed close to the edge of debauchery but never quite tipped over. As hostess, Miss Pearls was there to see to that. “We made it outrageous and fun, and naughty and juicy, but not falling over the edge. Except for one party when I did have some boys shucking oysters. With their penises.”

All in good fun, of course. The business was built with one target customer in mind: women.

“We’ve always been really conscious that women have been neglected in terms of licensed venues,” says Anderson.

Scholes adds: “We consciously created an environment that was a bit girly, a bit frivolous and silly and didn’t take itself too seriously. There wasn’t a TV, there wasn’t a poker machine. And we specialised in making pink drinks.” 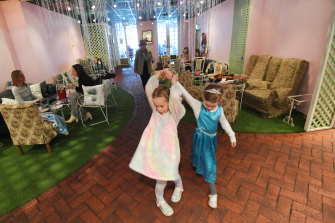 Harper and Scarlett, children of Madame Brussels customers, have a dance.Credit:Justin McManus

Tourists loved it, as did celebrities. Politicians from Spring Street were regulars (as they’d been with the original Madame Brussels) and celebrities found a haven. Pierce Brosnan, Ewan McGregor and Tim Burton were among the stars to grace its couches.

“It’s because it’s fun,” says Scholes. “We don’t want to harm anybody. And I think what you do is, you take everyone and have them thinking, ‘Oh my God, are they really going to do that?’, and it happens in their imagination but doesn’t really happen.”

For 15 years, it seemed the fantasy would never end.

“It’s the kind of pain that you want to put behind you.”

Anderson is remembering the dread that enveloped him in the early months of 2020. After 14 years of success, the new year dawned in a literal haze as Australia was overwhelmed with bushfires that hammered tourism and delivered Madame Brussels the worst summer of its life.

Then came word from abroad of a mystery disease.

“When the virus first started hitting the headlines, we felt a tremor go through the place,” he says. “We knew we were in for something that none of us had any familiarity with. We had the news of it tearing through Italy and other places and it became obvious that there were going to be travel bans at some point.”

By late March, the country was in lockdown. For the Madame Brussels team, it meant shutting the doors and cutting loose 26 staff. Anderson and Scholes prided themselves as employers and were rewarded with loyalty from their team. 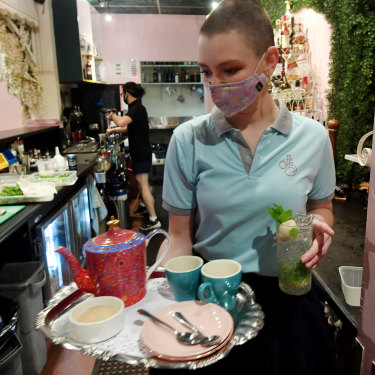 Ebony McMasters and Nick Triantafillopoulos at work behind the bar.Credit:Justin McManus

“They had been with us for years and years,” says Scholes. “We’ve put a lot of energy into training them, and helping them to understand the Madame Brussels ethos and aesthetic.”

It was that length of service that meant many staff were eligible for JobKeeper in the first lockdown.

The team spent weeks preparing for reopening. “Repainting and cleaning and putting in new hygiene protocols and double-wiping the banister rails and all this kind of stuff,” Anderson recalls. “And then we were open for three days before the second lockdown hit.”

What followed were “hours and hours with our accountants and bookkeepers, applying for every kind of grant and support we could lay our hands on”.

“We also invested a lot of time and energy in liaising with the City of Melbourne regarding initiatives that they were talking about.

“It was a nightmare … we were hoping there would be a degree of understanding and leniency and prospect for recovery. But in fact, we were stonewalled, and we’re not alone in finding that.”

For staff like Nick Triantafillopoulos, it was the strangest of years — mostly on JobKeeper, thankfully, but in constant limbo. “It was tough,” he says. “After the first lockdown, I was wondering, what’s going on? Am I going to get my job back? The last lockdown was extremely tough. There was no money.” 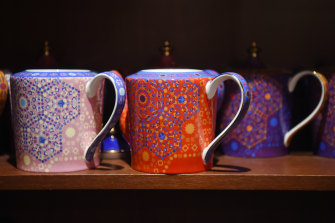 For his part, Anderson was suffering mentally.

“I think I’ve probably been suffering from fairly pronounced depression, but I haven’t pursued a clinical path because I know what it’s about. And I know I’ve got to push through. I’ve been working hard on reminding myself that there are a lot of people who are worse off than I am.”

By early 2021, the bar had slashed its hours and cut from seven days a week to five, sometimes shutting early because there were not enough paying customers to cover wages. “We were not matching up in terms of sales and and staff wages,” says Scholes. “There are percentages that you work from. And we just were not making it.”

“It’s been death by a thousand cuts,” says Anderson. “Our numbers were gently climbing upwards before the Valentine’s lockdown. That knocked all our skittles over and we were clawing our way back from that and the May lockdown happened.

“I looked at how long it had taken us to recover when we reopened in November last year. And that was with rent deferrals and government grants. And we managed to just kind of hang on. But I’ve been assiduously doing cash-flow forecasts and I can’t make the numbers stack up. We’re just chewing through our reserves.”

Ten days ago, Anderson made the call.

“I thought, we’ve got enough to pay rent for a couple of months. But how am I going to make it work? How am I physically going to put in the effort that’s going to be required to haul us through, especially when there’s no kind of clarity about a vaccination deadline? There’s no clarity about when the borders will be opened up. The future is is really uncertain. On Sunday, I contacted the venue manager and Pearls to say, ‘Look, guys, it’s not going to be possible to negotiate through this’.”

The dream that took off 15 years earlier was over.

One night this past week, the faithful gathered on the iconic Madame Brussels terrace as word spread: the place they loved, where they had danced and drank and found love and friendship, was soon to shut its doors. Some just had to come for one last raise of the glass.

“Every time we had a visitor, we brought them here,” says Deirdre Grealish, who was enjoying the terrace one last time. “When we heard it was closing, we thought we’d come down for a last drink. It’s really sad. It was the first quirky hidden bar we stumbled across when we moved here.” 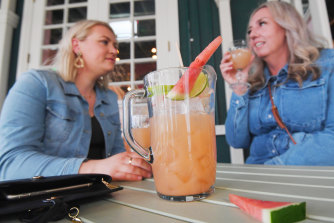 ‘It was the first quirky hidden bar we stumbled across’: From its inception in 2006, Madame Brussels cultivated a sensibility aimed squarely at women.Credit:Justin McManus

Behind the bar, Triantafillopoulos was expertly whipping up jugs of Pimms and trying to stay positive. But he will miss the place. “It doesn’t feel like work. Everyone works really hard, but it feels like family. I’ve seen a lot of people come and go, but they always say it’s like a family.”

Casting an eye over the terrace at twilight, Miss Pearls is doing what she has always done: raising a glass with a smile, keeping tears at bay as she wonders how it ever came to this. Even up amid the treetops and fairy lights, the city is counting the brutal cost of COVID-19.

Picturesque waterway banned by Facebook because its name is too rude