At least four children were hospitalized Thursday after strong winds sent a bounce house flying during a party in Arizona, according to reports.

The incident occurred at a residential park in Mesa, about 15 miles east of Phoenix.

Witnesses reported seeing the bounce house being lifted several feet in the air by a strong gust of wind, FOX 10 of Phoenix reported. Several kids were inside the inflatable structure at the time, authorities said, though it was unclear how many. 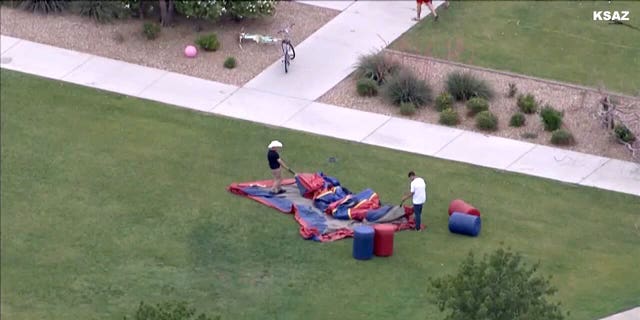 At least four children, ages 5 to 11, suffered moderate to severe injuries and were taken to a nearby hospital, according to FOX 10. It wasn’t immediately known if their injures were life-threatening, a fire department spokesperson told the Arizona Republic newspaper.

Police and Mesa Fire and Medical responded to the scene.

Wind gusts in the area approached 22 mph on Thursday afternoon, according to Arizona’s Weather Authority.

The incident occurred just days after a bounce house that was secured with stakes and sandbags went airborne during a “dust devil” whirlwind in Paulden, Arizona, about 65 miles southwest of Flagstaff.

The Yavapai County Sheriff’s Office said two girls, ages 6 and 7, were playing in the bounce house Sunday when heavy winds carried it about 25 feet in the air, “launching it over a fence and onto a neighboring property.”

On Monday, the sheriff’s office said the children were recovering at Phoenix Children’s Hospital.