Asian shares plunged as much as 10 per cent today as the coronavirus crisis brought more turmoil to financial markets.

Benchmarks in Japan, Thailand and India all dropped today in the wake of Wall Street’s biggest plunge since the Black Monday crash of 1987.

Tokyo’s Nikkei 225 fell nearly 10 per cent in the morning session, and ended more than six per cent down despite a partial recovery.

Another 10 per cent crash on India’s Sensex briefly halted trading while Australian shares had a wild day and the Hang Seng dropped in Hong Kong.

European stock markets showed early signs of a rebound from their worst day ever with the STOXX 600 index gaining four per cent.

Paris suffered its worst one-day loss ever on Thursday while and London and Frankfurt also had their blackest days since the late 1980s with losses of around 10-12 per cent. 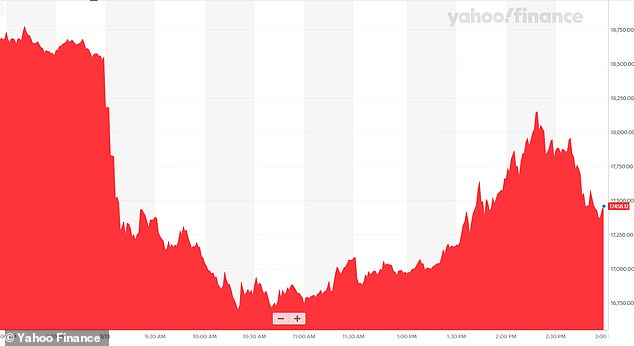 NIKKEI, TODAY: The Tokyo index dropped by 10 per cent in the morning session on Friday and ended six per cent down despite a partial recovery

The Nikkei was 16 per cent down over a tumultuous week in which Donald Trump’s decision to ban travel from 26 European countries has added to economic fears.

Trump’s comments suggesting delaying the Tokyo Olympics because of the coronavirus have also weighed on Japan’s markets, analysts said.

Losses were equally staggering outside Japan, driving MSCI’s broad Asia-Pacific index back to where it was in 2017.

Gold and oil fell and once-safe sovereign bonds slumped as investors liquidated everything they could to cover losses.

Hong Kong’s Hang Seng index fell five per cent at one stage, but ended only one per cent down. China’s Shanghai composite dropped three per cent.

In Bangkok, the Thailand SET gained 0.5 per cent after a temporary suspension of trading earlier in the day.

Australia’s S&P/ASX 200 had its wildest trading day on record, falling past eight per cent before surging in the last minutes of trade to settle 4.4 per cent higher.

State leaders in Australia agreed to increase spending to counter the impact of the viral outbreak. 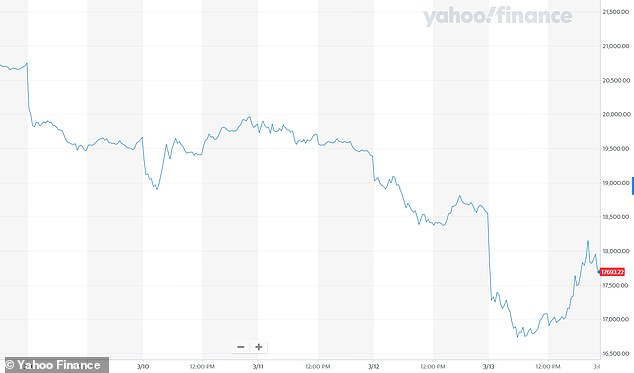 NIKKEI, THIS WEEK: The Nikkei was 16 per cent down over a tumultuous week in which Donald Trump’s decision to ban travel from 26 European countries has added to economic fears 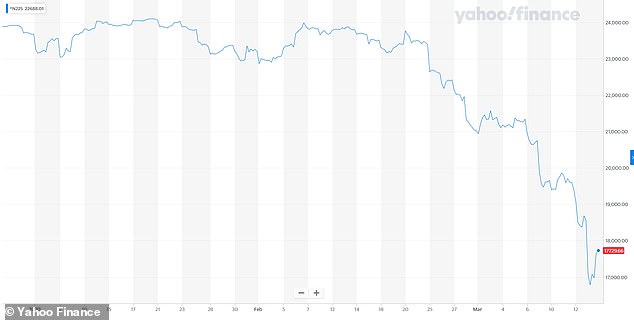 NIKKEI, LAST TWO MONTHS: The index has fallen sharply during the early months of 2020, with the coronavirus outbreak spreading around the world

‘The governor of the Reserve Bank made it very clear this morning the levers of fiscal policy need to do their job here,’ Prime minister Scott Morrison said.

‘We need to put budgets to work to keep people in work,’ said Morrison, whose federal government has already pledged 11.4 billion (£5.7 billion) in stimulus.

The market plunge has gathered pace after Trump imposed his travel ban and the European Central Bank disappointed markets by holding back on rate cuts.

‘Government bureaucracy simply has not kept pace with the nature of the outbreak and market expectations,’ said Tai Hui an Asia market strategist at J.P. Morgan.

‘We need to see the number of new infections stabilise…we also need to see fiscal and monetary policy support implementation,’ he said.

‘Hence, we are not looking at a specific time or valuation to advise investors to add back equities.’ 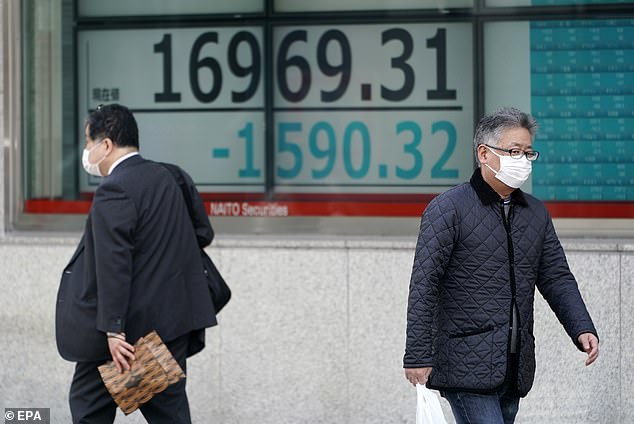 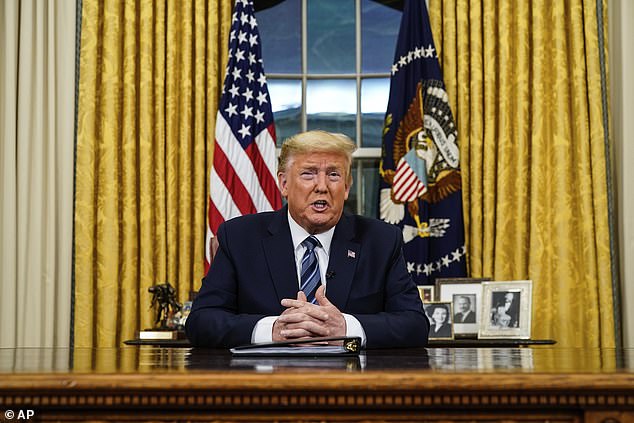 The sell-off on Wall Street helped to wipe out much of Wall Street’s gains which Trump has touted as evidence of economic success since he became president.

Stocks fell so fast on Wall Street at Thursday’s opening bell that they triggered an automatic, 15-minute trading halt for the second time this week.

The so-called circuit breakers were first adopted after the 1987 crash, and until this week hadn’t been tripped since 1997.

European markets fell 12% in one of their worst days ever, even after the European Central Bank pledged to buy more bonds and offer more help for the economy.

‘Between the lack of a strong US fiscal response and the latest travel ban for arrivals from Europe to the US, global markets appear to have been tipped over into a sell-everything mode,’ Jingyi Pan of IG said in a commentary.

Germany warns it will stop extradition of its citizens to UK after Brexit: FT