A triathlete has wept tears of joy after helping his quadriplegic best mate achieve his lifelong dream of completing an Ironman race.

Hundreds of spectators cheered as Kevin Fergusson, 59, pushed Sid James, 60, in his wheelchair across the finish line of the 15th Ironman Western Australia in Busselton on Sunday night. 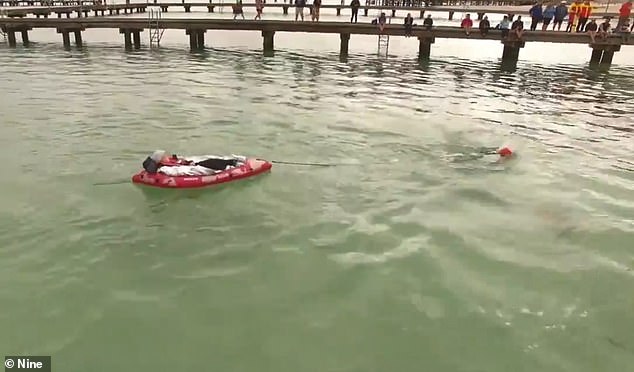 Triathlete Kevin Fergusson pulled Sid James along in an inflatable kayak during the 3.8km swim leg of the Ironman Western Australia in Busselton on Sunday

There were emotional scenes at the finish line as an exhausted but delighted Fergusson hugged James and wept as he placed a medal around his mate, who never thought his dream would one day become a reality.

The pair were later given a standing ovation by fellow competitors as they entered the recovery room.

James spent four years training to become an Ironman when he was younger. 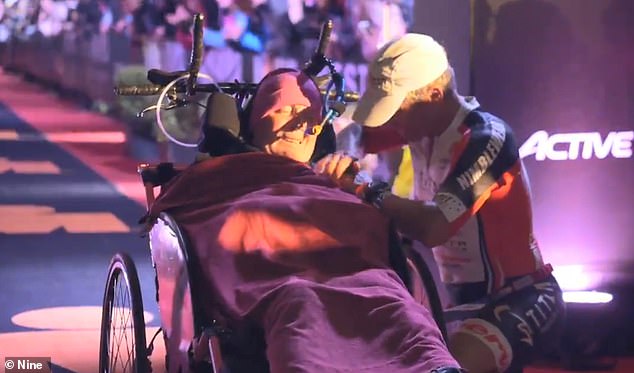 Those aspirations fell apart when he became a C3 quadriplegic 25 years ago after he was knocked from his bike during a training ride near his home at Victor Harbor, south of Adelaide.

His mate Fergusson has since become a legend of the sport and has completed 30 Ironman races and won five Ironman world championships.

‘It’s the most painful but rewarding Ironman I’ve ever done,’ Mr Fergusson told the Adelaide Advertiser.

‘We were 750th or something like that out of 1000 people so we were nowhere near last in the field that’s for sure.’ 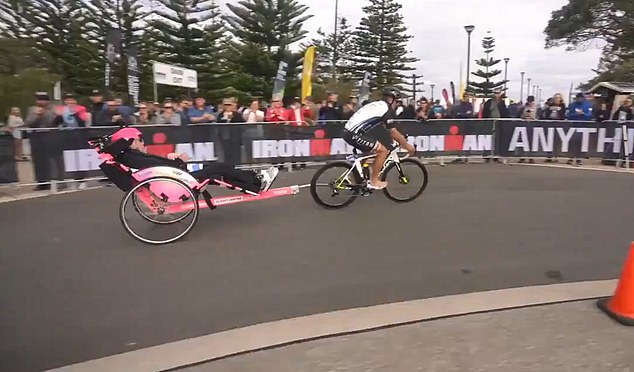 Mr James added: ‘Kevin is an idiot for taking this on, he really is, but he is a great idiot and I owe him so much.’

The friends trained for three years to make James’ dream a reality.

The pair had hoped to compete at the 2017 Ironman World Championships in Hawaii but had their registration cancelled by race organisers a week prior due to concerns regarding Mr James’ health.

Both admitted Sunday was a lot tougher than they had imagined.

‘We had a few chats along the way but at times, we both said to each other ‘what the hell are we doing, this is just stupid,’ Fergusson told 9 News.

James added: ‘I couldn’t believe how long and hard an Ironman is.’ 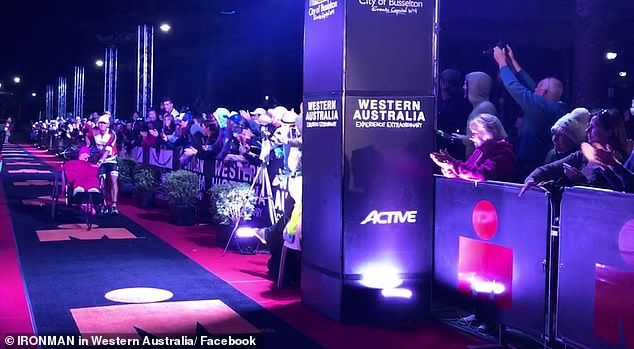 Footage of the inspirational pair crossing the finish line together has since gone viral on social media.

‘An truly inspirational display of Love and determination. So grateful to you both for doing your Ironman team journey together here in Busselton. You Rock,’ one woman posted.

Another added: ‘What an achievement for you both. All that hard work and sheer persistence came through for you both.’

One fellow competitor posted: ‘Superhuman! Such an honour to share the course with you. You are both amazing.’

Fergusson and James now hope to take on the Victor Harbour triathlon in March.