Australia has extended its suspension of the travel bubble with New Zealand for a further 72 hours after more community cases were reported.

The travel arrangements allowing people to travel from New Zealand to Australia without undertaking quarantine have been suspended until 2pm Sunday after two cases with the new highly-contagious strain of COVID-19 were detected in Auckland. The initial suspension period was due to end at 2pm AEDT on Thursday. 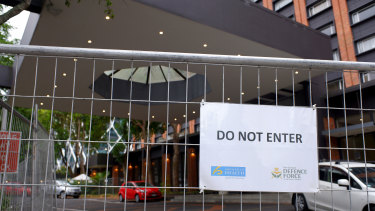 The Pullman Hotel in Auckland is the centre of the latest outbreak in New Zealand. Credit:Getty

“Twelve people who were in quarantine at the Pullman Hotel have arrived in Sydney, three have travelled on to Honk Kong and health authorities there have been notified,” Mr Kidd said.

“Two travelled onto Queensland, and authorities there have been notified.

“The others are all being followed up in NSW and are being tested.”

He said anyone who arrived from New Zealand since January 9 is now being asked to get tested and self-isolate until they receive a negative result, particular if they stayed at the Pullman Hotel.

There have been no new cases of community transmission of the virus in Australia for 11 days.

Mr Kidd also said the rollout of COVID-19 vaccinations is on track to commence in late February, with 80,000 doses of the Pfizer vaccine expected to be available every week.

Australia is also expecting to receive 1.2 million doses of the AstraZeneca vaccine in March “subject to approval by the Therapeutic Goods Administration and final shipping confirmation”, he said.

An agreement under which Australia will produce 50 million doses of the AstraZeneca vaccine onshore is expected to begin in late March and deliver one million doses every week.

“Because of our onshore manufacturing agreement … we have certainty of vaccine supply in a time of uncertainty,” Mr Kidd said.

“There will be daily, sometimes hourly, stories coming from around the world on vaccine rollout. Some of these will affect Australia, most will not.”

At the end of each day, we’ll send you the most important breaking news headlines, evening entertainment ideas and a long read to enjoy.  Sign up to The Sydney Morning Herald’s newsletter here, The Age’s here, Brisbane Times’ here, and WAtoday’s here.