Former Treasury secretary Ken Henry says the aged care system is horribly complex and underfunded and Baby Boomers will not tolerate it.

Dr Henry told an aged care inquiry on Wednesday the difficulties older people encountered when trying to navigate the system was an enduring source of discomfort to him since his decade running the Treasury until 2011. He toyed with using the word "unconscionable". 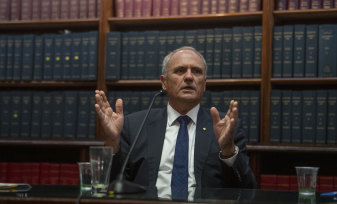 "The system overall is horribly complex and it contains a very high level of uncertainty for people," Dr Henry said. These were people who were elderly, vulnerable, probably suffering emotional distress, and possibly mentally impaired.

"Too many have little or inadequate family support, and they confront the aged care system knowing nothing about it, knowing that they have no real option but to throw themselves into the system because it's quite simply impossible for them to look after themselves. And they're bewildered," he said.

Successive intergenerational reports identified aged care as the fastest growing component of government expenditure. The fiscal burden was expected to increase as age expectancy increased, treatments advanced and the Baby Boomer bulge moved into aged care, Dr Henry said. Even a decade ago, he could see the system was unsustainable.

"It's underfunded, it's under-resourced and it will not be tolerated. It seemed to me that the Baby Boomers, which is a very politically powerful cohort, would not tolerate a continuance of this system," he said.

The Royal Commission into Aged Care Quality and Safety is investigating the funding, financing and prudential regulation of aged care during a five-day hearing in Sydney.

A rise in the number of people requiring aged care is expected to start taking effect from 2030 as Baby Boomers enter their 80s. The inquiry heard concerns have been increasing over the past decade, not just about the financial sustainability of the system, but whether it was providing an adequate level of care — two themes apparently in tension with one another.

University of NSW economist John Piggott suggested on Tuesday that a hypothecated levy — a dedicated tax for a specific expenditure — could be invested in a new aged care fund managed by the Future Fund system. Any surplus that accrued over the next decade could be used to pay for the demographic bulge.

Dr Henry said he supported the concept of this levy, but it should be run very lean and not calibrated to establish reserves for future expenditure.

It was too late for such a scheme, he said, because it was "intergenerationally unfair" to ask people not only to pay for the costs of their parents and grandparents in aged care, but also pre-fund their own aged care.

"I think it's enough that we ask of them that they, as workers, fund the aged care of their parents and grandparents. I think that's enough for society to expect of them," he said.

The beauty of a levy was that government would need a mandate to increase it, so it would have to constantly explain to the population the connection between the tax and the social benefit, Dr Henry said.

Earlier in the day, former federal treasurer and Future Fund chairman Peter Costello told the hearing the means-testing paperwork for aged care was so complicated that even he struggled to fill it in for his family members. 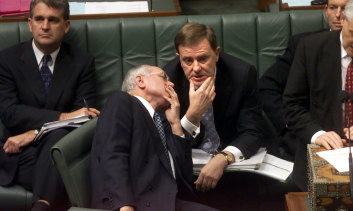 "I think there are over 100 questions and 27 pages and, you know, I think I'm reasonably financially literate," Mr Costello said. "I had a lot of trouble filling it in. I don't know how a person going into a nursing home would ever be able to fill it in."

Mr Costello, who is also the chairman of Nine Entertainment Corporation which owns this masthead, had been asked whether there was scope for the primary residence to be used for the purposes of contributing to aged care to a greater extent than it is now.

Apparently alluding to the former prime minister Paul Keating’s proposal for a HECS-style loan system, he said people could already use their homes as security on a bond, but this should be done "knowingly and in advance" and there should be products that allowed them to do so in their lifetimes.

"If you come around and try to take their assets after they've died, I think you can expect to run into a lot of opposition there," he said.

Our weekly newsletter will deliver expert analysis of the race to the White House from our US correspondent Matthew Knott. Sign up for the Herald‘s newsletter here, The Age‘s here, Brisbane Times‘ here and WAtoday‘s here.

Coronavirus news live – 46,574 dead and the places at risk of local lockdown