NSW has reported 1259 new local coronavirus cases on Wednesday, as Premier Gladys Berejiklian announced 80 per cent of people aged 16 and over in the state had now received their first dose of vaccine.

“We’re up to 47.5 per cent of our adult population completely vaccinated, and it’s that number we’re looking to, to allow us freedoms at 70 per cent double dose,” Ms Berejiklian said. 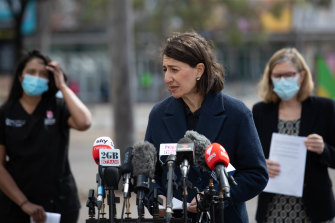 The 9pm to 5am curfew in place in 12 local government areas across Sydney’s west and south will lift tonight.

The Premier said the decision came on the advice of police and health authorities.

“This is a whole-of-government decision based on a number of factors, but I want to send this strong message: we can’t move on anything else just now, we need everybody to hold the line,” she added.

“Please make sure that if you live in those local government areas of concern that you stick to every other rule that’s in place.”

There were 12 new deaths reported on Wednesday. The cases, aged from their 30s to their 90s, all died in hospital.

“We extend our deepest condolences to the families of those loved ones,” the Premier said.

These doses are being administered eight weeks apart. Ms Pearce said this was due to the supply provided by the federal government.

Victoria reported 423 new local cases on Wednesday, only 149 of which are linked to known outbreaks, and two deaths. It is expected the state will announce its road map out of lockdown on Sunday.

Don't visit your GP if you think you have coronavirus

Islamic State's 'caliphate' on brink of defeat in Syria