A growing number of Black activists in Portland are openly distancing themselves from self-proclaimed “anarchists” whose violent and disruptive antics are distorting the former’s message of racial justice.

Portland drew worldwide attention over the summer as black-clad demonstrators clashed with police while rioting and looting in response to the police custody death of George Floyd in Minneapolis. 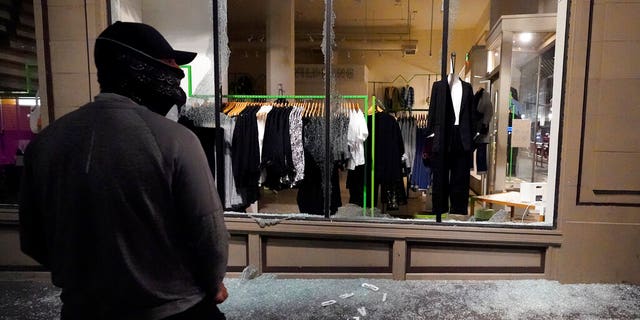 A man stands in front of a broken display window at a retail store during protests in Portland, Ore., Wednesday, Nov. 4, 2020, following Tuesday’s election.
(AP)

Although the intensity of the demonstrations has largely fizzled out with the presidential win of Joe Biden, disparate groups have not let up.

Mingus Mapps, a Black Portland resident and incoming city councilmember, said the actions of these anarchist groups do nothing to help the cause of racial justice.

“When people set fire to a building, it really does not liberate me one bit,” he recently told The Los Angeles Times. “It does the opposite. It fuels the political culture that makes racism possible.”

Shirley Jackson, a Portland State University professor of Black studies, said Black Lives Matter had clear demands, but the violent tactics of the anarchists made those demands less clear.

“With the BLM protests there were clear demands, but it’s very difficult to see an end to something when it’s not clear what the demands are,” Jackson told The Times.

Others have stressed how crucial it was to disassociate themselves from the anarchist protesters – who are, more often than not, entirely White.

Toya Fick, Oregon executive director of the nonprofit group, Stand For Children, said when anarchists smash windows, they’re doing so “because they were thinking about my life and the lives of my children.”

On Nov. 8, police arrested three men in their early 20s and 30s – all of them White – on criminal mischief charges after a group of anarchists dressed in black bloc attire marched to the county Democratic Party headquarters, shattered the windows and spray-painted “F— Biden,” among other profane messages.

The incident occurred hours after Gov. Kate Brown decided to not extend an order increasing law enforcement presence under the Unified Command, a partnership among the Portland Police Bureau, Multnomah County Sheriff’s Office, and the Oregon State Police, to respond to election-related unrest.

The following day, Rachelle Dixon, who runs Portland’s BLM chapter, reached out to the media to draw a sharp line between her organization and the anarchists. She lamented the fact that in the public’s perception, violent anarchist protesters have “melded with Black Lives Matter, but they’re 90% and they don’t reach out to Black organizations.”

Teenager begs for help after miniature pinscher was mauled to death