A man has been charged and had his licence suspended after he allegedly drove through a red light and crashed into a bus in Sydney’s west, fatally injuring his female passenger.

Police were called to Argyle Street in Parramatta, near the intersection of O’Connell Street, just after 8am on Saturday where they found a grey BMW sedan and a bus had collided. 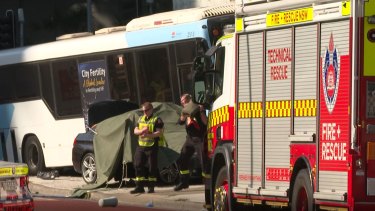 The scene where a woman died after a car and bus crashed in Parramatta.Credit:TNV

The front-seat passenger in the BMW, a 46-year-old woman, was trapped in the wreckage and died at the scene. There were no passengers in the bus at the time.

Vision from the scene showed the bus and car had veered onto the footpath, with the passenger side of the car closest to the bus.

The 54-year-old BMW driver and the 66-year-old man driving the bus were taken to hospital for mandatory testing and to be treated for minor injuries.

“The man had his driver’s licence suspended and he was given conditional bail to appear at Parramatta Local Court on Wednesday 9 June 2021,” police said in a statement.

“Police are appealing for anyone who witnessed the crash, or who has dashcam vision, to contact Parramatta police via Crime Stoppers on 1800 333 000.”

NFL draft: Biggest draft day surprise might have been Darius Rucker being at Trevor Lawrence's party

Pensioner, 72, choked to death on Christmas Day dinner in front of horrified family – The Sun