Boris Johnson was today forced to scrap plans to bang the drum for ‘Global Britain’ on a post-Brexit trip to India.

The Prime Minister cancelled plans for a visit to New Delhi later this month after introducing a third lockdown in England that will run until at least the middle of February.

He had accepted an invitation to meet Indian prime minister Narendra Modi as his first major trip after Britain completely left the EU, as a signal of intent to boost the UK’s wider ties around the world.

But today Mr Johnson informed Mr Modi in a call from Downing Street that the trip would not be possible.

A Downing Street spokeswoman said: ‘[He] spoke to prime minister Modi this morning, to express his regret that he will be unable to visit India later this month as planned.

‘In light of the national lockdown announced last night, and the speed at which the new coronavirus variant is spreading, the Prime Minister said that it was important for him to remain in the UK so he can focus on the domestic response to the virus.’ 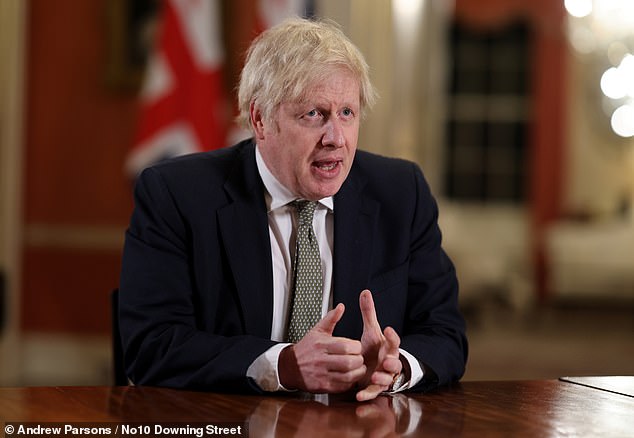 The Prime Minister cancelled plans for a visit to New Delhi later this month after introducing a third lockdown in England.

However, Mr Johnson also held out the hope that they would be able to meet in the first half of this year ahead of a planned G7 suummit in Britain.

India is seen as a key strategic partner for the UK as it looks to forge a new path after cutting ties with Brussels.

Mr Johnson would have been the first PM since John Major to attend its annual Republic Day event as Guest of Honour.

It would also have been his first major bilateral visit since entering No10 in July 2019 – although much of that time has been dominated by the coronavirus pandemic.

Announcing the visit in December, Downing Street said Mr Johnson would use the trip to boost cooperation in trade and investment, defence and security, and health and climate change.

The UK-India trade relationship is worth around £24billion a year, and is said to support around half a million jobs.

There are 842 Indian companies in the UK with a combined turnover of £41.2billion.