Normal life could resume ‘by CHRISTMAS’: Boris Johnson reveals ‘work from home’ advice will END from August and football stadiums and gigs can reopen in October – but warns councils will have NEW ‘lightning lockdown’ powers if COVID spikes

Boris Johnson today announced he is aiming for life in the UK to return to something close to normal by Christmas as he said workers will be encouraged to stop working from home from August.

The Prime Minister today used a Downing Street press conference to set out his timetable for the further easing of lockdown measures.

He said restrictions on the use of public transport in England are being dropped from today with trips on the train and bus to no longer be viewed as the option of last resort.

He said the Government will publish new guidance applying from August on the crunch issue of working from home in the hope that more employees will physically return to their desks to give the economy a much needed boost.

Meanwhile, the Prime Minister said the Government is targeting the reopening of stadiums in the autumn with audiences potentially returning to football matches and outdoor gigs in October.

Crucially, the PM also said the Government is hoping to review all the remaining ‘outstanding restrictions’ in the coming months in order to allow a ‘more significant return to normality from November’ and ‘possibly in time for Christmas’. 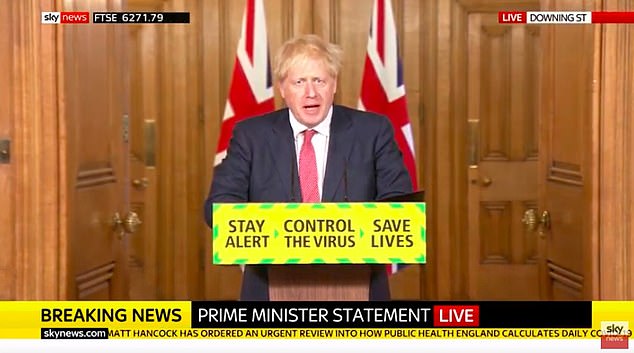 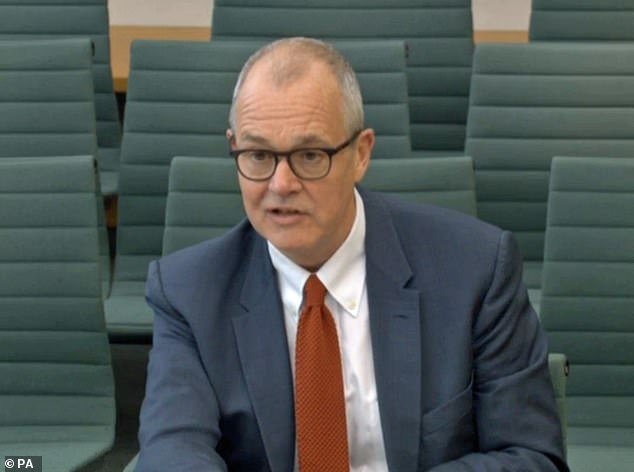 Whitehall sources said overnight that the official guidance on working from home would be ‘tidied up’ to reflect the PM’s back-to-work message, suggesting the shift in approach would be more nuanced than previously thought.

Mr Johnson was due to set out an ‘aspirational’ timetable for lifting social distancing measures, but also warn it is likely to be nine months before we can return to a more normal life.

New powers for councils to impose ‘lightning lockdowns’, an extra £3 billion funding for the NHS and a pledge to increase coronavirus testing capacity to 500,000 a day by the end of October were also due to be announced by the PM.

Sir Patrick told the Science and Technology Select Committee yesterday afternoon that the UK is ‘still at a time when distancing measures are important’ and that working remotely ‘remains a perfectly good option’.

He then went even further as he said many companies had found working from home had not been ‘detrimental to productivity’ and as a result there is no need to move away from the policy.

He said: ‘My view on this, and I think this is a view shared by SAGE, is that we are still at a time when distancing measures are important and of the various distancing measures working from home for many companies remains a perfectly good option because it is easy to do.

‘I think a number of companies think it is actually not detrimental to productivity and in that situation absolutely no reason I can see to change it.’

His comments appeared to strike a hammer blow to Mr Johnson’s hopes of persuading many more people to physically return to their places of work.

The Government is increasingly concerned that continued working from home will hold back the nation’s economic recovery.

Sir Iain Duncan Smith, the former Tory leader, had urged the PM to overrule Sir Patrick for the sake of the economy.

He said: ‘The scientists have got it completely wrong from start to finish. Most of them have never run a business and it is not for them to tell employers how best to manage their staff.

‘There is a desperate need to get people back to work, back into their offices – otherwise our town and city centres will die.’

It had been reported that Mr Johnson would formally drop the existing official guidance to ‘work from home if you can’.

However, he was expected to stop short of ordering workers to return. Instead new guidance will tell employers to work with their staff on managing a gradual return to the workplace where possible.

The Prime Minister today acknowledged the threat of a second wave of coronavirus this winter.

Sources had said he was determined to avoid the fate of several US states which are seeing cases of the virus soar after easing restrictions too fast.

The premier is hoping an extra £3 billion of funding will ensure the health service is ready for a potential spike in infections.

It comes after a report commissioned by Sir Patrick warned there could be 120,000 hospital deaths in a ‘reasonable worst-case scenario’ this winter.

A Downing Street spokesman said: ‘Thanks to the hard work and sacrifices of the British people, the virus is under control and we have eased restrictions in a cautious, phased way.

‘But the Prime Minister is clear that now is not the time for complacency, and we must make sure our NHS is battle ready for winter.

‘Tomorrow, he will set out a broad package of measures to protect against both a possible second wave, and to ease winter pressures and keep the public safe.’

The spokesman said the immediate funding for England was new and not previously allocated, while expenditure will be set out for the devolved nations in due course.

Mr Johnson today published an additional chapter to the Government’s ‘road map’ for recovery from the crisis.

Earlier this week Mr Johnson was warned in the report by the Academy of Medical Sciences that action must be taken now to mitigate the potential for a second peak, including scaling up the Test and Trace system.

The research said capacity for 350,000 tests per day will be needed to test individuals as they show symptoms of either Covid-19 or flu.

The latest Government figures say capacity stood at nearly 338,000, but Mr Johnson has now committed to increase this to half a million by the end of October to bolster Test and Trace.

Councils will be handed powers to enable them to shut down pubs and cafes at short notice and without having to ask the government’s permission to better equip them to stop localised outbreaks.

The powers could even extend to the ability to ban weddings at short notice if there is a local spike in infections.

A Government source told The Sun: ‘Councils will be able to impose lighting lockdowns where they see fit.’