Johannesburg: The plight of the African elephant is well known, declining from around 12 million animals to 400,000 in just a century. Yet, in a handful of countries, the opposite problem – overpopulation, made worse by drought and a lack of tourist money – is pushing governments to relocate their tusked giants.

Botswana, a relative safe haven with the largest elephant population in Africa, says it will encourage thousands of its elephant families, many of them refugees from decades of warfare, to trek north to their ancestral homelands in Angola. Tens of thousands of elephants fled south during more than 40 years of conflict and now Botswana wants them to go home. An agreement is in place to remove fences and clear landmines in the hope that the elephants will migrate of their own accord. 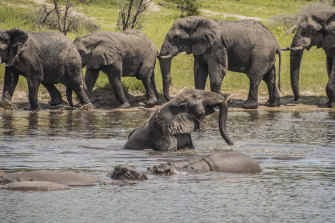 African elephants socialise along the Boteti River in Botswana, where numbers have swelled in recent years.Credit:AP

Mike Chase, from Elephants without Borders, said Botswana's elephant population had become too large and there were conflicts with local farmers and regular food and water shortages.

He said a way to ease this would be to "create safe corridors for elephants to move through, to repopulate and recolonise southeast Angola where there are not so many elephants".

Wildlife suffered during decades of anti-colonial and civil wars in Angola.

Fred Bridgland, a British author who covered Angola's crisis years, said that the opposition Unita party had, during the civil war, been involved in poaching. "Unita, encouraged by rogue elements in the South African Defence Force at that time, and by Portuguese and Lebanese 'mafias', slaughtered so many elephants and rhinos… Only now is the rich wildlife of that region beginning to recover."

In neighbouring Namibia, the ministry of environment, forestry and tourism ran an advertisement last week offering 170 "high value" wild elephants for sale, blaming lack of space and drought. Namibia's elephant population had dwindled to about 5000 in 1990, but by 2019 it had increased to around 24,000.