A major bravery medal given to a special forces soldier and celebrated by the Australian War Memorial may be stripped after the war crimes inquiry headed by Justice Paul Brereton found elements of the battle in which it was earned were “wilfully misreported” by a small SAS patrol.

The award is the only decoration singled out by the Brereton Inquiry’s redacted report, which on Thursday was published and which accuses more than two dozen special forces soldiers of alleged involvement in the murders of 39 Afghan prisoners and non-combatants. Some have been referred for criminal prosecution, and medals and other awards may be stripped from them. 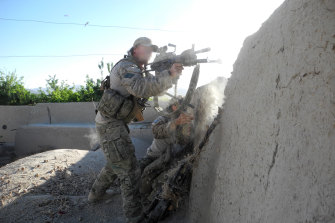 A special forces soldier engages the Taliban in 2011.Credit:ADF

The Age and The Sydney Morning Herald has identified the date and location of the incident singled out, but cannot reveal the identity of the soldier because of a non-publication orderissued by Justice Brereton.

The report reveals that some, though not all, members of the small SAS patrol team involved in the battle which led to the gallantry award “wilfully misreported” an engagement with a purportedly “armed insurgent” when describing why an Afghan man was shot dead. Defence sources have confirmed that the on-the-ground reporting of the incident included a false account, relayed via radio back to a patrol base, that the dead man was patrolling with an AK-47 rifle. He carried no rifle.

Justice Brereton said that while it was still possible the Afghan man shot dead was an anti-coalition militia “spotter” trying to identify the location of western soldiers and therefore that his death was not a war crime, the deliberate embellishment “infected” a later recommendation that a soldier should be decorated for bravery. This misreporting, Justice Brereton said, led to a “false assumption that the anti‐coalition militia engaged was armed”.

The tainting of some awards will be a bitter pill for many SAS soldiers whose honours could become collateral damage, even if they were earned faithfully. Several of the SAS whistleblowers who have been praised for their courage in calling out bad conduct are highly decorated. 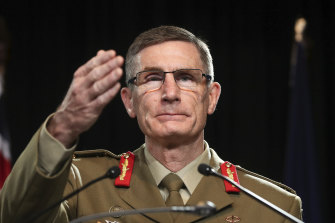 On Thursday, the Chief of the Defence Force Angus Campbell announced some would lose unit citations as a result of the Brereton inquiry, even though these whistleblowers exposed rather than participated in alleged executions of prisoners and civilians.

The devastating findings continue to reverberate across Australia, the defence force and in Canberra.

Former prime minister John Howard said those charged with war crimes deserved the presumption of innocence, but said he felt distressed by the "chilling" revelations. Mr Howard, who committed Australian forces to Afghanistan in 2001, said he remained "intensely proud of the bravery and professionalism of those forces in the years that followed".

"None of this diminishes the distress that I and so many others feel about the contents of the Brereton inquiry [report],” he said.

Defence Minister Linda Reynolds, who served for 29 years in the Australian Army as a Reserve officer, said on Friday the report made her "physically ill" when she read it two weeks ago.

Former air chief marshal Sir Angus Houston, who was chief of the Defence Force between 2005 and 2011 and oversaw three deployments to Afghanistan, said he was “shocked and deeply disappointed”.

“Those involved in the 23 reported incidents, where there is credible information of unlawful killing, should be held to account,” he said, referring to the ongoing police investigations and possible prosecutions of soldiers.

Mr Houston said he was unaware of the incidents that led to Justice Brereton’s findings of improper conduct and which occurred during his stint as defence chief. His disavowing of knowledge of suspected war crimes is backed by the Brereton report, which found the officer chain of command was kept in the dark by senior soldiers accused of murdering prisoners.

“I was not aware of their alleged detail at the time and I have not been briefed on the detail since. Regrettably the alleged atrocities of a few have besmirched the reputation of the Australian Defence Force, particularly the thousands who served in Afghanistan.”

Retired Australian Army major general Gus McLachlan, who in 2013 conducted a 12-month tour of Afghanistan as senior campaign planner for US General Joe Dunford, described his “shame and anger about the behaviour of members of an institution I was proud to be part of for more than half my life”.

“I will never get past the revelation that the majority of the alleged murders were of prisoners. This was not heat-of-battle stuff. Our Army will carry this shame as a stain on its history.”

Mr McLachlan said the SAS whistleblowers were the heroes of the scandal, as well as Major General Jeff Sengelman and defence consultant Dr Samantha Crompvoets, whose reports in 2016 sparked the Brereton inquiry.

“I salute the soldiers who had the courage to come forward and tell their stories. I salute my mate Jeff Sengelman and offer him a heartfelt apology for not understanding the load he was carrying as he dug into the entrenched secrecy when I was his peer leader in the conventional Army. And finally I salute Dr Sam Crompvoets who didn't ask to be immersed in this terrible story but had the courage and integrity to insist that the threads of information she was hearing pointed to a deeper problem."

Mr McLachlan also said the scandal could not be put down to “the behaviour of a few bad apples. The culture and leadership of the unit and command failed.”

Australian Defence Association executive director Neil James said officers higher up the command chain may have been morally responsible for the failures, but the report was “very persuasive on how they were able to fool the chain of command”.

“The problem is the public perception will be: ‘How come only the patrol commander level is being fingered?’” Mr James said.

Mr James warned Australia’s allies, particularly the United States, may have to face similar inquiries in the years ahead.

“We are ahead of the wheel, we are further down the track and I expect other countries are going to have to go,” he said.

“We would have been in worse trouble if we tried to cover it up and it came out in 10 or 20 years. The accountability process worked but it worked way too slow, but it would be even worse if it came out further down the track.”