Builder, 51, who died after falling from a 10ft ladder was actually killed by coronavirus, doctors say

A builder who died after falling from a 10ft ladder was actually killed by Covid-19, scientists have claimed.

The man, who has not been named, suffered lacerations to his forehead and bruises to his face, elbow and left hand after he fell into the yard of an under construction family home.

Medics were called and rushed to the building site, in Croatia, and desperately tried to revive him, but he was declared dead at the scene.

A test for coronavirus was then carried out, as required by local medical guidelines, and came back positive.

The life-threatening condition, which normally results in hospitalisation, is triggered when vital organs do not get enough oxygen.

Academics at the University of Zagreb said the Covid-induced illness had caused his fall, which they argued meant the death must be recorded as a Covid-19 fatality under World Health Organization (WHO) guidelines.

The scientists said the evidence ‘unequivocally’ led to Covid-19 being to blame for the death —  but they did not specify how.

Experts today suggested the man may have lost his balance while climbing the rungs, leading to the fall, which would make Covid-19 to blame. They added that going up a ladder while suffering from ARDS was the ‘last place I would want to be’. 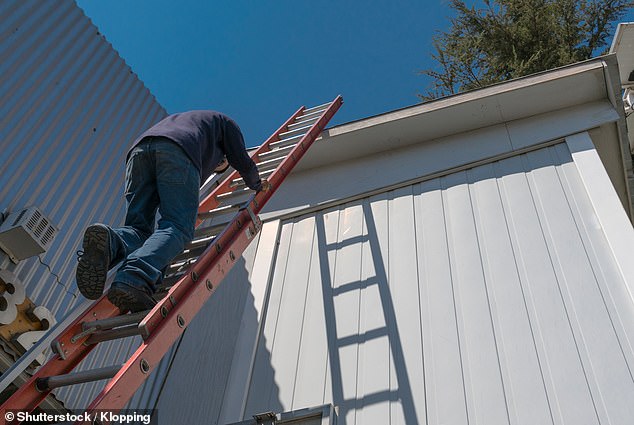 The builder, 51, tested positive for the virus after his death. Scientists said that he had been suffering from acute respiratory distress syndrome (ARDS), triggered by the virus, which they said had caused him to fall from the ladder. (Stock)

Acute Respiratory Syndrome, or ARDs, is where the lungs cannot provide the body’s vital organs with enough oxygen.

The condition is life-threatening, and most people who develop it end up in intensive care units. Many are already in hospital when this happens.

It is triggered when the lungs become severely inflamed from an infection, such as Covid-19, or injury. This causes fluid from nearby blood vessels to leak into the lung’s air sacs, stopping the body from absorbing enough oxygen.

Due to the drop in oxygen availability, the vital organs start to respire anaerobically – without oxygen – in order to create enough energy to keep working.

But this causes lactic acid to build-up which, when in high concentrations, can trigger a cardiac arrest or organ failure.

What are the symptoms of ARDS?

The doctors said they were initially suspicious a fight had occurred between the man and his co-workers, who had lived together for ten days, because no one saw the man fall from the ladder.

But after an autopsy revealed severe damage to the lungs, they said they could rule this out.

The man had suffered from a headache, fatigue, fever, cough, chest discomfort and shortness of breath in the week before his death, his co-workers said.

They had asked him to go to a doctor, but he had refused their advice.

The man also had type 2 diabetes and was a smoker, which both raised his risk of death from Covid-19.

The decision to attribute the death to coronavirus was presented in a study in the Journal of Forensic Pathology by pathologists led by Velibor Puzovic from Dubrovnik General Hospital.

The WHO defines a death from Covid as one ‘resulting from a clinically compatible illness, in a probable or confirmed Covid-19 case’.

But the organisation also says deaths where there is a ‘clear alternative cause’ should not be attributed to the virus.

MailOnline has contacted the WHO for comment on whether the death was recorded correctly but has yet to hear back.

Professor Paul Hunter, an expert in medicine at the University of East Anglia, said he would have attributed the fatality to coronavirus if he was signing the death certificate.

‘So at first sight he probably may not fit the criteria (for a Covid-19 death),’ he told MailOnline.

‘But why did he fall from the ladder? Was it a heart attack caused by Covid-19 (these do occur) or was he ill and shaky from his acute respiratory distress syndrome (ARDS) and that led to his fall?

‘If I had ARDS, the top of a ladder is not where I would want to be.

‘Looking at the post-mortem report the severity of the lung and other changes due to Covid-19 would be enough to lead to death and they do say that the fall injuries were probably not life threatening in themselves.

‘And although he was only 51 he had a lot of pre-existing medical conditions. So high risk of death from Covid-19.’

There are significant concerns that the number of Covid-19 deaths may have been over-inflated worldwide by miscounting.

Croatia has recorded 1,113 deaths from the virus since the pandemic began, and a total of more than 87,400 cases.

The country’s health minister Vili Beros ruled out a further lockdown last week, but said he would impose tighter restrictions if cases continued to rise.

‘Another lockdown or curfew is out of the question,’ he said.

Residents are currently required to wear face masks in taxis, shops and on public transport.