Business leaders have called for clarity on the triggers for and nature of any future lockdowns, citing concerns about the damage to people’s livelihoods and fraying relations with the Victorian government.

Buoyed by the first day in more than a week without a locally acquired case of coronavirus, the state government declared an end to its five-day lockdown from 11.59pm on Wednesday, but chose to retain strict rules on household gatherings and mask-wearing until at least February 26. 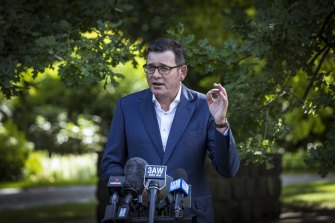 Announcing the end to lockdown yesterday, Daniel Andrews did not rule out another one.Credit:Chris Hopkins

The Victorian Property Council’s executive director, Danni Hunter, and Victorian Chamber of Commerce  chief executive Paul Guerra warned the requirement to wear a mask indoors would stymie a meaningful recovery for city-based businesses relying on a surge in demand from office workers.

Australian Retailers Association chief executive Paul Zahra said the lockdown left a “bad taste” with his members in Victoria, who he said had endured longer shutdowns in 2020 than retailers in any other state.

“We can’t continue to run businesses like a light switch, turning off and then on again, so this needs to be sorted out,” Mr Zahra said. “So we’re advocating strongly for a national framework that would at least be consistent.”

Mr Guerra said while there was relief, businesses needed confidence and certainty to rebuild without “a brick wall put in front of their face ever again”. 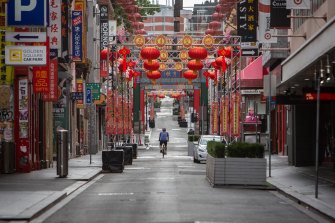 Almost 40,000 Victorians were tested on Tuesday, 5000 more than on any other day during the pandemic. Health chiefs said the strong testing numbers fuelled confidence the virus had not spread widely in the community, as was feared when the lockdown was announced last Friday as the highly infectious British variant of COVID-19 spread to more people connected with the Holiday Inn outbreak.

The cluster, which has grown to 19 confirmed cases, prompted more than 130,000 people to get tested in the past five days, a figure hailed as phenomenal by COVID-19 response commander Jeroen Weimar. The government tripled laboratory capacity in response.

Crowds will be permitted to return to the Australian Open on Thursday. It is unclear how many people will be allowed into Melbourne Park, where 25,000 spectators a day were scheduled to attend in the final rounds. 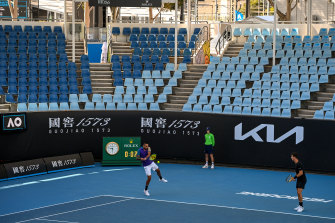 Fans will be allowed back at Melbourne Park.Credit:Eddie Jim

Schools, restaurants and the retail sector can reopen and weddings are once again permitted. Density limits for businesses and events will revert to pre-lockdown settings. Masks will be mandatory indoors when away from home and outdoors only when physical distancing cannot be maintained.

Announcing the lockdown’s end, Premier Daniel Andrews said: “Five days, as challenging as it [was], is infinitely better than taking a chance and then finishing up with a five-week lockdown or something much, much worse.

“We say we didn’t want to have it more than five days and that is what has worked. That is what has meant we have got zero cases today after the biggest testing day we have ever had in the last 12 months.

“That isn’t to diminish the pain out there and it isn’t our intention to do this again. We would only ever do it again if the advice was that so much more was at risk than the price you would pay for a short and sharp circuit breaker lockdown.” 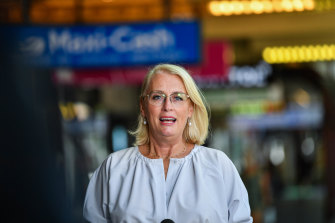 The state Liberal opposition is urging the government to immediately distribute financial support to businesses hurt by the closure. Melbourne lord mayor Sally Capp, while urging people to return to the CBD, urged the federal government to extend financial support beyond the scheduled end to JobKeeper support payments on March 31.

Mr Andrews said it was too early to talk about his government’s plans for business support on Wednesday but flagged a future announcement.

“They’re not happy at all,” he said. “The uncertainty has been increased and the feeling is that [Mr Andrews] doesn’t consult, that he makes it up without talking to people who know and that his care factor for small business is zero, that he does not care about small business.

“The consultations with the Victorian government are like lectures. You go onto a call and there are about 50 or 60 people on the call, and they lecture you and then they get off the call.”

Public health officials and the Premier cited fear of the spread of the British variant of COVID-19 as a reason for the lockdown, suspension of international flights to Melbourne and its decision to move quarantine facilities out of hotels and into regional locations.

Since the outbreak began, more than 90 per cent of close contacts have been contacted within 48 hours on all but one day. On Tuesday last week, 43.7 per cent were not contacted within the target time range, but this week the daily figure has been above 95 per cent on average.

There are about 3500 Victorians in isolation because of their connection with exposure sites or infected people.

But on Wednesday Chief Health Officer Brett Sutton said the contact tracing approach that had served Victoria in recent outbreaks “can deal with variants of concern if you go broadly [and] go really rapidly”.

“It reinforces that the three-ring principle of protection is the right way to go and it can deal with variants of concern as well,” he said. “There are circumstances where you need to pull out other tools, a short, sharp lockdown or a circuit-breaker, but [isolating] contacts of contacts in addition to the primary close contact … can bring all of that risk under control.”

Professor Sutton said there was no way of predicting whether the spread of cases would have accelerated had there been no lockdown. He said authorities needed to weigh up the risk that there were undetected cases in the community that were not easily traced back to the Holiday Inn.

“The great dilemma of public health and our great frustration is that when something doesn’t happen, you get the accusation that you have done something that wasn’t necessary,” he said. “We don’t know what might have happened in an alternative universe without all of the things we have put into play here.”

The Health Department was on Wednesday investigating the case of a man who returned a weak positive test when he arrived at hospital from the Twin Parks aged care home in Reservoir. The man had COVID-19 in August and authorities believe it is a case of “persistent shedding”. He has no links to the Holiday Inn and the test result it not being tallied as a positive case.

Hassan Vally, associate professor in epidemiology at La Trobe University, agreed the lockdown was the right call based on the evidence available to the government on Friday.

He said the quick spread in households of Holiday Inn workers, the case at the Brunetti cafe worker and transmission at a family gathering in Coburg – which was not picked up by authorities until days after the event – meant the number of exposure sites and close contacts were spiralling and authorities’ control over the outbreak was dwindling.

“They had to weigh up potential risk against cost and I’m very comfortable with the decision they made.”

Deakin University chair of epidemiology Catherine Bennett said the fact the outbreak did not spiral out of control did not prove that the lockdown had worked. She said almost all close contacts were isolated before the lockdown began at midnight on Friday and subsequent cases were already in isolation, meaning the people who needed to be confined to their home were doing so regardless of the lockdown.

“The great news is, contact tracing was up to it and the safety net [of the statewide lockdown] didn’t come into play because nothing went through to the keeper,” she said.

Professor Bennett was not critical of the decision to impose stay-at-home measures and said the situation could have been grave if one of the people infected last week sparked a super-spreader event. She said a very cautious third-ring isolation approach – where exposure sites are listed as tier one exposure sites and attendees are asked to isolate – proved sufficient.

“This outbreak never breached the second ring,” she said.

“We can’t say the circuit breaker was a success … [but] we can say we put it in place for the right reasons.

“We can’t use this to say we should put it in place every time. It was an unnecessary safety precaution, but this could have played out very differently.“

The building industry, which was largely exempt from industry-wide shutdowns in 2020, was among those still reeling from the effect of the snap lockdown.

Housing Industry Association Victorian executive director Fiona Nield said the lockdown had caused the building industry deep financial pain because of the time it took to close and secure work sites. She said she hoped the industry would be allowed to remain operational in future lockdowns.

Angela Gaedke, acting chief executive of the Victorian division of the Urban Development Institute of Australia, said the building industry should not have been shut down when construction sites had proven they could operate safely throughout the 2020 lockdowns.

“We need a plan to ensure businesses are not at risk of being turned on and off sporadically, which is not sustainable for businesses,” she said.

Key Victorian upper house MP Fiona Patten confirmed she would vote against the government’s bid to extend state of emergency powers until December. Ms Patten and the opposition have urged the government to draft separate legislation to give itself the power to enforce measures such as mandatory quarantine instead of continually declaring states of emergency.

The Property Council’s Ms Hunter said the government’s retention of the mask rule would continue to affect CBD businesses by acting as a “natural handbrake on the full return to offices”.

“Whilst masks are required in offices, we don’t expect to see 50 per cent back,” he said. “We’ll start working with the government next week about removing those masks to try and get 50 per cent [of workers into the office] and then get back to 75 per cent, which we were promised just three weeks ago.”

Ballarat mayor Daniel Moloney said some businesses in his area, particularly those in manufacturing, had initially struggled to determine whether they were allowed to continue operating under the restrictions.

Cr Moloney said regional communities accepted the lockdown, but he urged the state government to consider the major differences in conditions between regional Victoria and Melbourne if restrictions were applied in the future, including rules on returning to work.

“To apply a CBD Melbourne rule to CBD Ballarat doesn’t make a whole lot of sense. Most of our CBD workplaces have five to 20 people,” he said. “They’re significantly smaller workplaces.”

With Rachel Eddie and Ben Preiss

Thousands of Brits 'are waiting on delayed coronavirus test results'