Can YOU make sense of this e-gate notice? Queue chaos rolls onto TWELFTH day at Heathrow as despairing passenger shares baffling signs telling arrivals to ‘play the piano’ at automatic barriers

Can YOU work out what the instructions mean?

Passports are accepted only:

1. Locate the plastic photograph page, keeping it with accompanying COVER.

2. Hold THE PASSPORT, THE ABOVE PART first, into the scanner machine, all the way in.

3 If wished to amplify the microchip ”play the piano” on the cover, keeping in.

If technique of by-hand presentation is at fault, two extra attempts to scan are given.

Queuing chaos at Heathrow continued for a twelfth day today – as an image emerged of a bizarre sign instructing passengers to ‘play the piano’ as part of an incomprehensible step-by-step guide to using e-gates.

Travellers shared wearily-familiar pictures of snaking lines of passengers at immigration this morning, with the airport blaming the delays on Border Force carrying out ‘additional spot checks’ on Covid documents.

MPs and travel industry leaders have called on Priti Patel, Transport Secretary Grant Shapps and Border Force chief Paul Lincoln to take urgent action to fix the embarrassing scenes, but the Home Office has continued to insist people must be prepared to wait.

Holidaymakers hoping officials are getting a handle on the crisis will not be reassured by a surreal sign that was spotted at Heathrow this morning.

Passenger Sophie Tholstrup tweeted: ‘English is my first (and – if I’m totally honest – only) language and I do not understand one single word of these instructions for Heathrow’s automatic passport control. Good luck, weary visitors! #playthepiano.’

The sign began by stating ‘passports are accepted only’ and then went into a numbered list of instructions.

‘1. Locate the plastic photograph page, keeping it with accompanying COVER.

‘2. Hold THE PASSPORT, THE ABOVE PART first, into the scanner machine, all the way in.

‘3 If wished to amplify the microchip ”play the piano” on the cover, keeping in.’

The sign ended with the puzzling instruction: ‘If technique of by-hand presentation is at fault, two extra attempts to scan are given.’ 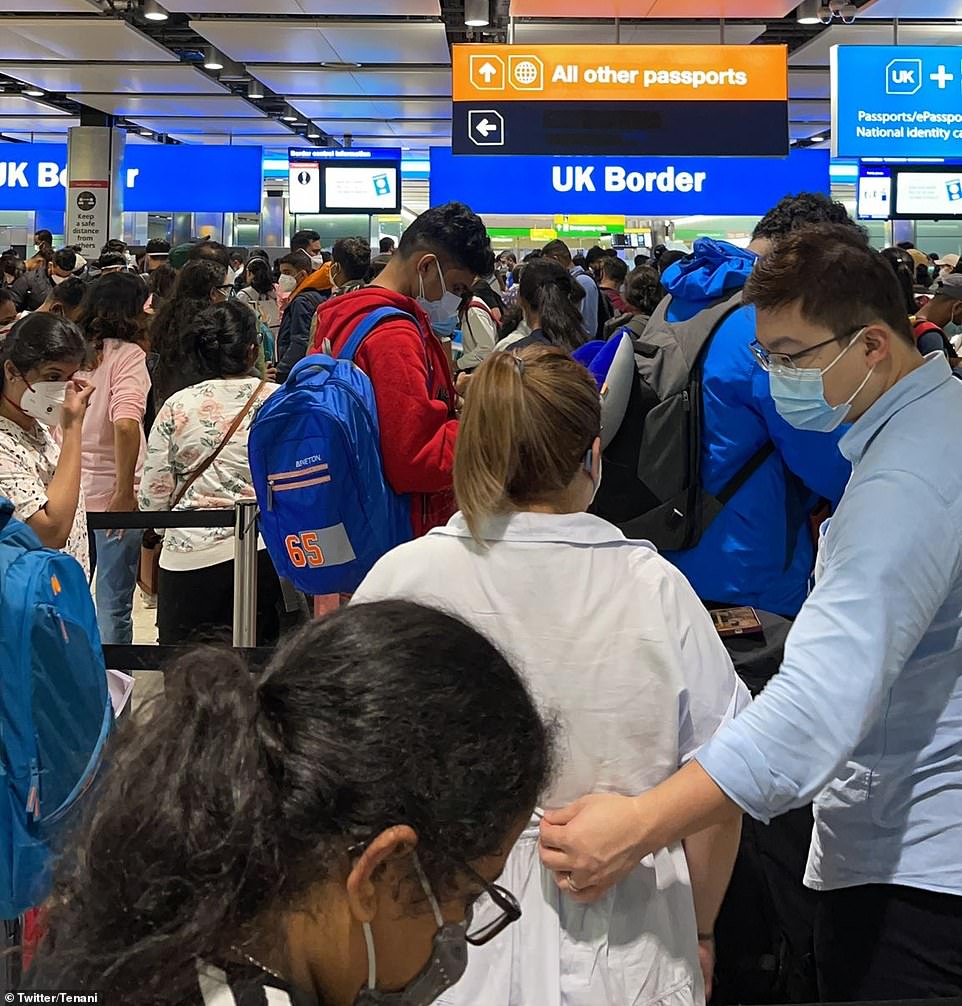 Travellers shared wearily-familiar pictures of snaking lines of passengers at immigration this morning, with the airport blaming the delays on Border Force carrying out ‘additional spot checks’ on Covid documents

Travel industry figures have warned the scenes of snaking queues are blighting the UK’s global reputation while running the risk of a spike in Covid cases – further jeopardising the already crisis-hit tourism sector and stifling business with post-Brexit Britain.

It came as Transport Secretary Grant Shapps appeared to confirm that the traffic light system for travel could be scrapped or at least simplified.

He also suggested that ministers will look to ‘reduce’ the number of tests double-jabbed travellers must take when travelling abroad.

It comes amid fresh calls for the government to allow double-vaccinated people to travel without having to undergo tests. Former transport secretary Lord McLoughlin told the Telegraph: ‘I’d like to know why they don’t think it is a runner when there is going to be a vaccine passport system in the UK later on this year.’

Traffic light system could be scrapped: Government ‘is set to end green and amber lists and focus instead on whether holidaymakers are double-jabbed’

The government could scrap the traffic light system and replace it with a simplified approach that focuses on whether travellers are double jabbed in a bid to encourage more people to get vaccinated.

Ranking countries green or amber could end, although the red category is expected to stay for high-risk destinations for which 11 days of hotel quarantine is required.

Rules for fully vaccinated holidaymakers, who do not have to self-isolate after returning from green or amber countries, would likely remain the same.

Currently, they have to take two tests – one within 72 hours of travelling back to the UK and a second within two days of arriving home. The latter must be a PCR.

Non-vaccinated people currently enjoy the same rules as the double-jabbed when returning from green countries, but have to self-isolate at home for up to 10 days after coming back from amber destinations.

The quarantine or testing requirements non-vaccinated people will have to undergo under the new system are still unclear, but they are likely to be stricter than what they currently faced.

Transport Secretary Grant Shapps appeared to confirm the reports as he also suggested that ministers will look to ‘reduce’ the number of tests double-jabbed travellers must take when travelling abroad.

In some cases it would have meant travellers being denied boarding, leaving them out of pocket for the entire cost of their flight or holiday.

In seven of 15 telephone calls that consumer champion Which? made to agents for British Airways, easyJet, Jet2, Ryanair and Tui they were given confusing or incorrect information.

If a traveller does not meet the entry requirements and cannot board their flight, they have no recourse to a refund.

The UK and devolved Governments set the rules on testing for people’s return to the UK, and foreign governments in other countries determine the rules for UK passengers’ arrivals.

However, when Which? contacted a number of major UK airports, all confirmed that it is up to airlines’ ground staff to enforce these rules and decide if someone should be allowed on a flight.

All the airlines Which? contacted outlined that it is a passenger’s responsibility to ensure they meet the requirements for boarding, and that if they do not, they can be turned away from their flight with no recourse to a refund.

Posing as passengers, Which? phoned the customer service lines for BA, easyJet, Jet2, Ryanair and Tui three times each and asked the same four questions about testing requirements when flying to mainland Portugal.

At the time of the research, passengers travelling to mainland Portugal were required to take a test, regardless of previous infection or vaccination status. Only PCR tests – not lateral flow tests – were accepted for entry to Portugal, and only children up to the age of two were exempt.

The consumer watchdog’s mystery shoppers were given incorrect or contradictory information in seven of the 15 calls.

In four of the calls – two to BA and two to Tui – agents provided information that would have seen passengers turned away from their flight. Only two agents – one from Jet2 and one from Tui – were able to answer all the questions correctly.

Two Tui reps and one BA rep told the undercover researchers that vaccinated travellers did not need to take a test prior to their flight, with one of the Tui agents adding that children under 12 were exempt. Another BA rep said children under four were exempt from tests.

These answers were incorrect at the time of calling, and customers taking the advice would have been denied boarding, leaving them out of pocket for the entire cost of their flight or holiday.

One mystery shopper was also told by a BA rep that they did not need to take any documentation on holiday as long as they uploaded their test data to BA in advance. 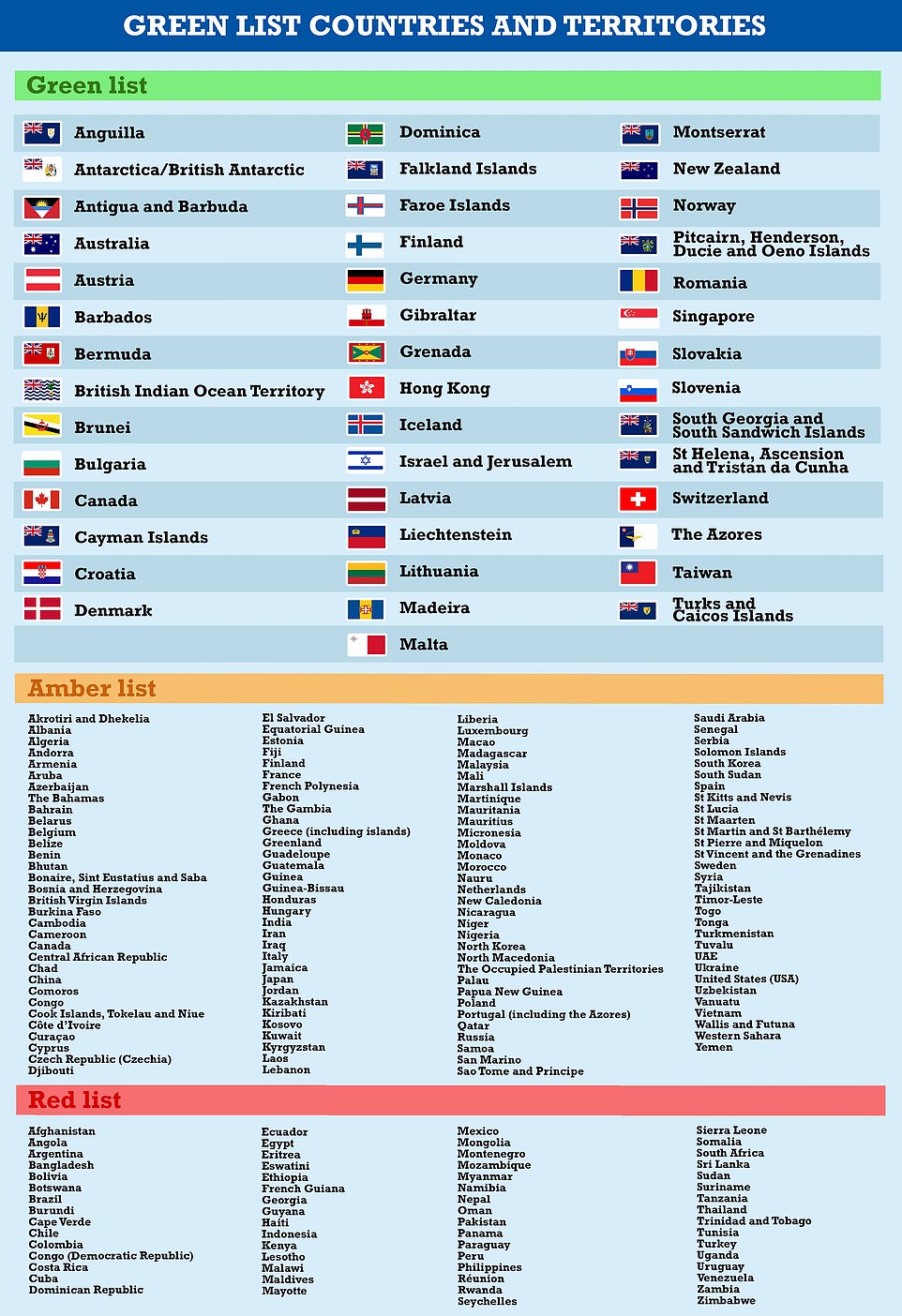 The advice may have been sufficient to board the flight, but it is unlikely to have allowed the passenger entry into their destination country.

Just two airline reps – for Jet2 and Tui – answered all of the questions with the correct information.

Six of the agents Which? spoke to – two BA reps, two easyJet reps, one Jet2 rep and one Ryanair rep – said they had never heard of lateral flow tests, despite these having been a common travel requirement for some time and of the same type distributed by the NHS for rapid coronavirus testing at home.

‘He needs to explain what’s going on’: Border Force chief on £140,000-a-year was made an OBE amid Heathrow chaos 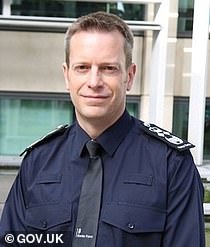 Mr Lincoln has had a long career in the civil service, which included serving in the Ministry of Defence and Cabinet Office.

Immediately prior to this appointment, he was Director General of the Crime, Policing and Fire Group (CPFG), which included overseeing reforms to the police and fire services, according to his official biography.

Before that, he was Acting Director General of the Office for Security and Counter-Terrorism (OSCT) in the Home Office, covering terrorism and organised crime.

Mr Lincoln has been the Home Office’s Gender Equality Champion, and in 2020 spoke about how the civil service could use data to ensure diversity targets were being met.

In May, quizzed about long queues at Heathrow, he said new Covid health checks at the border meant it took five to ten minutes to process every passenger.

In June, he was made an OBE for services to border security in the Queen’s Birthday Honours list. In July, it was announced he will leave his role as director general and be replaced by Tony Eastaugh, a former national counter-terror gold commander.

When the undercover researchers managed to speak to reps for Ryanair, they were told variously to ‘Ask the country’, ‘Check the Government website’, ‘Call the embassy’ or ‘Visit Ryanair’s website’.

Another easyJet agent gave one of the mystery shoppers a number they claimed was a Covid-19 advice line, but that actually turned out to be HM Revenue & Customs’ coronavirus helpline for businesses and the self-employed.

Which? said it strongly advises travellers against contacting their airline for Covid-19 travel advice, and to instead consult the Foreign, Commonwealth & Development Office (FCDO) website, which is the best source of information on testing requirements and travel rules.

Which? Travel editor Rory Boland said: “When airlines are responsible for deciding whether a passenger can board their flight or not, it’s essential that their staff have a thorough and accurate understanding of the rules. Otherwise, passengers could be left out of pocket for the entire cost of their flight or holiday if they follow the wrong advice.

“The most reliable place to look for information on testing requirements for travel to your destination is the FCDO’s website – here you’ll find the most up-to-date information regarding entry requirements, traffic light changes, and other critical information before you travel.”

A British Airways spokesman said: “Our colleagues are trained to advise our customers that they are required to check they meet the entry and testing requirements of the country they’re visiting. We also provide information in emails and on ba.com.

“While we don’t believe the issues raised in Which?’s three calls are representative of the hundreds of thousands we handle, we’ve reminded colleagues to keep referring customers to gov.uk to avoid unintentional confusion.”

An easyJet spokeswoman said: “We continually review the information we equip our agents with and provide them with ongoing and extensive training, and so we continue with this to ensure that agents are providing accurate and consistent advice to customers.

“However, we always remind customers that ultimately it is their responsibility to ensure they meet entry requirements and will continue to advise customers to check the local government requirements prior to departure.”

A Jet2 spokeswoman said: “Our contact centre teams are dealing with an unprecedented number of inquiries, whilst at the same time dealing with ever-changing travel advice from the UK Government, which often comes with little or no notice.

“We would like to thank Which? for bringing this to our attention. Although we provide consistent messaging for our teams to use, alongside regular training, we will take steps to address this feedback.”

A Ryanair spokesman said: “This is more fake news from Which? All Covid-19 travel requirements are fully set out on Ryanair’s website, and are emailed to all passengers 24 hours prior to travel. We do not expect our call centre agents to be experts on the multiple Covid travel restrictions, which apply across 40 different countries.”

“We always strive to provide the best service possible for our customers, and our agents are trained and updated with new information on an ongoing basis.

“Extra training to support fight-only queries is being provided, and, to help customers further, detailed and current entry requirement information is available on our dedicated Covid hub.”