Khaled Temssah listed his attributes like he was making a pitch in his daytime job of selling cars.

He knew martial arts, could use a rifle and had been hunting many times, spoke Arabic and was blessed with a “good tongue” for speaking with others, had leadership skills, was a quick learner and happy to be trained, and could get $5000 within a fortnight. Most of all, he was devoted to the ideology. 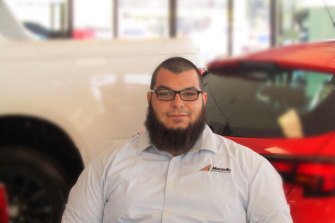 Khaled Temssah has been jailed for preparing to travel overseas and engage in hostile activity.

Temssah’s online exchanges with a man on the Wickr messaging platform in June 2019 showed he was deadly serious about wanting to travel from Melbourne to India to fight in the disputed region of Kashmir. Terror organisation Islamic State claimed it had established a province in India in the months before.

It was Temssah’s intention, the County Court heard, to avenge his “brothers and sisters” by fighting in Kashmir and, if necessary, to die as a martyr. Though not a member of Islamic State, he wrote he had made a pledge of allegiance in “my heart”.

Over 17 days, he sent messages and an audio file on Wickr, unaware that his contact was an undercover operative posing as an extremist. Temssah wrote in one message: “I want to be on the front line, brother, with the mujahideen [jihadi fighters] and I want to give my life to Allah so how much for flights and what (is) the next step I take?”

He also met another undercover agent, at a service station, to hand over $880, which he thought would go towards acquiring an AK-47 assault rifle when he arrived in India. 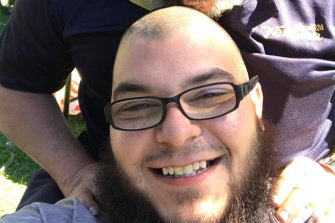 Khaled Temssah must serve another 18 months before he is eligible for parole.

On Wednesday, judge Justin Hannebery jailed Temssah for four years and nine months after the father of two pleaded guilty to preparing to travel overseas to engage in hostile activities, a terror-related offence that carries a maximum penalty of life in prison.

The Melbourne-born 32-year-old has been in custody since his arrest at his workplace, a Holden dealership in Melbourne’s northern suburbs, and must serve another 18 months before he is eligible for parole.

Judge Hannebery said Temssah became devoted to an extreme ideology in the year before his offending, and was found with violent, extremist material on his laptop, some of it distributed by Islamic State. The speed of his conversion was “concerning” and by June 2019 his commitment to those beliefs “was at the time absolute”.

“You were prepared to kill and give your own life in adherence to an extremist philosophy,” Judge Hannebery told Temssah, who watched a video link from prison.

“Your actions were not those of someone with an interest in, or a loose commitment to, radical beliefs.

“You were prepared to deceive and then leave your family to give your life for those beliefs.”

Temssah never got his hands on a weapon. But the deposit he paid, his acts in booking flights, a hotel room in New Delhi and arranging a lift to the airport with an associate – under the guise of a holiday to India – were preparatory acts which left “no doubt” of his plans, Judge Hannebery said.

There was no suggestion of entrapment by the undercover agents, as Temssah initiated the contact and freely outlined his beliefs and intentions.

However, Judge Hannebery accepted the man’s previous evidence under oath, where he renounced his devotion to his extreme beliefs.

The judge acknowledged Temssah’s guilty plea, prior good character, and reasonable prospects for rehabilitation. His crime was in the low to middle range compared to other terror offences.

Temssah, described in court as much-loved by family and friends and with a past involvement in community charities, has served two years and three months since his arrest.