Care home residents say they are being asked to sign letters agreeing to not be taken to hospital if they become ill the coronavirus.

Elderly people are being asked to sign the agreements en masse as hospitals come under intense pressure from thousands of patients with the infectious disease.

People over the age of 80 are known to be the most at risk of dying if they catch COVID-19 and account for 52 per cent of all the fatalities in England so far.

And the NHS has admitted that life-support machines could have to be prioritised for younger or healthier patients if an overloaded hospital is left with a 50/50 choice.

One woman living in a care home in Wiltshire, Elizabeth Diacon, 97, said she and ‘several friends’ were asked to sign the letters but claims she did not feel pressured.

Ms Diacon, who worked in military intelligence at the Bletchley Park codebreaking operation in Milton Keynes in World War Two, said: ‘I’m not afraid of dying but I’m rather afraid of how I might die. I’d rather do it here than go to hospital.’

It comes as there are fears elderly patients won’t get life-saving care despite the Government banning the use of blanket Do Not Resuscitate (DNR) orders for groups of people.

One family speaking to MailOnline said medical staff in a hospital in Hertfordshire told them their relative, who has both dementia and COVID-19, would not be saved if they started to die. 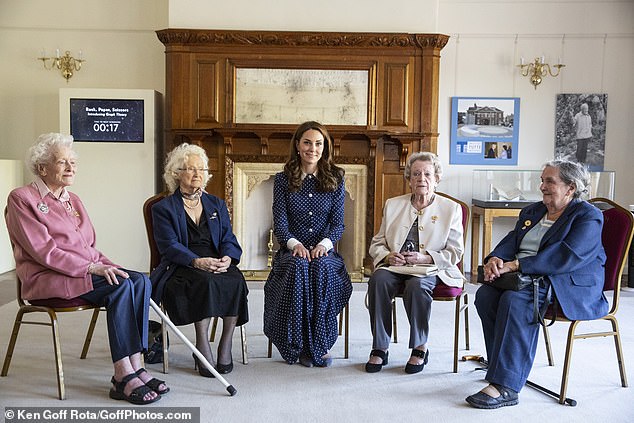 Elizabeth Diacon, pictured left in pink, met with Catherine, Duchess of Cambridge, in May last year to discuss her role in military intelligence at Bletchley Park, Milton Keynes, in World War Two

Speaking on BBC Radio 4’s Today programme this morning, Ms Diacon said ‘all who could’ at her care home had been asked to sign the letter.

‘To say that if we fell ill that we would not go to hospital,’ she said. ‘Unless of course we broke a hip or something.’

Ms Diacon said she ‘presumed’ the form was referring to the event in which they became critically ill with the coronavirus, which causes pneumonia.

She added: ‘I don’t know where the form came from but I’ve spoken to several friends in care homes and they’ve all had to sign it.’

A ‘hidden epidemic’ of coronavirus in care homes may have cost 4,000 lives, experts warned last night.

They believe deaths are being hugely under-reported because of a lack of testing.

GPs are also sometimes reluctant to write COVID-19 on death certificates and figures from care homes are not included in the official daily toll.

The latest report from the Office for National Statistics says the virus killed 217 care home residents in England and Wales up to April 3.

But industry figures say the true count is much higher – potentially 4,000 since the outbreak started.

Campaigners and MPs warned yesterday of an ‘unfolding horror’ that could end up with tens of thousands of forgotten victims.

Ministers face urgent calls to get a grip and get virus tests for all staff and residents with symptoms, more protection gear and a Cabinet minister to deal with the crisis.

Health Secretary Matt Hancock last night pledged action on testing and is also expected to outline a plan to address the crisis in a social care strategy.

Care home operators complain they are being overlooked, with desperate short – ages of testing and staff safety equipment making it extremely hard to stop the disease ravaging their sites.

Asked whether she felt she had been pressured into signing the form Ms Diacon told the BBC: ‘You didn’t have to – you were asked if you would sign it, to agree.

‘And I thought I would rather be ill here than go to hospital. Our local hospital is much overworked and it has the virus there.

‘I’m not afraid of dying but i’m rather afraid of how I might die. I’d rather do it here than go to hospital.’

When questioned about the letter, Health Secretary Matt Hancock said they were ‘standard procedure’ and that it was appropriate as long as people aren’t pressured.

He claimed that residents often say they would rather die in the home than a hospital ward, adding: ‘It is reasonable and right, I’d argue a good thing, to ask people their wishes.’

The form is not the same as a Do Not Resuscitate (DNR) order, which dictates that someone should not be given CPR if they die.

It would, however, mean someone wouldn’t get the lifesaving medical care available in a hospital and be limited to what care home staff and on-site doctors can provide.

The Government was yesterday reported to have banned the use of blanket DNRs in care homes as the industry faces devastating situations amid outbreaks in nursing homes around the country.

Guidance sent out by ministers, the Evening Standard reported, said: ‘It is unacceptable for advance care plans, including Do Not Attempt Resuscitation orders, to applied in a blanket fashion to any group of people, and the CQC have been urgently contacting providers where this practice has been brought to their attention.’

But people are still thought to be being affected by restrictions on care for elderly patients.

One family told MailOnline that they had been told their female relative would not be offered life-saving care if her condition deteriorated.

They said: ‘She has early onset dementia and COVID. She’s on a ward… and the staff have said they won’t help her if she gets worse. The family are so upset’.

A letter sent from the Association of Directors of Adult Social Services (Adass) to the Department of Health at the weekend has shown the care chiefs accuse a senior figure at the Department of overseeing a ‘shambolic response’.

It raised concerns about testing in care homes, funding for the sector, and inadequate amounts of personal protective equipment (PPE) for staff, the BBC reported.

Adass said it was facing ‘confusion’ and additional work as a result of mixed messaging put out by the Government.

It said the situation around PPE, which is now mandatory for all healthcare workers, was ‘shambolic’ and that deliveries had been ‘paltry’ or ‘haphazard’.

The care sector, which looks after around 400,000 of Britain’s most vulnerable people, was being overlooked while officials focused on the NHS, Adass said as they raised fears of a ‘significant imbalance’.

The bosses added that they welcomed coronavirus swab testing for people working in social care but said it looked as it if it would be ‘rolled out without being given thought to who is going to be tested and what we are going to do with the result,’ according to the BBC.

Earlier this month care homes in Brighton were told that residents would not be admitted to hospital because it might increase their suffering.

One care home manager told the Daily Mail they felt ‘shocked and numb’ at the advice issued by Brighton and Hove Clinical Commissioning Group (CCG), adding that a GP had even told them ‘none of your residents aged over 75 will be admitted to hospital’.

Another said: ‘We have been told flatly that it would be highly unlikely that they would be accepted into hospital.’

Similar guidelines were sent out to family doctors in north-west London, who were told that they would face ‘difficult decisions’ about whether to admit care home residents to hospital.

Some care homes have reported dozens of deaths already and routine testing is not yet being carried out on residents or staff.

Bosses in the sector say thousands of people have been infected with the virus and as many as two thirds of homes could have outbreaks, but the Government’s supply of personal protective equipment has been ‘shambolic’ and ‘haphazard’.

And it has emerged that the NHS in England rowed back on ‘prejudiced’ guidance for care home staff to avoid taking elderly residents to A&E if it could be helped.

The A&E guidance had been published over the Easter weekend but has since been withdrawn, the HSJ reported.

Homes had been advised to try not to take residents to A&E if they had problems that could be dealt with elsewhere, dementia patients with minor head injuries or anyone with a do-not-resuscitate order, the Health Service Journal reported.

A boss inside the NHS, speaking anonymously, told the specialist news site the guidance had been ‘prejudiced against older people, those with dementia and those in care homes.’

They added that it would have placed ‘obstacles’ between vulnerable elderly people and emergency departments.

And the notes advising homes not to take to hospital dementia patients who had hit their heads but were ‘functionally unchanged’ was at odds with policy set out by the NHS regulator, the National Institute for Health and Care Excellence.

NHS England said it regularly updates guidance and this time had changed it within four days.

A spokesperson said: ‘Decisions about when a patient would benefit from hospitalisation are judgements for clinicians to take in consultation with patients and their families in the usual way.’

Health Secretary Matt Hancock today put forward a view of the care home situation that was in stark contrast to what insiders have said.

Speaking on Good Morning Britain, Mr Hancock said there had been outbreaks of COVID-19 in 15 per cent of care homes – one in seven.

‘That is a robust figure that we have high confidence in,’ the Health Secretary said.

But his claim is in stark contrast to statistics from Scotland, which show that 40 per cent of all the country’s care homes have reported cases of the virus.

And Sir David Behan, non-executive chairman of one of Britain’s biggest care home operators, HC-One, said he thinks two out of every three homes have outbreaks.

Last week he told BBC Radio 4 that HC-One had recorded more than 2,400 cases across 232 of its 330 homes around the UK – showing infections have appeared in 70 per cent of the company’s locations.

He agreed that an estimate of two-thirds of all homes in the UK having coronavirus cases was a ‘realistic picture’.

Does Harry and Meghan’s son Archie have a royal title? – The Sun | The Sun