An Indiana coroner has reportedly determined that fugitive jail guard Vicky White died by suicide during the Monday police chase that resulted in the capture of escapee Casey White and ended an 11-day manhunt for the pair.

Vicky White, 56, shot herself in the head following Monday’s police pursuit in Evansville, Indiana, Vanderburgh County Coroner Steve Lockyear told The Associated Press. The autopsy examination was completed on Tuesday and determined she died by suicide.

White was an assistant director of corrections for Lauderdale County Detention Center in Florence, Alabama, on April 29 when she left the jail alone with Casey Cole White, who was being detained at the facility while awaiting trial.

The pair led federal and local law enforcement on a multi-state manhunt that lasted 11 days. After gaining intel that the couple was staying at a local Motel 41, police who were surveilling the building spotted the pair leaving and a police chase ensued, Vanderburgh County Sheriff Dave Wedding said Tuesday.

U.S. Marshals ultimately caught up to them, “rammed the vehicle and pushed it into a ditch,” Wedding said.

“We later found out had they not done that, the fugitive was going to engage in a shootout with law enforcement,” Wedding said, explaining that Casey White had admitted his intentions during a subsequent police interview. “He said that he was probably going to have a shootout at the stake of both of them losing their lives.” 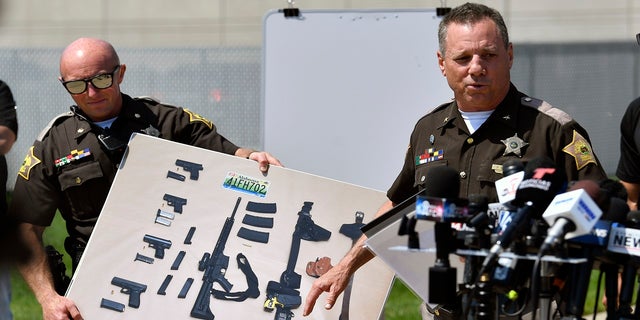 Vanderburgh County Sheriff Dave Wedding shows a photograph of the weapons that were found in the possession of fugitives Casey White and Vicky White following their capture during a press conference in Evansville, Ind., Tuesday, May 10, 2022.
(AP Photo/Timothy D. Easley)

Casey White was serving a 75-year sentence for a slew of crimes from 2015, including carjacking, a home invasion and a police chase. He had been serving his sentence at the William E. Donaldson Correctional Facility in Bessemer, Alabama, but had been transferred to the Lauderdale County jail while he awaited trial for the 2015 murder of 58-year-old Connie Ridgeway. 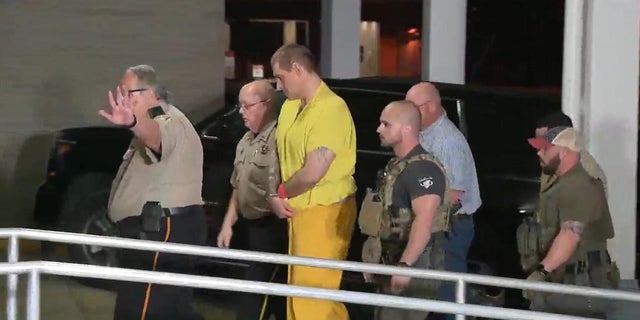 Casey White arrives back in Alabama after 11 days on the run.
(Fox News)

He was extradited from Indiana to Florence, Alabama, where he appeared before a judge before he was transferred to William E. Donaldson Correctional Facility.

In the months before the escape, Vicky sold her home for about half of what she could have gotten and allegedly had about $90,000 in cash when she and Casey fled. April 29 was due to be her last day before retirement.

Vicky White was facing charges including forgery, identity theft and permitting/aiding an escape.

If you or someone you know is experiencing suicidal thoughts or a mental health crisis, please call the National Suicide Prevention Lifeline at 800-273-8255.

Ukrainian bishop: Putin is the 'anti-Christ of our current time'