Damning Bradford child abuse report reveals victim was raped by dozens of men, forced into Islamic marriage aged 15 and was put into ‘domestic slavery’ while pregnant

A survivor of child sexual exploitation (CSE) has told an independent review how social workers condoned her Islamic marriage to one of her abusers at the age of 15 and left her with his family in a state of ‘domestic slavery’.

Police, council and health officials in Bradford have apologised to children identified in a report on CSE in the city for ‘where the actions of agencies in Bradford has failed to protect them’.

The independent review, published on Tuesday, said: ‘At an early stage in the process of conducting this review it became clear that despite some significant improvements in agency understanding of and responses to CSE between the less recent and current cases, agencies and individuals in Bradford have not always got it right.’

The review was commissioned in the wake of the sentencing of nine men in 2019 following the sexual exploitation of a child in the care of Bradford Council. 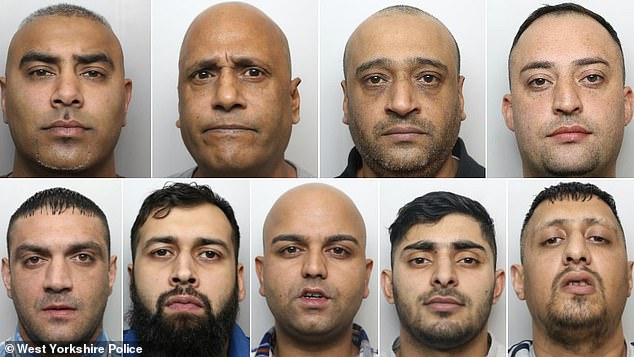 The review was commissioned in the wake of the sentencing of nine men in 2019 following the sexual exploitation of a child in the care of Bradford Council. Pictured: Basharat Khaliq, Saeed Akhtar, Naveed Akhtar, Parvaze Ahmed, Zeeshan Ali, Fahim Iqbal, Izar Hussain, Mohammed Usman and Kieran Harris who were all jailed at Bradford Crown Court in 2019

The report featured the stories of five children including a girl referred to as Anna who was placed in residential care as a teenager but went missing more than 70 times.

Anna disclosed sexual abuse and coercion, including rapes, to a specialist project working with her but none of this was passed on to police or social workers due to client confidentiality, the review said.

When Anna was 15, she told the project worker she converted to Islam and married her older Asian ‘boyfriend’ in a Sharia law ceremony.

The report said: ‘It appears that there was collusion with this by her Children’s Social Care (CSC) social worker who allegedly attended the ceremony and assessed that her marriage was likely to reduce the risks incurred when Anna was missing.’

Anna then became pregnant and was placed with the family of her ‘husband’ as a foster child.

The review said: ‘This placement did not protect Anna from harm but did in fact place her at greater risk and made her entirely dependent on them.

‘Whilst in the ‘care’ of these adults she was subjected to further sexual abuse and exploitation, domestic abuse including assaults and coercion and what we would now recognise as domestic slavery during the time she lived there.’

The review said that ‘during the time Anna was in care, she was being sexually abused and exploited by dozens of adult males, some of whom were known to her ‘boyfriend/husband’.’

Fiona Goddard, who was groomed and sexually abused in Bradford by men from 2008, told the BBC she was failed ‘multiple times’ by authorities

Anna told report author Clare Hyde numerous social services assessments were carried out ‘but nothing ever acted on, and I was failed for more than two decades’.

Anna told Ms Hyde: ‘I was 15, but the authorities thought it was in the best interest and to minimise the severity of my absconding and placed me in a foster care placement while being fully aware with the parents of my abuser.

‘We had no similarities in race, religion or culture and I continued be subject to domestic violence and was subject to a coercive controlling sexual relationship with a known perpetrator.

‘I was frightened to leave, in fear of an honour-based killing.’

She said: ‘I was manipulated and controlled while I was on a local authority care order the authorities should have protected me however they allowed abuse to occur for numerous years.’

And she added: ‘The local the authorities allowed and witnessed a Sharia Law Nikah wedding to take place allowing a man to carry out sexual activity on a child to occur on a daily basis which is illegal.’

The review was commissioned in the wake of the sentencing of nine men in 2019 following the sexual exploitation of another child in the care of Bradford Council, referred to as Fiona in the report.

Fiona told Ms Hyde that the impact of how she was treated by professionals was as ‘bad as the abuse’ and exploitation.

The report said: ‘In summary Fiona was not kept safe by agencies who had responsibility for her wellbeing and the abuse, assaults, exploitation and other harms she experienced were not acknowledged or addressed.’

Fiona Goddard, who was groomed and sexually abused in Bradford by men from 2008, told the BBC she was failed ‘multiple times’ by authorities.

‘I reported it multiple times – physical abuse, sexual abuse or rapes – and they were never followed up on.’

Ms Goddard, now 27, who has waived her legal right to anonymity, said most of the girls at the care home where she lived were victims of child sexual exploitation.

‘They had the opportunity to nip it in the bud and save me from years of abuse but they never did.’

The review was commissioned in 2019 to understand the experiences of these two young women and other survivors but its publication was delayed by Covid.

It said: ‘We want to apologise to the young people identified in this report and any others where the actions of agencies in Bradford has failed to protect them from child sexual exploitation (CSE).’

The statement said ‘significant changes’ have been made over the past decade and a large number of defendants have been found guilty and sentenced to substantial prison sentences.

It said: ‘We fully accept more needs to be done which is why, along with recovery from the Covid-19 pandemic, ensuring our children are safe will be the partnership’s number one priority.

‘We believe that practice across all agencies is improving and that we have learnt from the mistakes made in the past but there is much more to do.’

No10 says Carrie Symonds is 'on maternity leave' and NOT 'interfering'