Children as young as nine are asked ‘is Santa REAL?’ for homework sparking furious parents to accuse headteacher of ‘taking away magic of Christmas’

Parents complained to a headteacher after schoolchildren as young as nine were given homework which asked whether Santa was real.

The school was accused of ‘taking away the magic of Christmas’ after pupils also took part in classroom debate on the subject.

Year 5 children at St Cuthbert’s CofE Primary in Darwen, Lancashire, were set the homework last week with the debate then taking place on Monday, despite several protests from parents. 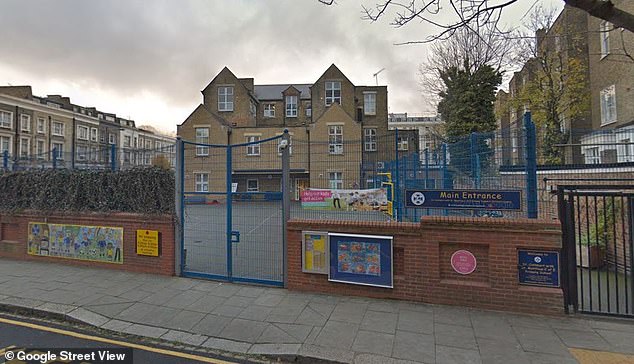 Children at St Cuthbert’s Primary School in Darwen, Lancashire, pictured, were asked to complete homework to determine whether or not Santa is real

The project, headed by actor and director Paul Simpson, takes place at five schools across the borough.

One mother told the Lancashire Telegraph: ‘This has caused a lot of upset. Choosing this topic to debate, especially this time of year, takes away from the magic of Christmas. I don’t think it’s appropriate.’

But Mr Simpson, 46, who goes into school to teach the festive lessons, defended the subject matter.

He said it wasn’t about talking away the magic of Christmas but getting children to engage in a project where they can ‘learn and use new skills in research, public speaking and debate’.

He added that pupils at the school had decided that Santa did actually exist.

But she told the Lancashire Telegraph: ‘The aim was to help develop their research, reasoning and promoting empathy for other people’s viewpoint.

‘The topic was chosen to help get into the Christmas spirit and help bring back the magic of Christmas for any children who have doubts.’

The project takes place at four other schools in the area – Wensley Fold, St Thomas’s in Newton Street, St Michael and St John’s, and St Silas’s.

Clarity on critical race theory: It’s a political drive, not an educational one

Mother-of-two, 38, died after drink-driving the wrong way down the M4