A rocket carrying the Chang’e-4 lunar lander blasted off at about 2.23am local time on Saturday from Xichang Satellite Launch Centre in southern China.

Chinese authorities did not broadcast the launch, but an unofficial live stream recorded near the site showed the rocket rise from the launch pad until its flames looked like a bright star in the area’s dark skies. 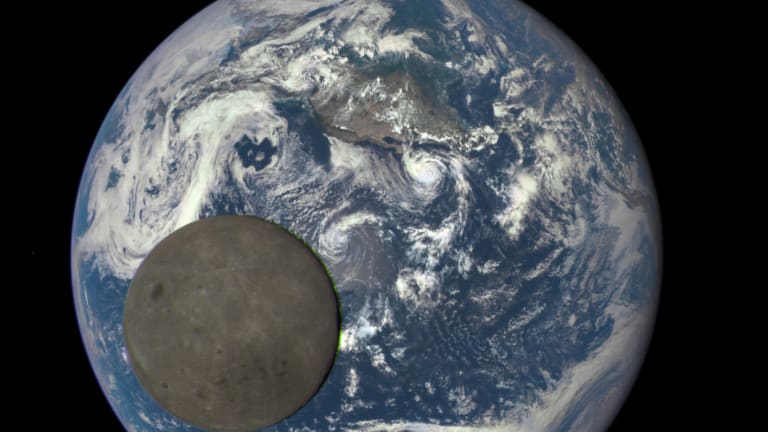 A view of the Moon as it passes between the spacecraft and Earth.Credit:earthobservatory.nasa.gov

Exactly when it will set down at its destination has not yet been announced — possibly in early January — but Chang’e-4 will provide the first close-up look at a part of the moon that is eternally out of view from Earth.

If all goes according to plan, the spacecraft – named after the mythical Moon Goddess – will land within weeks in the moon's Aitken Basin, where it will take images of the surface and samples of the soil.

Landing in this unexplored region will enable Chang'e-4's rover to better study the moon and space because of the lack of electromagnetic interference from Earth. The rover is equipped with a low-frequency radio spectrometer to help scientists understand "how the earliest stars were ignited and how our cosmos emerged from darkness after the Big Bang," according to China's official Xinhua News Agency.

The probe also will carry a tin filled with the seeds of potatoes and arabidopsis, a small flowering plant related to cabbage and mustard, Xinhua reported. Scientists will test whether the plants can grow while on the moon.

Chang'e-4 also may carry silkworm eggs to conduct the first biological experiment. None of the government agencies involved in the space program – including the State Administration for Science, Technology and Industry for National Defense; China's National Space Administration; and China's Lunar and Deep Space Exploration — have published details of the Chang'e-4 launch.

The spacecraft is largely a clone of Chang'e-3, which landed on the moon in 2013. Indeed, Chang'e-4 was built as the backup in case the first attempt failed. With the success — the first soft landing of any spacecraft on the moon since 1976 — the Chinese outfitted Chang'e-4 with a different set of instruments and decided to send it to a different location.

In May, China launched a relay satellite called Queqiao that's now orbiting about 450,000 kilometres from Earth, where a gravitational equilibrium can be maintained so it stays on course to relay messages from the rover back to Earth.

Chang'e is a series of probes that China has launched into orbit and landed on the moon. Chang'e-3, launched in 2013, and its rover Yutu, or Jade Rabbit, surveyed the moon's geology and natural resources after a soft landing.

The country also plans to launch its first Mars probe by the end of this decade, according to a white paper on China's space activities issued in 2016. It also aims to build its own space station in 2022, Xinhua reported.

The nation wants to be one of the world's top three aerospace powers by 2030, Wu Yanhua, vice administrator of the China National Space Administration, said last year. Its space budget is about $8 billion a year, second only to the U.S., according to the Space Foundation in Colorado Springs, Colorado.

Next year, the Indian government is planning to launch a mission, Chandrayaan-2, that includes an orbiter, a lander and a rover. SpaceIL, an Israeli team that was a finalist in the Google Lunar X Prize, is also still aiming to send a robotic lander to the moon early next year, even though the $20 million prize has expired.

NASA announced last week that nine companies will compete for robotic missions to carry science experiments to the moon. The space agency said the first of those could go as early as 2019, but most of the companies said they would not be ready until 2021.

Jim Bridenstine, the NASA administrator, has praised the Chang'e-4 mission as exciting, and at the International Astronautical Congress in Bremen, Germany in October, talked of possible collaboration with the Chinese space agency. Federal laws limit any NASA interaction with the Chinese.

NASA is pursuing a dual path of building a lunar orbital platform and returning astronauts to the moon in the mid-2020s, with the eventual aim to send humans to Mars. The Mars InSight craft landed on the planet last month to study its interior to help answer questions about the early days of the solar system.

Bloomberg with The New York Times

If you win the $1 billion Mega Millions jackpot, here's what you need to know