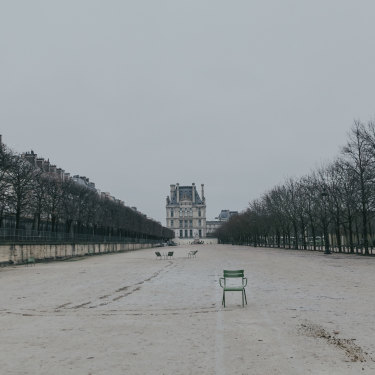 erhaps the most famous line in the movies was wrong.

But Paris is gone for now, its lifeblood cut off by the closure of all restaurants, its nights silenced by a 6pm curfew aimed at eliminating the national pastime of the aperitif, its cafe bonhomie lost to domestic morosity. Blight has taken the City of Light. 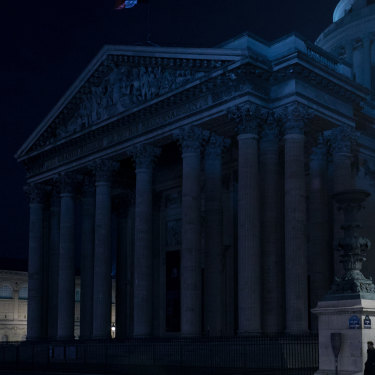 The Panthéon before the 6pm curfew begins in Paris.Credit:New York Times

Taboos fall. People eat sandwiches in the drizzle on city benches. They yield — oh, the horror! — to takeout in the form of “le click-and-collect.” They dine earlier — an abominable Americanisation. They contemplate with resignation the chalk-on-blackboard offerings of long-shuttered restaurants still promising a veal blanquette or a boeuf bourguignon. These menus are fossils from the pre-pandemic world.

Gone the museums, gone the tourist-filled riverboats plying the Seine, gone the sidewalk terraces offering their pleasures at dusk, gone the movie theaters, gone the casual delights of wandering and the raucous banter of the most northern of southern cities. In their place, a gray sadness has settled over the city like fog.

“Parisian gloom is not simply climatic,” author Saul Bellow wrote in 1983. “It is a spiritual force that acts not only on building materials, on walls and rooftops, but also on your character, your opinions and your judgment. It is a powerful astringent.” 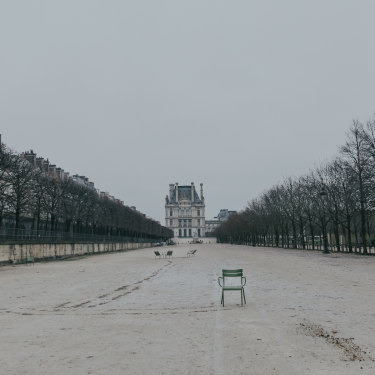 Bellow, however, could still stop for a sauvignon blanc and a plate of charcuterie when the Parisian grisaille— that depthless monochrome that can envelop even the Eiffel Tower — gave him the January blues. Not in this damp Parisian winter, as the toll of COVID-19 mounts and the city’s ghostly streets follow one another like T.S. Eliot’s “tedious argument.”

I have seen sunlight three or four times since arriving from New York about seven weeks ago. A glimmer, a summons to life, gone soon enough to leave doubts as to whether it was real. New York does not do drizzle or weeks of uninterrupted gray skies.

So my adaptation has been harsh, particularly to a Paris with its soul torn out. 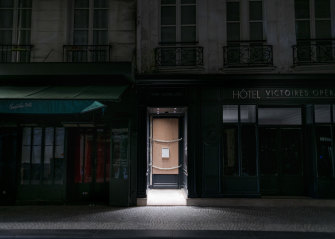 A closed hotel on Rue Montorgueil in Paris.Credit:New York Times

“It’s of an absolute sadness,” Alain Ducasse, the celebrated chef, said when I asked how Paris felt these days. “It’s a terrible imprisonment. The French are not accustomed to life without its social side — a drink at a cafe, a touch, a kiss.”

Yes, even the “bisou,” the little kiss on both cheeks that is a rite of greeting or farewell, is gone.

With more than 74,000 people dead across France from the pandemic, everyone understands the restrictions imposed. Almost all major cities across the world have had to endure lost lives, lost jobs, lost ways of life. Paris is far from alone in its deprivations.

But each city changes in its own way. In New York, the absence that feels most acute is of the energy that defines it. In Paris, the hole in its heart is the absence of the sensual conviviality that makes people dream. It is the disappearance of pleasures the French have spent centuries refining in the belief there is no limit to them. 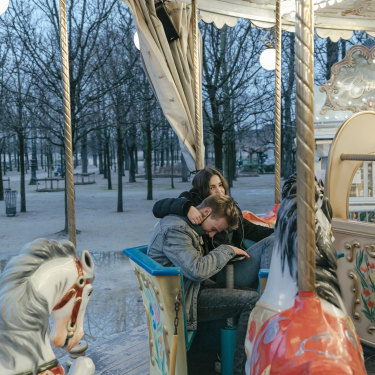 A couple ride the carousel, the only open attraction in the Tuileries park, in Paris.Credit:New York Times

Life is monotonous. There is really nowhere to go. “We’ll only have Paris,” a friend feeling claustrophobic grumbled the other day. He has bought a dog because he is allowed to walk it after the curfew.

Frédéric Hocquard is responsible for tourism and nightlife in the mayor’s office. He told me the number of tourists in Paris was down about 85 per cent last year. Visits to the Louvre and Versailles, both now closed, were down about 90 per cent.

Hotel occupancy is running at about 6 per cent.

One bright spot: The number of Parisians going up the Eiffel Tower last year doubled.

“One of the characteristics of a true Parisian is that he or she has never ascended the Eiffel Tower,” Hocquard said. “We started to change that.”

All it took was the elimination of alternatives. 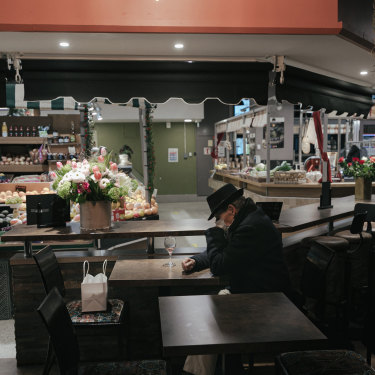 A man sits in the covered market in Saint-Germain-des-Prés in Paris.Credit:New York Times

There are other upsides to this Parisian misery. Traffic flows. Markets are unbowed with their gleaming-eyed oyster shuckers, their butchers taking five minutes to truss each quail, their oozing Camembert cheeses prompting debate about ripeness, their rum baba cakes with little syringes to inject the rum.

The city’s islands still point their prows toward the low-slung bridges of subtle fulcrums. The 19th-century wrought-iron lampposts down the deserted Rue de Rivoli cast a dreamlike procession of light, as if in a film noir. (With a press pass it is possible to go out after the curfew). Paris quieted is also Paris in a reverie.

Then, he insisted, the revival would begin. I asked if he had traveled. Only to Bologna in Italy, he said, to recruit a master maker of gelato. After starting a successful chocolate business a few years ago, his next venture will be ice cream.

Hocquard is also eyeing April and May, planning concerts and other outdoor activities in parks, on the banks of the Seine, even at underused airports. 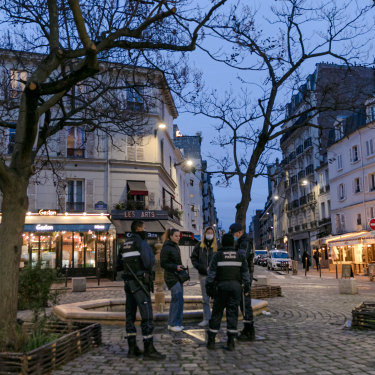 Paris City Hall officials check the papers of people out after curfew in the Place de la Contrescarpe in Paris.Credit:New York Times

Such optimism leaves the problem of dealing with the present. One recent snowy Sunday, I went to the Tuileries in search of distraction. I have always liked the formality of this garden, the gravel paths, the pollarded trees, the geometric patterns. One attraction was still functioning: a carousel!

Round and round went colorful horses, an ostrich, a car, a plane, a ship and a couple of Cinderella carriages. My partner and I chose horses. The music was North African. There were a couple of children. The carousel, a little miracle, spun me down my intermittent Paris years stretching back to the mid-1970s.

Paris would be back — if not this spring, someday. I watched a crow advance, wedge a discarded French fry in its beak and fly off to perch on a bench. I gazed at a wall with plaques for French fighters killed during the liberation of Paris in 1944. The youngest, Jean-Claude Touche, was 18.

The pandemic has, in some ways, imposed conditions of war in time of peace. It, too, will end. With his famous wartime line from Casablanca—“We’ll always have Paris”— Humphrey Bogart was also telling Ingrid Bergman to leave him, stay with her husband and console herself with memories of the city of their love. It was an invitation to the imaginary.

Now more than ever, Paris must be imagined.

Calls for vaccine mandate on hospitality staff to protect regions

Who is Julius Jones and why is he on death row in Oklahoma?