More than 500 migrants have been rescued by an Italian military vessel from a decrepit smuggling boat drifting off the tiny southern Italian island of Lampedusa.

The rescue of 539 migrants from a single fishing boat on Saturday delivered one of the largest numbers of migrants to the Italian island in a single day.

The passengers aboard the vessel included three women and several unaccompanied minors, according to Alida Serrachieri, a nurse who runs the Doctors Without Borders’ operation on Lampedusa.

The migrants had been travelling across the Mediterranean Sea from Libya, but Serrachieri said she did not know how long the crammed fishing boat had been at sea. 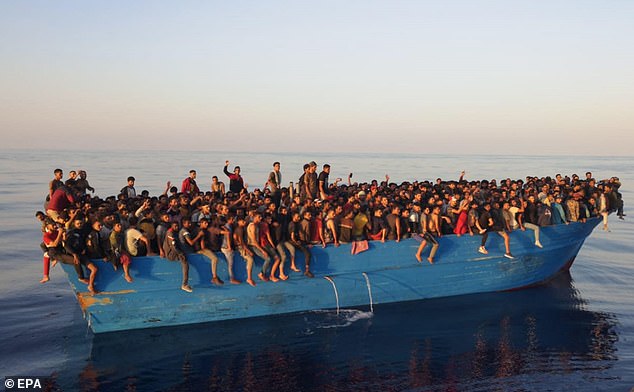 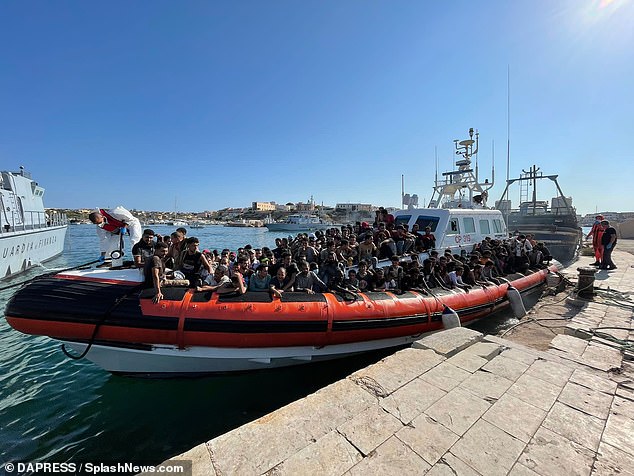 The passengers (pictured at the port of Lampedusa) aboard the vessel included three women and several unaccompanied minors, according to nurse Alida Serrachieri

But she added that the migrants had spent weeks or even months in Libya awaiting passage in traffickers’ boats in hopes of reaching Europe.

After being examined by medical personnel, it was discovered that at least 20 of the migrants had ‘wounds’ from torture or physical violence.

‘They had burn wounds, firearms wounds,’ Serrachieri said. ‘[They] were very worn down, some were dehydrated.’

Many of the migrants were from North Africa or West Africa but some were from Bangladesh, she added.

Italian prosecutors have opened an inquiry to determined what may have happened, with investigators looking at the possibility that the migrants may have been falsely imprisoned in Libya, according to local media. 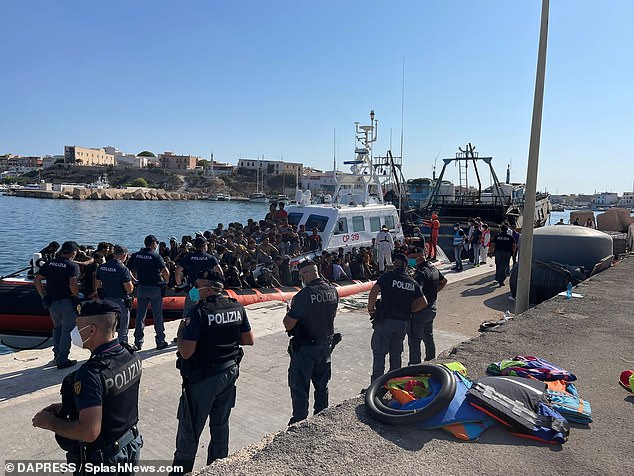 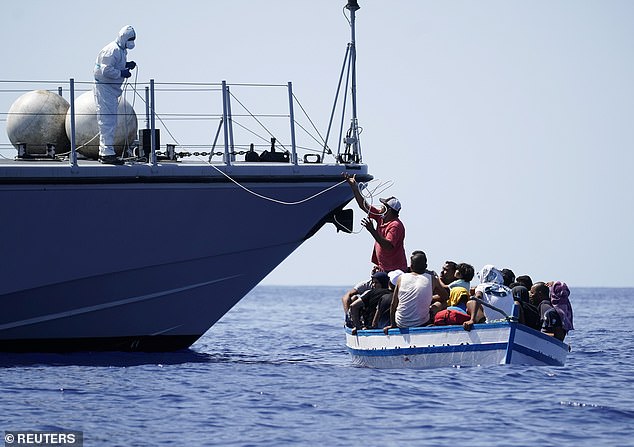 Earlier on Saturday, another two smaller boats (one pictured) with around 15 migrants each aboard also reached Lampedusa’s waters unaided from Tunisia 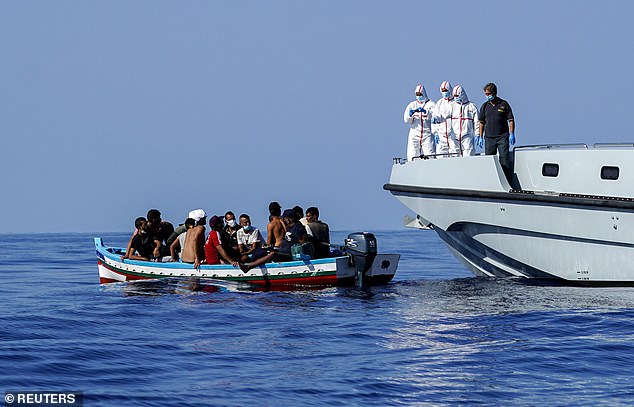 The island’s housing complex can hold about 250 people. Pictured: Members of Guardia di Finanza prepare to help around 15 migrants get on board on Saturday

The island’s Mayor Toto Martello has described Saturday’s rescue as ‘one of the biggest landings in recent times’.

Earlier on Saturday, another two smaller boats with around 15 migrants each aboard also reached Lampedusa’s waters unaided from Tunisia.

A third such boat with about 20 aboard was also spotted approaching Lampedusa on Saturday afternoon, Serrachieri confirmed.

The island’s housing complex, where migrants stay while the initial paperwork is done for asylum applications, can hold about 250 people.

But Saturday’s arrivals swelled the number of occupants to approximately 1,200, with many migrants awaiting transfer by boat to Sicily or the Italian mainland.

Political and economic crises in Tunisia are feeding steadily increasing streams of migrants determined to reach Europe, many of whom set out in smugglers’ boats from Libyan shores.

Earlier this month, Italy stepped up pressure on fellow EU nations to open their ports to migrants rescued by humanitarian ships as political tension simmers in the Italian government’s coalition over a sharply rising number of arrivals this summer.

The office of Interior Minister Luciana Lamorgese said she had a long telephone conversation with the European Union’s internal affairs commissioner, Ylva Johansson.

The Italian interior ministry’s statement said those factors figured in Lamorgese’s request for ‘an urgent change of direction in the interventions of the Union’s migratory policy’.

In May and June, the number of migrants who reached Italian shores more than tripled compared to the previous year’s figure, according to the ministry’s count.

Right-wing leader Matteo Salvini, whose anti-migrant League party, is a prominent partner in Premier Mario Draghi’s coalition, has been increasingly forceful in his criticism of Italy’s management of migration. 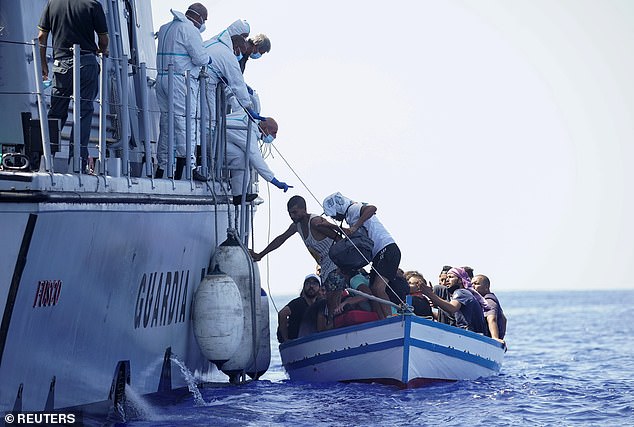 The island’s Mayor Toto Martello has described Saturday’s rescue as ‘one of the biggest landings in recent times’. Pictured: Around 15 migrants get on board finance police vessel 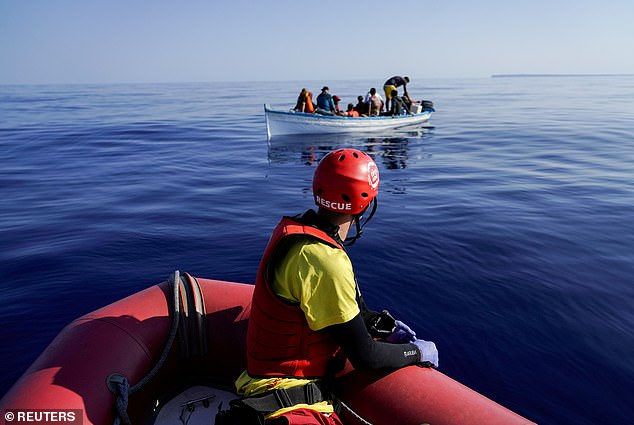 ‘I am convinced that Draghi will wake up Lamorgese,’ Salvini said earlier this month after talks with the premier. Lamorgese is a career interior ministry official who was tapped by the premier for the post when he formed his pandemic-unity government in February.

Salvini noted that in the first seven months of 2021, nearly 30,000 migrants have stepped ashore in Italy, roughly double the number in the previous year’s same period.

During the pandemic, Italy has been transferring many of the rescued migrants to unoccupied passenger ferries so the migrants can do a precautionary quarantine against Covid-19 before eventually transferring them to residential facilities on land.

Past years have seen Italy’s pleas for fellow EU nations to take in some of the migrants, many of whom want to reach families in northern Europe, go unheeded as part of a voluntary solidarity arrangement in the 27-member bloc.

Many of those brought to Italy’s shores are fleeing poverty, not conflict or persecution, and are eventually found to be ineligible for asylum.

But only a few countries, notably Tunisia, have repatriation agreements with Italy, and tens of thousands of migrants wind up staying illegally for years.