At least 40 passengers and crew from a luxury Norwegian cruise liner have been diagnosed with coronavirus amid fears of a major outbreak.

The cases were uncovered on board the MS Roald Amundsen after a passenger who took a trip on the vessel in mid-July tested positive last week.

Health officials are now scrambling to track down 387 people from two different voyages who were allowed to depart the vessel before the outbreak was uncovered. 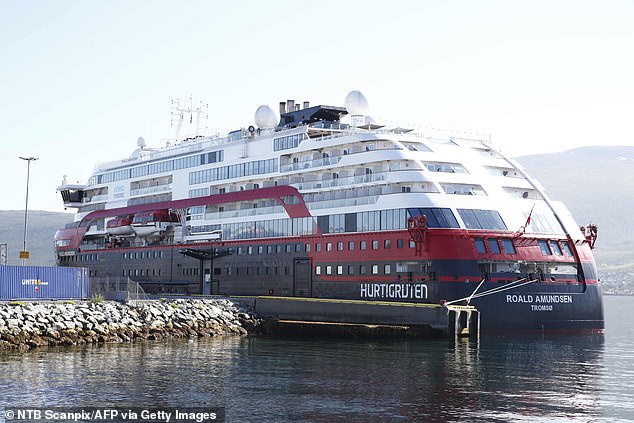 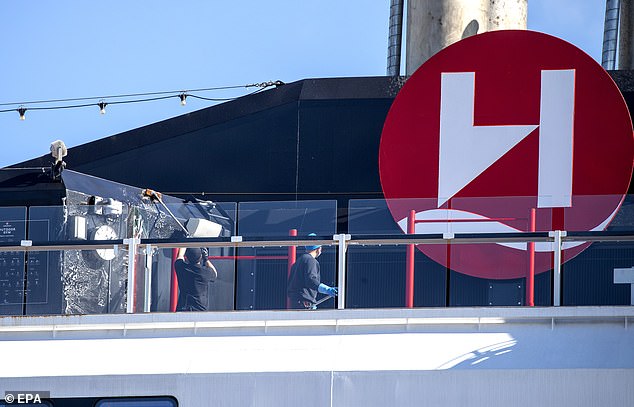 Authorities are now trying to track down 387 passengers who were allowed to disembark the vessel before the outbreak was reported (pictured, crew disinfect the ship)

Hurtigruten, the company which owns the ship, became the first in Norway to relaunch its ships in mid-June, following a three-week shutdown due to the virus.

The passengers hail from all 11 counties of Norway, prompting fears of a country-wide resurgence in the virus.

Norway has been widely-praised for its response to the virus so far after going into strict lockdown early, with 9,286 cases and just 255 deaths.

The outbreak is thought to have originated from a cruise to the Arctic island of Svalbard between July 17 and 24.

Upon returning from the cruise, one passenger fell sick and was tested for coronavirus – which came back positive.

Medics contacted Hurtigruten cruises to inform them of the diagnosis on July 29, while another Svalbard cruise on the same vessel was underway, Norway’s state broadcaster NRK reported.

However, the cruise line did not issue a public alert until two days later, after passengers on board that cruise – which ran from July 25 to 31 – had departed.

Bosses have admitted they failed to follow internal procedures for coronavirus outbreaks, and police have launched an investigation.

The company insists that all passengers have now been emailed telling them to get a coronavirus test, but they cannot confirm whether the emails have been received.

Public track and trace teams are now trying to directly contact each of the 387 passengers to alert them to the danger. 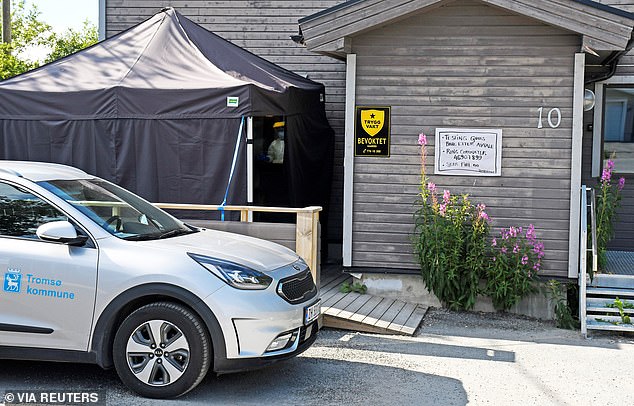 The owners of the ship admit they knew a passenger had fallen sick two days before they put out an alert, allowing 178 people to disembark without getting tested (pictured, a test centre)

The same crew travelled on both voyages. On Friday, four of them were hospitalised when the ship arrived back in the port of Tromsoe, and have since been confirmed to have the virus.

Subsequent tests showed another 32 out of 158 staff were infected.

In total, four passengers spread across both cruises have been diagnosed, but authorities say that number will certainly increase as more are contacted.

Hurtigruten announced Monday that it will be suspending all cruises until further notice.

Among the infected crew, 32 were from the Philippines while the rest were of Norwegian, French and German nationality, operator Hurtigruten said.

‘We are working hard to contain this outbreak in order to limit the spread in the general population,’ Tromsoe municipality chief doctor Kathrine Kristoffersen told a news conference.

At the start of coronavirus outbreak in early 2020, thousands of passengers became stranded on cruise vessels in the waters of Asia, the United States and elsewhere, leading operators to cancel journeys and triggering mass layoffs.

With measures such as reduced passenger capacity, social distancing and strict rules on hygiene, Hurtigruten aimed to persuade customers to return to the cruise industry.

The MS Roald Amundsen is scheduled to sail around the British Isles in September, docking at ports in England and Scotland.

Mum, 26, wakes up after doctors failed to detect a heartbeat for 72 hours