CASES of the coronavirus are back to levels seen before the second wave of the pandemic, fuelling hopes that the lockdown could be eased sooner rather than later.

Figures published by Public Health England (PHE) today have also revealed that 99 per cent of areas have witnessed a drop in infections.

Data from NHS Test and Trace show that there has been a 29 per cent drop in positive Covid cases.

The data from Test and Trace accounts for the seven days up to February 10 and shows that 106,474 patients tested positive for the virus in England.

The number of people testing positive is now only nine per cent
higher than in the week ending 2 December 2020.

In January infections peaked and more than 300,000 people tested positive in a week.

However in October, before the second national coronavirus lockdown was introduced in November – weekly cases were at around 100,000 a week.

During this time the country was separated into a Tier system, with some areas still being allowed to mix with people outside their households in pubs and restaurants.

PHE data released today showed that 147 of 149 local authorities saw a decline in cases per 100,000 people in the week to February 14. 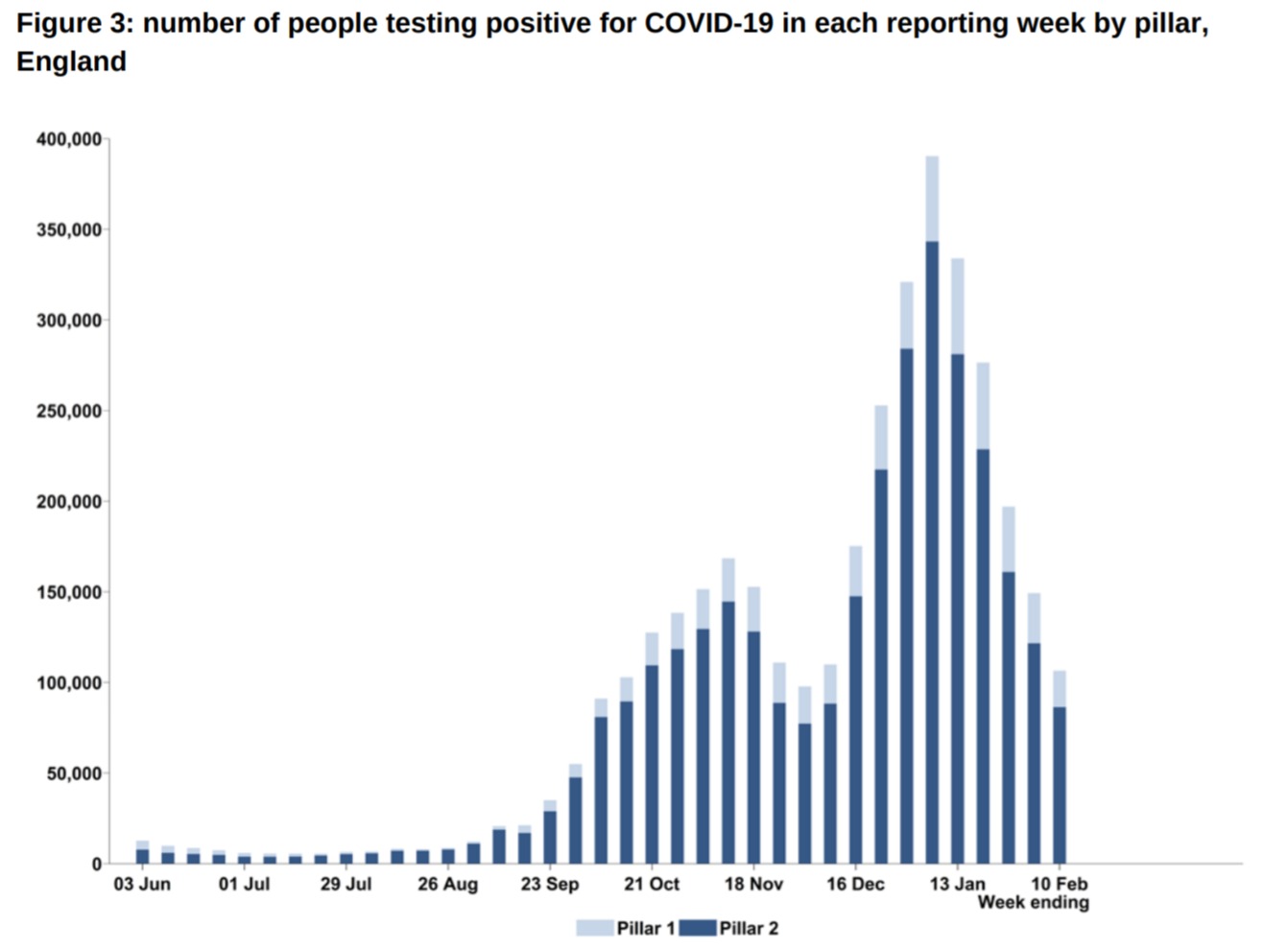 The two areas where infections rose were North East Lincolnshire and Tameside, by 12 per cent and nine per cent, respectively.

A number of the authorities where cases have remained stable, or hardly come down, are in Yorkshire – Doncaster, Rotherham, Calderdale and Barnsley.

Some are in Manchester, including Bury and Stockport, and in the North East – Darlington, North Tyneside and Redcar and Cleveland.

Huge improvements were seen in London, which battled sky high infection rates in December due to the new Kent variant.

The PHE report, published every Thursday, said Middlesborough had the highest case rate in the week to February 14, at 283 cases per 100,000, followed by Sandwell with 265. 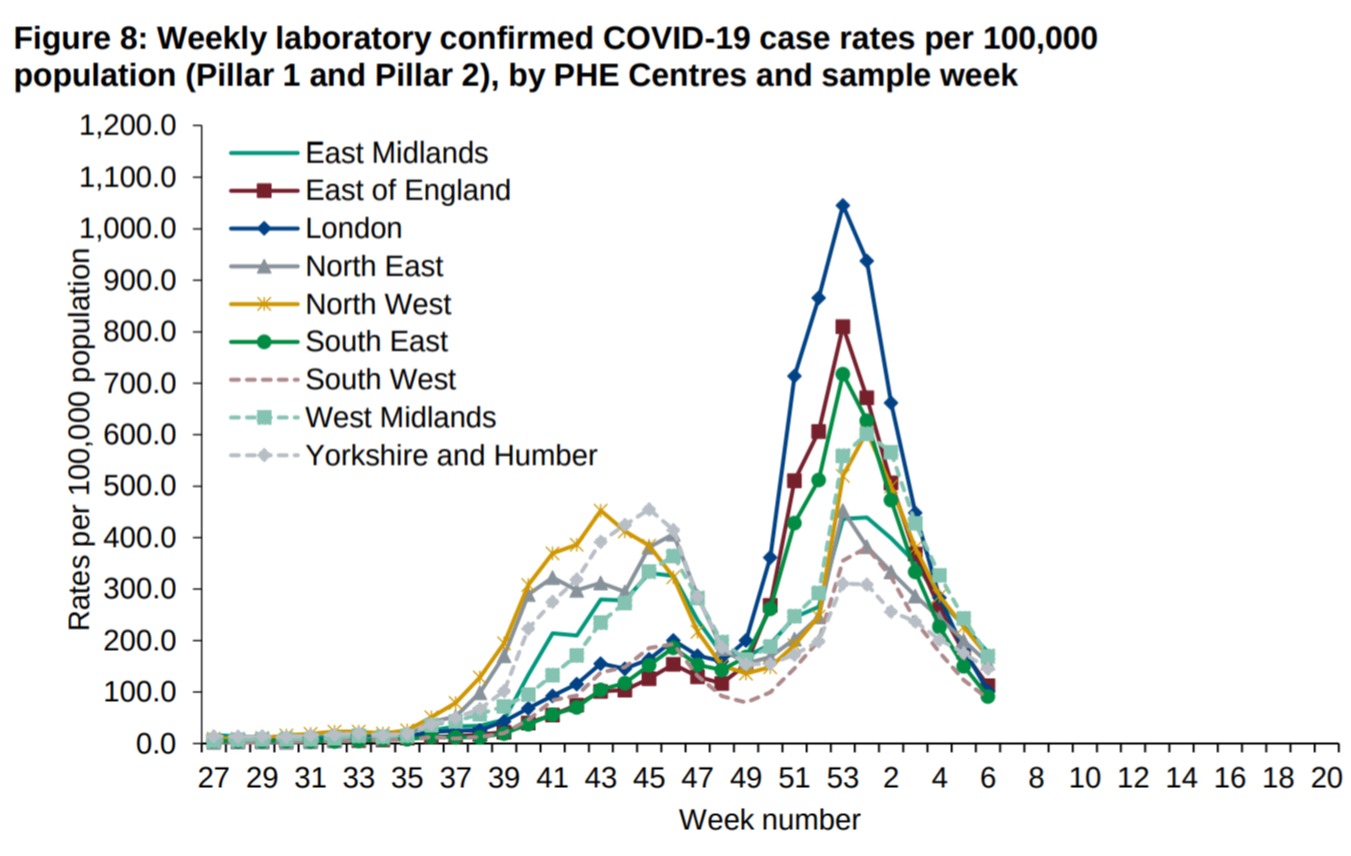 The data comes after a study by Imperial College London revealed that cases have dropped by two thirds since January.

Scientists hailed the plummeting cases as “really encouraging” yesterday, but warned pressure on hospitals must ease before we unlock the country.

Britain’s biggest virus infection survey found the R rate is down to 0.7, even as low as 0.6 in London.

The React study, by Imperial College London, carried out swab tests on 85,000 people across England between February 6 and 13.

They revealed all regions of England have seen a fall in cases – with London, the South East and West Midlands seeing the biggest dip.

Around 52 people per 10,000 are testing positive for the virus now, which is similar to the rates we saw in September last year.

Infections are halving every 15 days – which is good news for Prime Minister Boris Johnson as he gets ready to reveal the roadmap to get us out of lockdown.

Positive cases in all age groups have dropped, with the youngest schoolkids and young adults seeing the highest numbers.

Evidence from two different sources shows that infections are dropping across the country.

The drop in cases comes days before the PM is set to reveal his roadmap out of lockdown.

Mr Johnson said that it is "absolutely right" to take the "data not dates" approach ahead of easing restrictions in England.

Britain's lockdown fate could be decided as early as tomorrow when the PM receives the latest covid figures.

The crunch document will outline exactly where the UK is at the moment in terms of cases, deaths, tests and vaccines and will likely be the report which either confirms or changes Boris' lockdown roadmap plans.

On Monday the PM will announce the UK's route out of lockdown, which he insisted would be "cautious but irreversible".

Professor Paul Elliott, director of the React programme at Imperial College London, said that, while the latest findings are encouraging, there still needs to be a "cautious" approach.

He told Sky news: "At the moment the prevalence levels are still very, very high. We just have to get them down further. 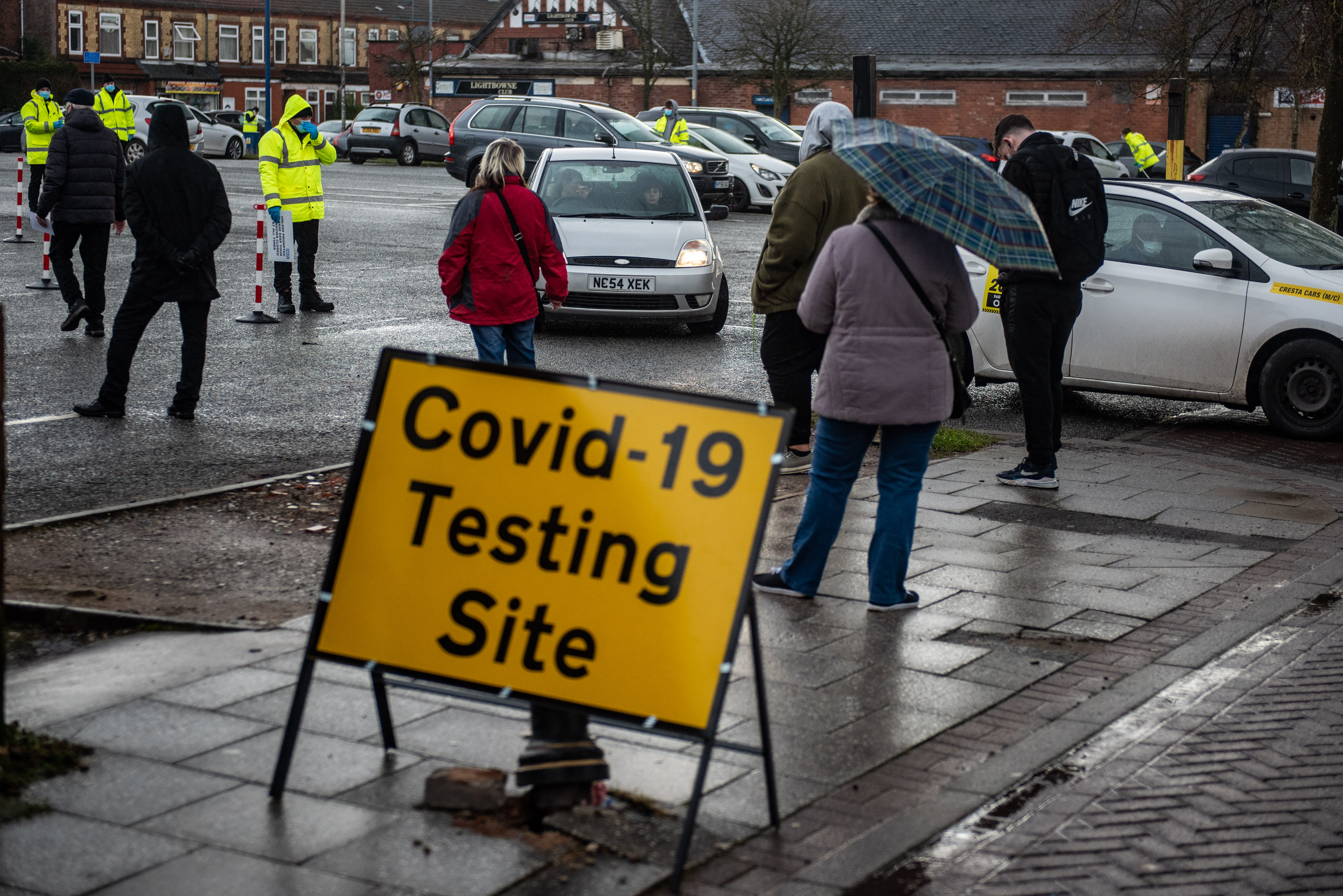 "It is really encouraging news, what we've seen reported today, that the virus is on the way down, the R value is robustly below 1, which means that the epidemic is shrinking rather than growing.

"But we just have to be cautious because, at the moment, as I say, the pressure on the NHS is still severe and there are still very large numbers of patients in hospital with coronavirus, sadly."

Figures from Test and Trace also show that cases are being spotted sooner.

These are swab tests carried out by PHE in hospitals and on those with a clinical need.

Test and Trace states that the percentage of tests made available within 24 hours has " increased in the last 7 weeks".

This, they say, is the highest percentage made available within 24 hours since reporting began.

Yesterday Chris Hopson, chief executive of NHS Providers, which represents NHS trusts in England said there were four things the government would need to ensure before lockdown was lifted.

They include waiting to see Covid infections plummet to under 50,000. The most recent figures from ONS put that number at 695,400 people with Covid in England and Wales.