With just over 10 days before the season turns, concerns are growing that the state’s health system will buckle under the pressure of winter viruses. There is good reason to be worried.

There are already reports of critically ill patients being resuscitated in hospital corridors and emergency departments overflowing. Ambulance ramping has become widespread. The daily seven-day average of COVID-19 cases in Victoria has gone well past 12,000, higher than it has been for several months – a trend that is reflected across the country. The death rate is also beginning to increase again, with Victoria’s seven-day average climbing to 16. There are more than 500 people in hospital, more than double the figure two months ago. 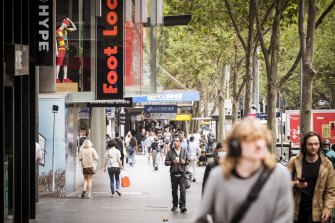 The reality is that the pandemic is not behind us. Lockdowns may no longer be a looming possibility, and most of the restrictions have been eased, but COVID-19, along with a significant return of the flu, is still causing enormous disruption.

This is no more obvious than in schools, where staff shortages across the state due to illness are forcing teachers to run classes remotely from isolation. Some campuses have had to send whole year levels home as staff pressures create concerns for teacher wellbeing. This is after the state’s schools removed the obligation to wear masks at the start of term two and while rapid antigen tests continue to be sent home, there is no longer a requirement to test twice a week.

In light of this situation, the president of the Victorian branch of the Australian Medical Association, Dr Roderick McRae, has said the association would support a move to reinstate some “moderate, but sensible [COVID-19] requirements” such as masks in supermarkets, theatres, concert halls and football stadiums, although he accepts that the politically fraught nature of such a move make it unlikely.

But such calls do raise the question of whether, as winter approaches, the Andrews government needs to take a more active role in slowing the spread of COVID-19 and other seasonal viruses.

It is true that many people have lost interest in playing their part in protecting themselves and, as a consequence, the broader community. This is most clearly seen in the vaccination rates. More than 30 per cent of Victorians aged 12 or older are yet to receive a booster dose, while just 56 per cent of those aged five to 11 have had one dose, which then drops to 41 per cent with two doses.

Mask wearing on public transport, one of the last places it is mandatory, is also falling away and the scrapping of the requirement to isolate if a person in your household has COVID-19 would have resulted in many more people in the community carrying the virus.

Australia is not alone in struggling to confront the lingering threat of COVID-19. In the US this week, the director of the Centres for Disease Control and Prevention warned that a third of Americans live in areas where the threat of COVID-19 is so high that they should consider wearing a mask in indoor public settings. But similar to Australia, there is little expectation that the Biden administration will reimpose any such mandates.

The fading interest from Australian governments in the battle with COVID-19 was evident during the election campaign. Besides attacks on Prime Minister Scott Morrison over his handling of the vaccine rollout and other shortcomings, it barely rated a mention. Even the enormous pressure on the hospital system did little to elicit a commitment by either major party to lift funding, despite the united call from Labor and Liberal premiers to increase the federal contribution from 45 to 50 per cent.

Last month, Premier Daniel Andrews said he hoped to allow the pandemic declaration, which was last extended in early April, to expire when the current powers ended on July 12. Under the state’s pandemic-specific legislation enacted last December, the premier of the day is responsible for declaring a pandemic while the health minister executes public health orders based on publicly available advice. Without such laws, the ability of the state government to enforce restrictions or mandates will be severely curtailed.

It could be argued that, in a public health sense, mothballing the pandemic laws in the middle of winter is misguided. But with the Andrews government having to face an election at the end of the year, the political reality is that it would have little appetite in extending the controversial laws.

And that, most likely, reflects the mood of Victorians, who appear willing to accept the risk of infection to resume their normal routines. Considering the length of lockdowns endured by the state, it is hardly surprising there would be a great deal of reticence to return to tighter restrictions.

But that should not stop people making sure they are fully vaccinated and that all the lessons learnt during the past two years that help limit the spread of a virus are not forgotten too quickly.

Gay Alcorn sends a newsletter to subscribers each week. Sign up to receive her Note from the Editor.

You can be Biden’s Delaware neighbor for $2.4MILLION as mansion next door boasts 5 beds and 8,700-acre lot