UK records 1,770 new Covid cases – up 6% in a week – with just two daily deaths as figures show a THIRD of all adults are now fully vaccinated

Coronavirus daily deaths tumbled by 86 per cent from 14 to just 2 in a week while cases rose slightly by 6 per cent in the same period as official figures show a third of UK adults are now fully vaccinated against Covid-19.

The latest Department for Health figures show that the number of daily virus cases rose from 1,671 to 1,770 on last Sunday while the number of Covid-19 deaths plummeted in further evidence of the efficacy of vaccines.

Official figures also show that more than 17.6 million people have now received both jabs, with England and Northern Ireland both estimated to have given two doses to 33.6 per cent of their adult population – slightly ahead of Wales (33.4 per cent) and Scotland (33.1 per cent).

Responding to the figures for England, Dr Nikki Kanani, GP and medical director for primary care at NHS England, said: ‘Yet another incredible NHS milestone has been reached as one in three adults in England have now had both doses of the Covid vaccine – meaning that they have maximum protection from the virus.

‘Reaching this milestone is no accident – it is down to months of hard work and everyone in the NHS who has played a role in this is helping to protect millions of people from serious illness and saving lives.’

Prime Minister Boris Johnson tweeted: ‘One third of adults in the UK have now had their second dose of the Covid vaccine, a testament to the extraordinary efforts of NHS staff and volunteers.

‘Thank you to everyone who has made this happen. Get your jab when called.’

It comes as Cabinet Office minister Michael Gove today declared that hugging friends and family will be allowed from May 17, when the latest stage of the roadmap is reached in a week’s time.

Mr Johnson is set to confirm the relaxation at a Downing Street press conference tomorrow, after the vaccine rolllout and plunging infections led to huge pressure from Tory MPs to speed up his plans.

The major step will be a huge relief to grandparents, most of whom have been unable to hug grandchildren for more than a year. It is also expected that funerals will be permitted to take place for up to 30 people from May 17 – a month earlier than anticipated.

But rules for weddings and ‘other life or commemorative events’ will update as expected, with only 30 guests able to attend indoor receptions until June 21. 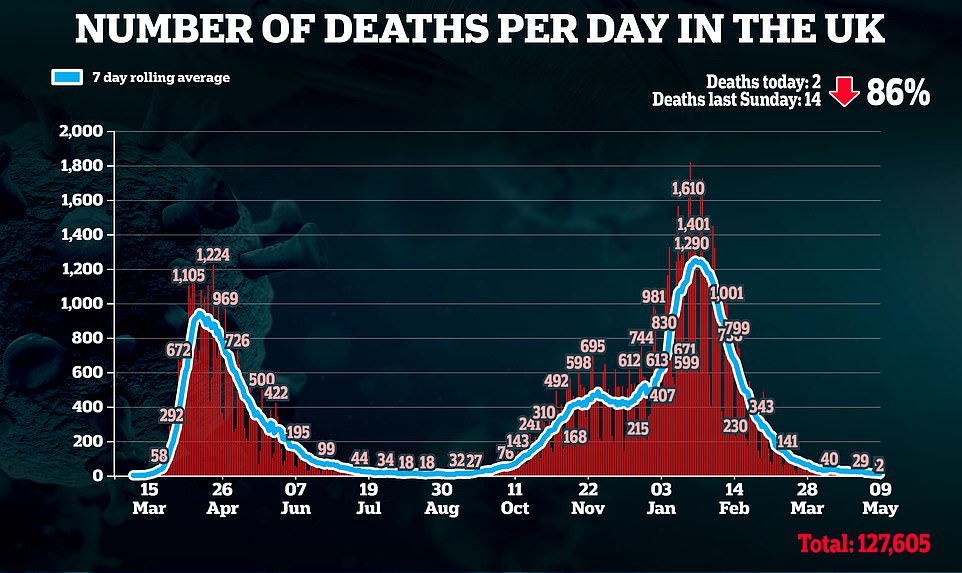 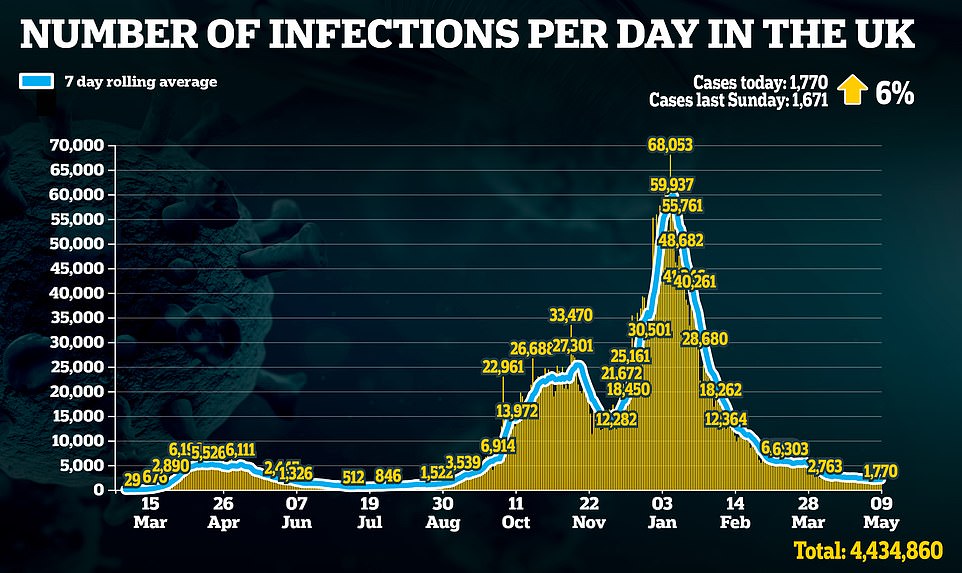 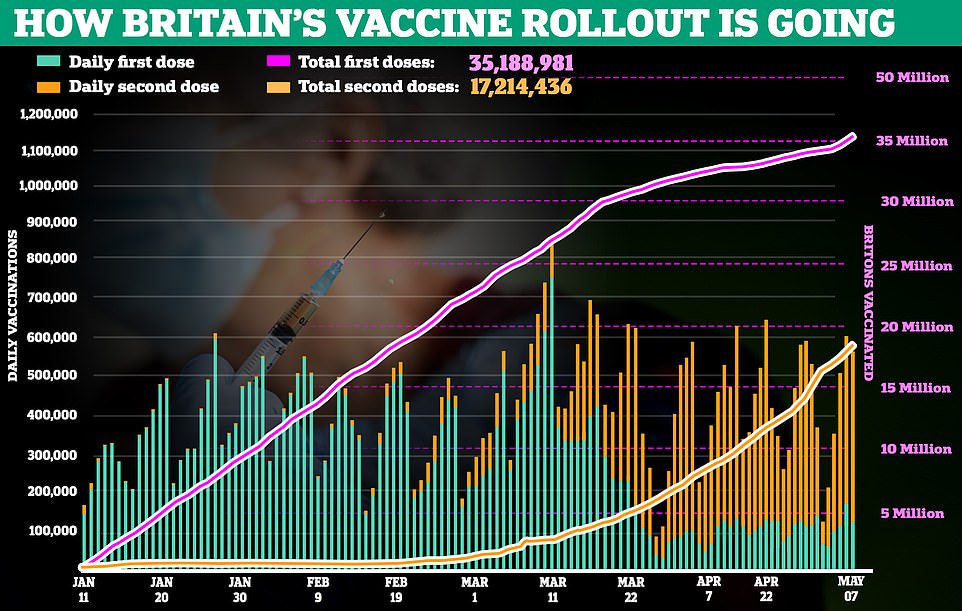 Boris Johnson is set to confirm the relaxation at a Downing Street press conference tomorrow, after the vaccine rolllout and plunging infections led to huge pressure from Tory MPs to speed up his plans 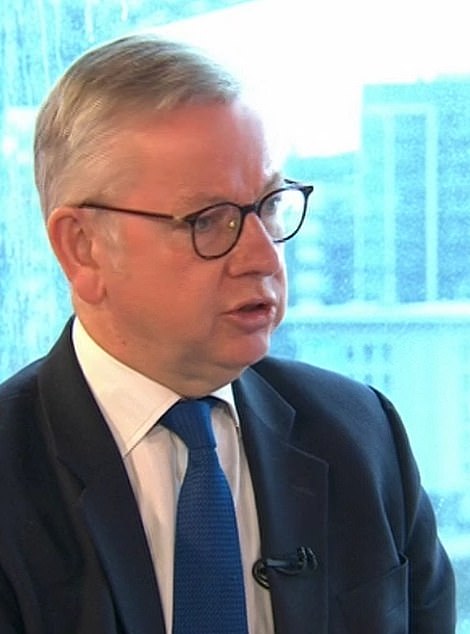 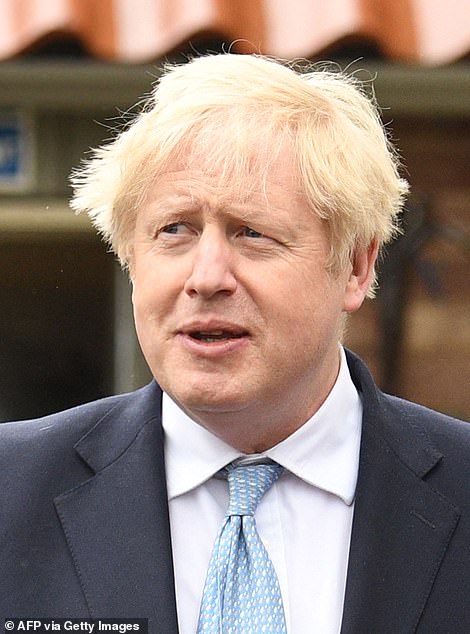 Speaking on the BBC’s Andrew Marr Show, Mr Gove said that the government wanted to restore ‘contact between friends and family’.

He said: ‘All being well, the Prime Minister will confirm tomorrow that there will be a relaxation, we’ve already indicated a proportionate relaxation on international travel, very limited at this stage because we have to be safe.

‘In the same way, as we move into stage three of our road map it will be the case that we will see people capable of meeting indoors.

‘And without prejudice to a broader review of social distancing, it is also the case that friendly contact, intimate contact, between friends and family is something we want to see restored.’

Asked if that meant hugs will be allowed again from around May 17, he said: ‘Yes.’

Mr Gove said he was ‘genuinely worried’ about Indian coronavirus variants and whether they might take hold in the UK. But he said currently there was not an issue that would derail the roadmap.

He said the Government is reviewing whether pupils should continue to wear masks in schools from May 17 – something Gavin Williamson previously said will be dropped.

Ministers have faced calls from union leaders for face coverings to remain in secondary schools and colleges for longer. When asked whether mask-wearing in schools will end, Mr Gove said: ‘What we want to do throughout is balance public health by making sure we can return to normal as quickly as possible.’

‘I won’t pre-empt that judgment, we’ll be seeing more about it shortly.’

Meanwhile, the head of the Oxford University vaccine group said he believed it is the right time to ease further restrictions in England.

Professor Andrew Pollard said the country has seen the ‘extraordinary success’ of both the vaccination programme and the ‘prolonged’ lockdown.

‘I think it is time to start, based on the very careful modelling that’s been done, relaxing some of those restrictions,’ he told BBC’s Andrew Marr Show.

‘That means we’re in a very fortunate position here in the UK.’

On Friday, the Government announced plans to allow international travel from May 17 after months of banning most trips abroad.

It was met with criticism from industry leaders who described the ‘cautious’ approach to unlocking foreign travel as ‘disappointing’, after only 12 countries were added to the quarantine-free green list.

A Downing Street spokeswoman said up to date guidance on weddings will be issued tomorrow, confirming the limit will increase to 30 as anticipated.

‘We are working with the wedding sector to facilitate a return to as near as normal as quickly as possible and understand the need for certainty to plan for the summer season,’ she said. 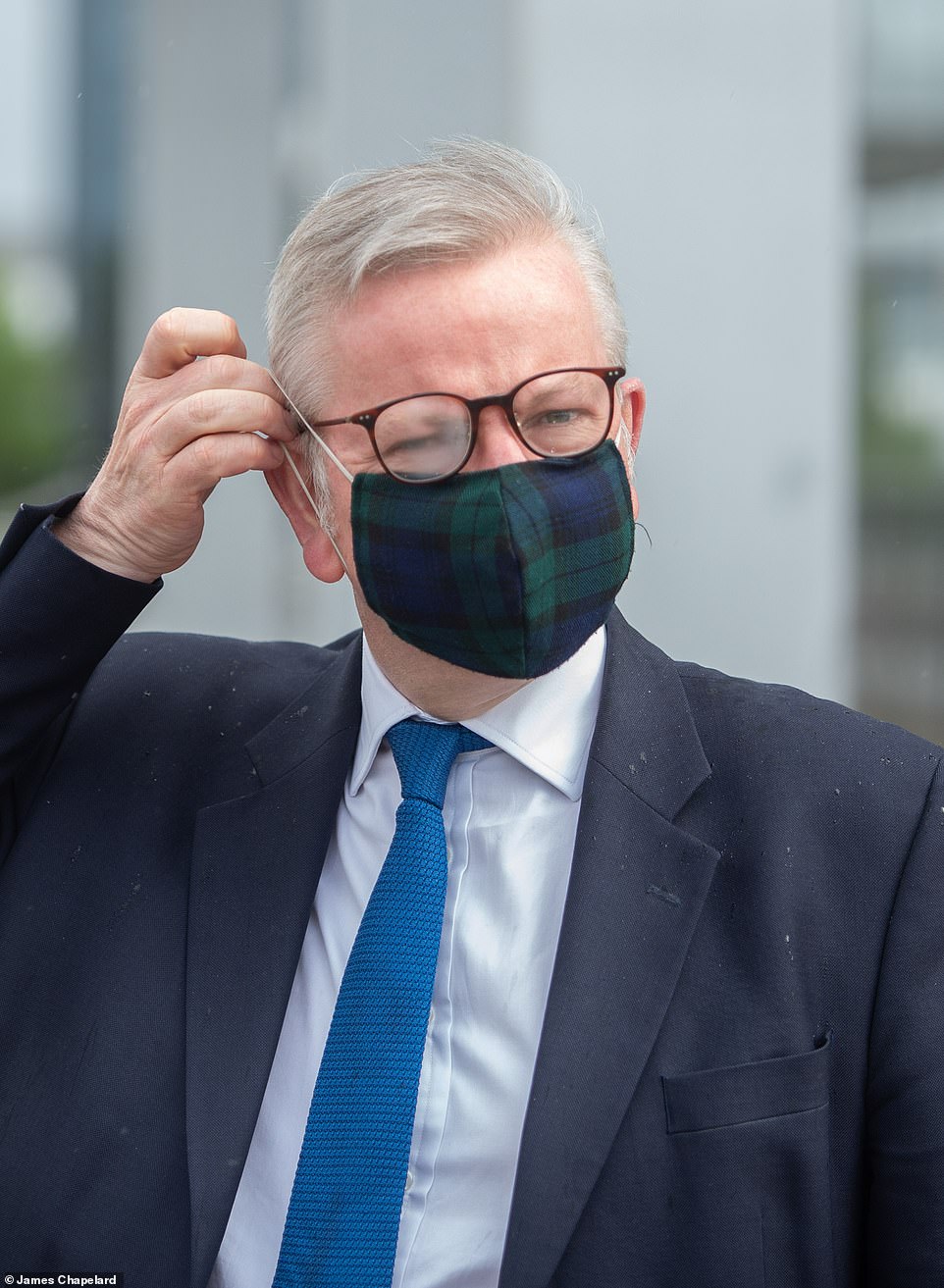 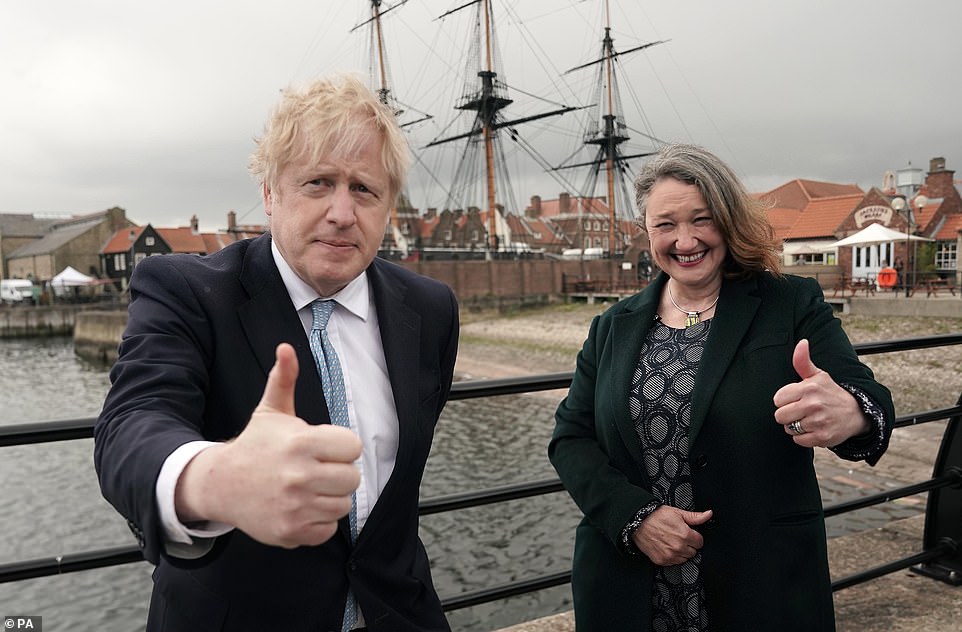 ‘As set out in the roadmap, the Government will increase limits for weddings and wedding receptions to 30 people at Step Three.’

An insider added: ‘While we understand the unique significance these events hold in people’s lives, we must continue to take necessary measures to limit the transmission of the virus.

‘We do not wish to keep restrictions in place for any longer than we have to.’

The Prime Minister will also confirm that care home residents in England will be allowed to make low-risk trips to places such as relatives’ gardens or a local park without having to self-isolate for a fortnight when they return,

Britain will take a huge step towards normality on May 17, when friends and family will be able to meet indoors for the first time since January under the rule of six.

Restaurants and pubs will also be able to cater to indoor customers, and foreign holidays will resume to a handful of approved ‘green list’ destinations.

Mr Johnson’s invitation to embrace – which will be welcomed by millions of families – follows news that Britain yesterday passed another vaccine milestone with more than two-thirds of adults now given a Covid-19 jab.

There were 2,047 positive tests across the country, the Department of Health announced, up 7.3 per cent on last Saturday’s number (1,907).

Officials also recorded just five lab-confirmed deaths within 28 days of a positive Covid swab, 28.6 per cent less than the number recorded a week ago.

The latest figures show that nearly 35.2million Britons have been given at least one dose of Covid vaccine, after another 119,349 first injections were administered on Thursday.

The NHS also dished out a further 449,716 second doses, bringing the total number of people fully vaccinated against the disease to 17.2million.

Some 66.8 per cent of adults have had a first jab, while nearly a third have had their second. 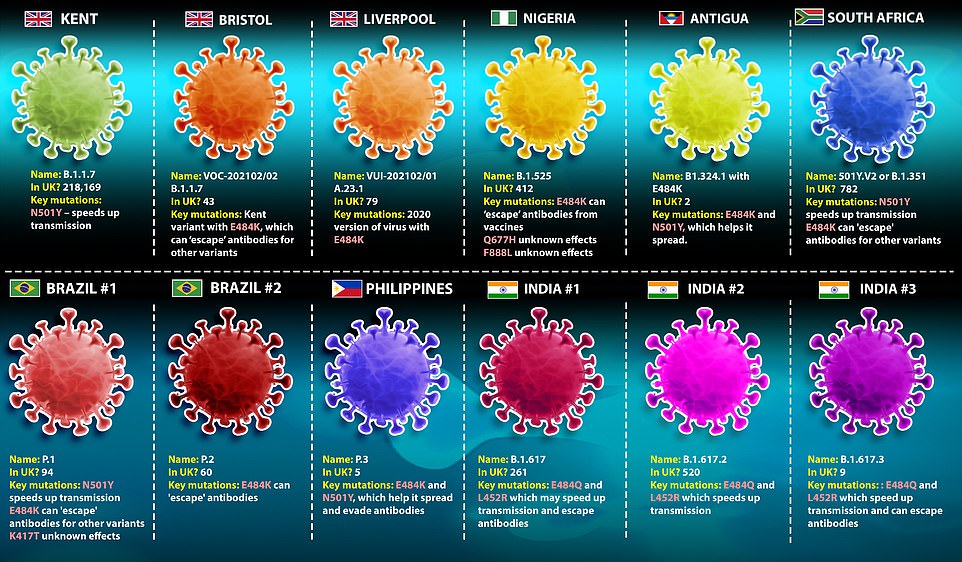 Public Health England has divided the Indian variant into three sub-types because they aren’t identical. Type 1 and Type 3 both have a mutation called E484Q but Type 2 is missing this, despite still clearly being a descendant of the original Indian strain. It is not yet clear what separates Type 1 and 3

Surge testing has been happening in the former mill town of Bolton, which has been identified as a hotspot for the Indian Covid variant.

Mr Johnson said last week that tracking of the Indian variant will be ‘absolutely ruthless’.

Celebrating the Tories delivering a hammer blow to the Labour’s Red Wall in the local elections, he said: ‘What we’re doing there is making sure that we are absolutely ruthless in the surge testing, in the door-to-door tracking of any contacts.

‘At the moment we’re looking carefully at the way the Indian variant seems to function, we don’t see any evidence that it is resistant to the vaccines or in any way more dangerous.’

But an expert has warned the Prime Minister’s roadmap out of lockdown might be delayed because of outbreaks of the variant.

Dr Duncan Robinson, policy and strategy analytics academic at Loughborough University, yesterday said a ‘political decision’ may be taken to slow down easing restrictions because the strain could disproportionately affect areas where there are outbreaks.

But speaking in Hartlepool on Friday, Mr Johnson also said he ‘can’t see any reason’ to delay the remaining steps along the out of lockdown.

Early research suggests both the AstraZeneca vaccine, known as Covishield in India, and the Pfizer jab, still work against the variant.

Large groups of revellers chanted ‘Freedom’ and sang songs as they unleashed their emotions and boozed on take-out alcohol after the threat of fines of more than £500 was lifted.

There were reports of clashes between partygoers and police in some parts of Madrid as officers tried to dissolve large gatherings of people without face masks on. 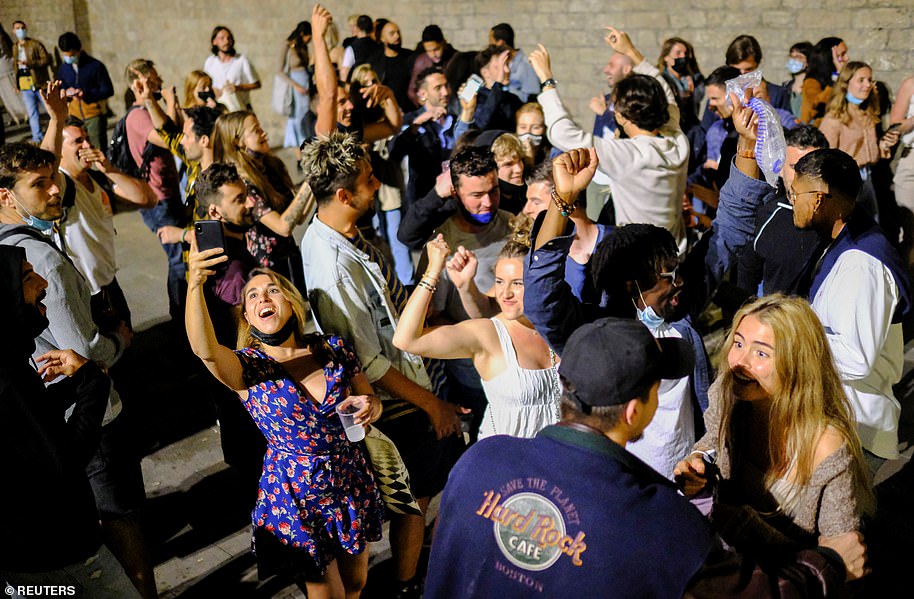 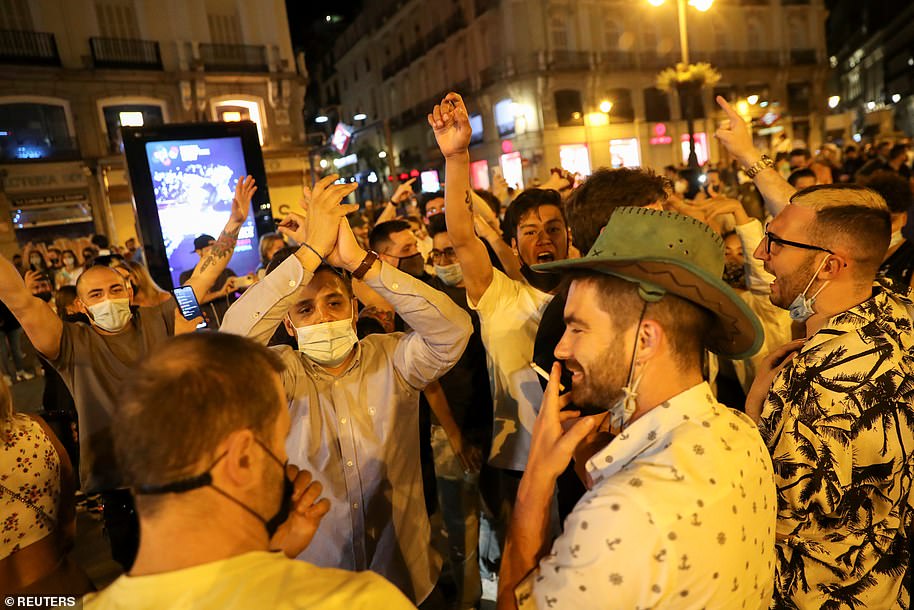 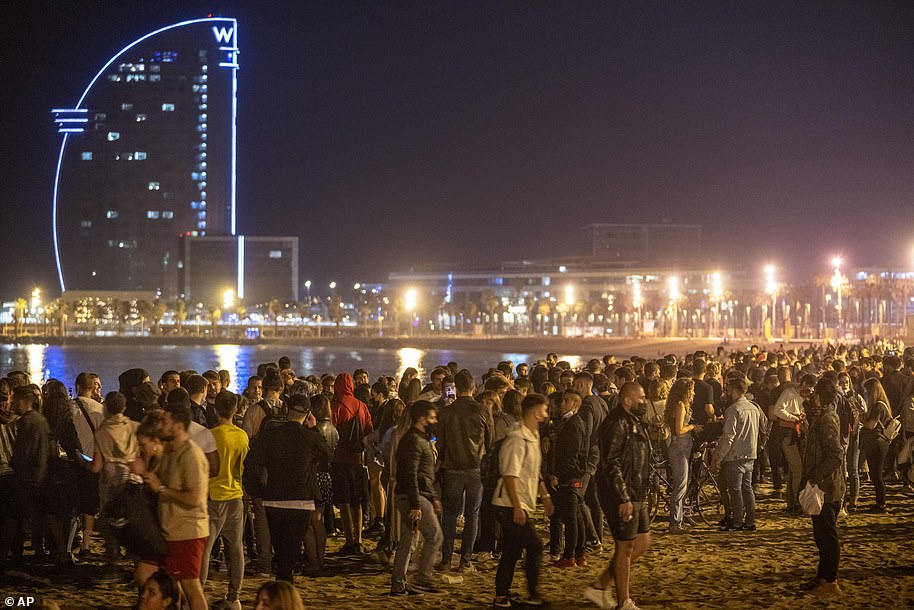 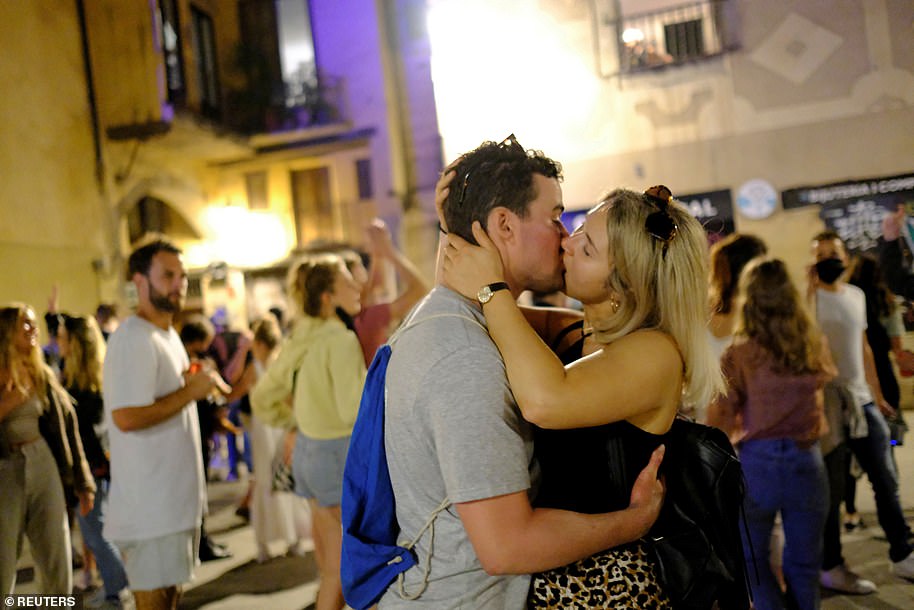 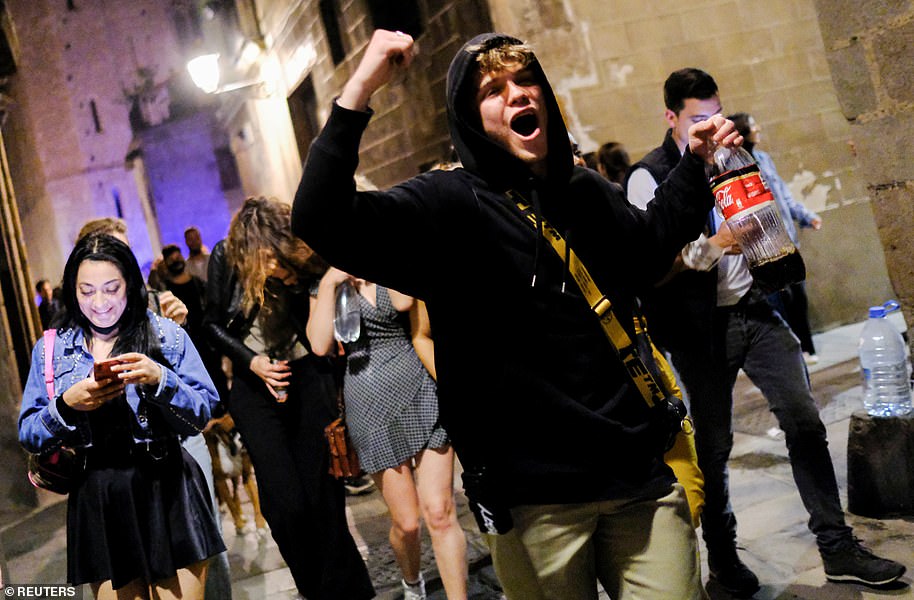 The surreal scenes, dubbed today by local media as a New Year’s Eve night in May, came 48 hours after Spain’s popular Brit holiday destinations were hit with the hammer blow of failing to make the UK’s ‘green list’

The surreal scenes, dubbed today by local media as a New Year’s Eve night in May, came 48 hours after Spain’s popular Brit holiday destinations were hit with the hammer blow of failing to make the UK’s ‘green list’.

The bizarre end to a six-month Spanish government-imposed state of alarm which provided the legal framework for restrictions including the night-time curfew, meant millions of Spaniards had to be indoors by 11pm on Saturday but were free to go out at midnight.

Many youngsters in Spain’s two largest cities Barcelona and Madrid are said to have carried on partying anyway as they counted down the 60 minutes to the recovery of their freedom of movement.

The end of the state of alarm has given rise to a confusing situation in Spain in which Covid restrictions vary wildly between regions.

Restrictions on movement around the country have been lifted, meaning the Costa resorts currently deprived of British tourists can welcome back holidaymakers from across the country.