London: A Welshman who shipped himself home from Australia in a crate has launched an appeal to find two Irish men who helped seal him inside it.

Brian Robson, 75, from Cardiff, was 19-years-old and working in Melbourne for Victorian Railways when he says became homesick.

Robson was in the country on an assisted immigration program in 1964. The Irish Times this week reported he would’ve had to repay around £700 to the government if he returned home early. That’s about £12,000 in today’s money – or $21,000. 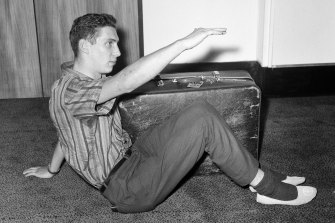 Stiff and limping, home-sick Welshman Brian Robson, then 19, tried to air freight himself to Cardiff from Melbourne but ended up in Los Angeles in 1965.Credit:Getty Images

It said he was earning just £40 a month and so hatched a plan to send himself home in a wooden crate via Qantas air freight in 1965. He is currently seeking the two Irish men who helped him carry out the plan, the Irish Times said.

“I’m 99 per cent sure that they were called Paul and John,” he told the paper. The BBC reported he wanted to buy his friends a drink.

But The Age’s archives reveal Robson’s “crate escape” — reportedly related in a book of the same name to be published next month — might have been unnecessary, at least as far as the money was concerned. He was due to be deported to the UK anyhow.

An article published in The Age on May 18, 1965 revealed Robson had recently completed a five-month jail sentence in Brisbane for false pretences.

An Immigration department spokesman said then that “due to an unsatisfactory record in his short time in Australia, and as there seemed little prospect of his successful settlement, Robson was to be offered repatriation to Wales”.

“Before this decision was conveyed to him, he apparently left Australia,” the spokesman told The Age.

“Had he reported to the department after leaving jail in Brisbane in April, as he should have done, Robson would now be home in Wales.”

The article was published a day after another in which The Age reported the stowaway had landed in Los Angeles in a crate that measured 36 inches by 30 by 38 (less than a metre a side) after his cargo was shipped via PanAm not Qantas.

It said he was too weak to walk after his ordeal and was taken to a prison ward of the Los Angeles County General Hospital, before facing charges of illegal entry into the US. 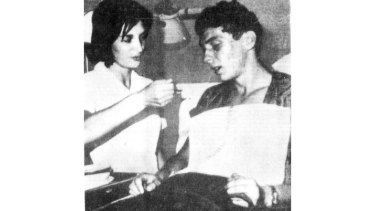 A sergeant at the airport said at the time that Robson would have been dead before the crate had completed the next leg of the journey to London.

Robson says he ended up being repatriated, as a passenger, via PanAm to London.

This week Robson told the Irish Times that his two Irish friends helped him into the crate and nailed it shut.

“Paul really was 100 per cent against it […] but John said, ‘Don’t worry about it, I’ll persuade him.’ And so, they both went ahead and helped.” 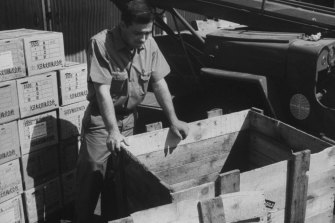 Back in 1965, The Age reported he said three friends, “all Pommies”, had helped him but he didn’t want to reveal their names so they wouldn’t get into trouble.

“If the crate wasn’t delivered in London by Monday morning, they were supposed to get after the airlines and find out what happened,” he said adding that his biggest fear was whether the cargo section of the plane would be pressurised.

“I was dead scared, petrified would be more like it,” he said at the time.

He had a suitcase, a blanket, pillows and several biscuits with him in the box.

After Robson’s landing in the US hit the news, his landlady, Mrs L Beeson of Philipson Street, Albert Park, told The Age she was not surprised.

“I did not realise he was leaving until I went into his room on Saturday to collect some board money. Instead, I found two of my blankets and two pillows missing.”

The Age, with The Telegraph, London