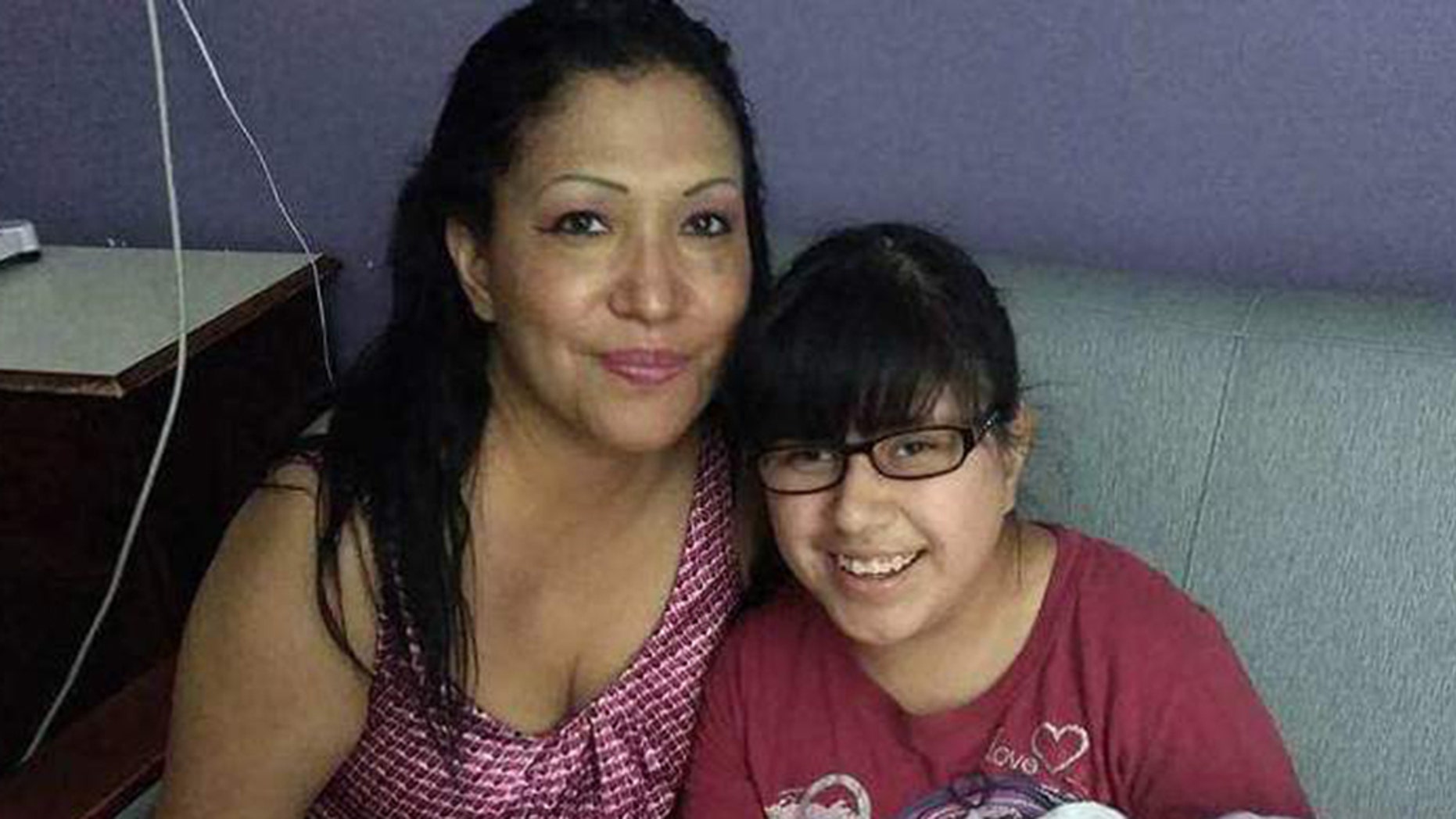 It’s a level of violence so brutal, it is almost unfathomable.

”A couple of years ago, citizens around the world were utterly shocked by the beheadings and immolation murders perpetuated by ISIS. This caught me by surprise,” Joshua Fruth, a former military and intelligence officer and consultant on transnational threat networks, told Fox News. ”Because these tactics have been perpetuated by Sinaloa for some time.”

Fruth was referring to the multibillion-dollar cartel that continues to operate from Mexico and throughout the United States, despite the fact its accused leader, Joaquin ”El Chapo” Guzman, stands trial in a Brooklyn, NY courtroom.

Fruth said the cartel's horrific tactics include the injection of adrenaline and other substances that affect the central nervous system of its victims, "which kept them awake to enhance the responses of pain receptors during slow, prolonged torture." These tactics are used on women and children, Fruth said, including "family members or rivals or snitches, to elicit information and sow fear. These cartels have a history of sexually assaulting the family members of their target, and forcing the target to observe.”

And that's only the tip of the blood-soaked iceberg. Other methods used to murder are too callous for even the most horrid of Hollywood horror movies.

There’s beheading by chainsaw – a rumored favored method of Guzmán, who is said to feature in a 2010 video doing exactly that to murder victim Hugo Hernandez. Even worse, Hernandez's face was reportedly peeled off after he was killed, and stitched on a football.

Then there is the practice of putting people in drums and either boiling them or setting them on fire, or feeding humans to exotic animals like lions and tigers.

One wealthy Tijuana native described to Fox News the day she came home from work one day to find a package containing her husband's body, chopped up in pieces and sent back by cartel associates. 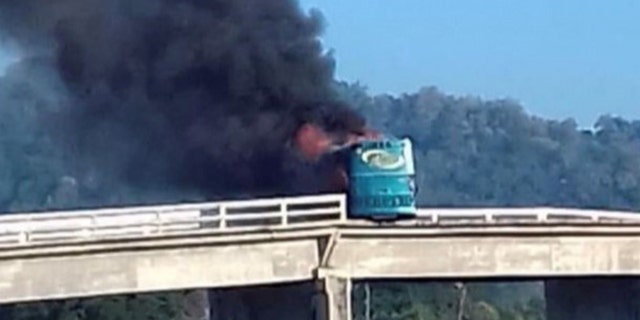 Drug cartels like the Sinaloa have been known to torch buses and blow apart roadways.
(Fox News)

In other cases, it is referred to as “disappearing” people – as bodies will routinely never be found, or are unable to be identified. The reasons for “disappearing” cartel enemies varies.

Perhaps they were connected to a rival gang, or didn’t do their jobs correctly. Maybe they ran up too high a debt, or were deemed a security concern, by speaking to law enforcement. And of course, sometimes it’s merely a case of mistaken identity, or simply being caught in the crossfire.

One senior U.S law enforcement official said it's routine to wake up to reports of a murder accompanied by a swath of intensely graphic images – from headless torsos dumped into acid baths, to gouged-out eyes and other body parts.

”The cartels really seem to like decapitations. They chop off heads, throw body parts in the street or at parties to intimidate and threaten,” said Derek Maltz,  former Special Agent in Charge of the Drug Enforcement Administration Special Operations Division in New York. ”They are killing at unprecedented levels.”

Craig Caine, a retired longtime veteran of the U.S Marshals Service in New York, said the ”tricks of the trade” learned by the Sinaloa were developed by preceding Colombian cartels in the 1980’s and 90’s.

”The Italian mob mostly (was) hands off with a gun to the back of the head. Then Colombian cartels came in and wanted to send a message and instill terror,” Caine said. ”The Mexican cartels have their own ways … And now, they have just become greedier and don’t know where to stop.”

Caine recalled seeing warehouses in Brooklyn loaded with drugs and money, in which the enforced dress code for women was being naked, while mixing bags of crack cocaine on behalf of the cartels. The women would then endure humiliating body searches before leaving, to ensure no product had been pilfered.

In another case, Caine said, a young couple who had crossed the cartels were discovered dead – hog-tied, feet-tied together, naked and impaled on a fence – with ”his lower parts stuffed in her mouth.”

”The violence is ruthless,” Caine conjectured. ”There is no honor code.” 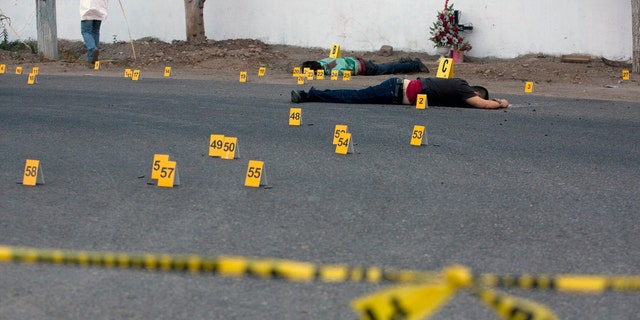 Bodies lie beside a road after a shooting in Mexico’s Sinaloa state this past June.
(AP Photo/Enric Marti, File)

And while the vast majority of the barbarity takes place south of the U.S. border, American soil is far from immune. Authorities refer to this as "overflow” violence.

In June, the body of 49-year-old Alabama grandmother Oralia Mendoza and her 13-year-old granddaughter Mariah Lopez, a middle-school student with special needs, were viciously slain – the alleged result of being caught up in Sinaloa cartel violence.

Mendoza had reportedly tried to shift a quarter kilo of meth from Norcross, Ga. to Huntsville, Ala. with her Sinaloa-associated boyfriend, and an ex-boyfriend. But on the journey, the men are said to have raised the alarm about someone double-dealing. Sensing the danger, Mendoza texted an unidentified friend, asking her to meet them.

But the men with Mendoza are believed to have discovered the texts late that night. They woke up Mendoza and her grandchild, and told them they would be transported to safety. They instead took them to a nearby cemetery, where Mendoza was repeatedly stabbed, prosecutors said, and left to die.

The headless body of Lopez – presumably a witness to her grandmother's murder -  was later discovered by a farmer, still wearing her gingerbread man pajamas. Both men have been charged with two counts of capital murder.

South of the border, meanwhile, officials say the Sinaloa is responsible for much of the cartel-linked violence that has left an estimated 80,000 dead since 2006, when the Mexican government officially launched a war on drug trafficking. Other experts put that number much higher, and say as many as 200,000 may have fallen victim to the drug gangs. Another 26,000 people are said to have gone missing during that time.

”The Sinaloa Cartel is a savage and brutal organization. There is an epidemic of murder in Mexico and the majority of it is committed by organized crime,” said Jeffrey James Higgins, retired Supervisory Special Agent with the Drug Enforcement Administration. ”The Sinaloa Cartel is the oldest and largest cartel in Mexico and as such, it has an outsized influence on the murder rate south of the U.S. border.”

David Gaddis, CEO of international protection firm G-Global Protection Solutions, and a former chief of enforcement operations at the DEA, said the Sinaloa Cartel at one time slaughtered more than a thousand people per month. ”Now it typically varies between 200 and 300 per month."

Violence typically surges in times when cartels are squabbling for further territorial control or when faced with a military offensive.

Given the power vacuum since Guzman’s arrest and extradition, analysts say the mayhem is again on the uptick.

”Judges, prosecutors, and police are killed because they refused to take bribes, or as a way to free defendants under their control, or as messages to threaten other members of the law enforcement community,” Higgins said. ”Military may be killed in direct confrontations with cartel members, or to protect the cartel's produce. Politicians are often killed for standing up to the cartel or to damage the rule of law. Civilians are killed for testifying in court or for informing on the cartel.”

According to experts, specialized hitmen have a crucial and increasingly important role within the Sinaloa structure. ”Assassinations are generally carried out by sicarios – professional hitmen,” said Fruth. ”But I surmise it is not uncommon for junior members to be de-sensitized to the violence by showing their loyalty through an initiation that requires the performance of an execution.”

And it's a threat seemingly not limited by geography.

”The cartels have hit men who will travel anywhere or anytime to take care of their dirty murderous business,” Maltz added. ”The Mexican cartels like Sinaloa should be designated as foreign terrorist organizations and we should apply way more pressure to stop the madness around the world.”

Inside Putin's 'secret' daughter's luxury penthouse up for rent