Each morning the prep children at Reservoir East Primary School begin their school day with an acknowledgement of the land and why it’s important to care for it in the way that Aboriginal people have done for many centuries.

The routine is one way the school embeds Aboriginal and Torres Strait Islander history and culture, one of the curriculum’s three “cross-curriculum priorities”, in its teaching. 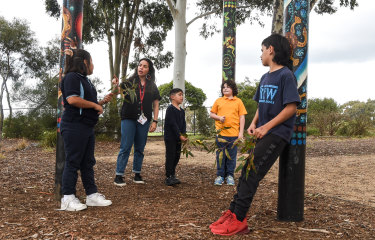 A review of Australia’s curriculum released last week found numerous concerns with how that history and culture is taught, including a lack of “truth-telling” about First Nations’ experiences since the arrival of Europeans, and a failure “to recognise that they experienced colonisation as an invasion and dispossession of land, sea and sky”.

It’s unlikely those reviewers were referring to Reservoir East Primary, where any teaching of a “white-washed history” has long been excised in favour of an approach that confronts tough truths about stolen lands and stolen generations, according to prep teacher Alinta Williams.

“I think we need to give our students a lot more credit than they probably get in terms of their understanding and empathy towards these discussions,” Ms Williams said.

“There are so many resources out there, so much fantastic literature and excellent websites, that there really is no excuse not to.”

Any changes to the curriculum that follow the review will take effect next year, following 10 weeks of public consultation. The final version must also be signed off by all federal and state and territory education ministers.

Federal Education Minister Alan Tudge last week said he was concerned that the draft version might not have got the balance right between honouring Australia’s Indigenous history and its Western heritage.

But Debra Bateman, Dean of Education at Flinders University and an expert on curriculum development, said the proposed changes to Australia’s curriculum reflected an increasingly sophisticated understanding of Aboriginal reconciliation and of Australia’s place in the world.

“History is not a singular narrative,” Professor Bateman said.

“In Australia, for a very long time we have kind of depended on a narrative of sameness, that to be an Australian means that we reflect a whole range of stereotypes.”

Debate about the proposed changes – which also include replacing reference to the nation’s “Christian heritage” with references to its multi-faith, cultural diversity – reflect a long-standing “tension between the traditional and the dominant cultural view and the emergent, changing world view”, she said.

At the Knox School, an independent coeducational school in Wantirna South that uses the Victorian curriculum, Australia’s history is also taught as something that is “contested”, principal Allan Shaw said.

“We try to place in front of the kids that there are differing perspectives on this,” Mr Shaw said.

“That often history is written by the winners, one, and, two, that’s not necessarily the whole truth or the only truth.

“History is often a contested space once you get past the bald facts of who arrived where and when.”

Amazon delivers a LIGHTBULB to decorator instead of a £1,345 drone

Elderly Manhattan woman died after being hit by Revel rider

What happens if Chelsea finish fifth and win Champions League and Arsenal win Europa League? Will West Ham miss out?