Premier Daniel Andrews has condemned “ugly scenes” in Melbourne following violent protests that he described as “appalling” and “unlawful”.

“Whether you want to call it a riot, a fray, ugly scenes, you can scarcely find a word to adequately describe what we saw yesterday,” Mr Andrews said on Wednesday. 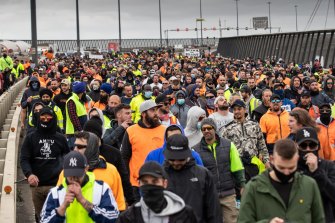 Protesters on the West Gate Bridge on Tuesday.Credit:Jason South

Hundreds of police have blocked Elizabeth Street near the Queen Victoria Market in anticipation of another day of violent clashes, after the city descended into chaos on Tuesday. As of 10.50am, no protesters were seen at the location, though police had made several arrests ahead of the protest starting. A small group of people were walking through the CBD.

Early on Wednesday morning, Mr Andrews promised police would “take action” against protesters who tried to shut down the city again.

Addressing the media at police headquarters, Mr Andrews said he would not be swayed on the vaccine mandate for the construction sector, which was one of the triggers for the violent protests on Monday and Tuesday.

“No worker in construction or any other industry has an entitlement to make the work of our nurses harder. No one has that entitlement. Vaccination is mandatory and only those who are vaccinated, as per the decision that’s been made, will be back on sites.”

Police expect protesters to again flock to the city after rioters, including construction workers and aggressive activists, demonstrated against Victoria’s lockdown, mandatory vaccines and the construction shutdown on Monday and Tuesday.

“None of us are above the law,” Mr Morrison said. “These are measures that we have seen in other states and when it comes to the construction sector and the outbreak. Similar arrangements were put in place in NSW and I think it is very important that we exercise that patience, and we get through what is a very difficult time.” 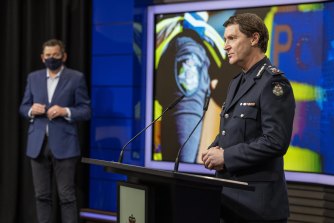 The Prime Minister, who is in the United States, said he had been in text message contact with Mr Andrews, prompted by the Victorian earthquake on Wednesday.

Mr Andrews reiterated his government’s commitment to mandatory COVID-19 vaccines for the construction sector, saying there are more coronavirus cases in construction than in aged care in Victoria.

“There are 350 cases in construction, over 150 different sites during August and September. This is real. Unless we took this action, and unless we see compliance higher, then we’ll continue to see the spread of this virus and that puts everything at risk,” he said.

“I’m gutted to have to shut down this industry. We have all worked so hard to keep it open for the whole duration of this pandemic event, but I can’t just see cases ticking up and up and up, people not wearing their masks, no compliance … you can’t ignore that.

Mr Andrews said he had not spoken with union bosses about the protests, but he insisted that while construction workers were involved, there were “others who were not from the building industry” among the 2000 demonstrators who took to the streets on Tuesday.

“They’re not there to protest, they’re there for a fight, pretend to be protesting,” he said.

It was the first time Mr Andrews had fronted the media following Tuesday’s violent rally, which brought the city to a standstill. Defending his decision not to address the media earlier, Mr Andrews said he had “other matters to deal with”.

“I think if you were to check the record, there will be no politician in this country that has done more media, more regularly, than me,” he said.

More than 500 police officers were mobilised to respond to the violent rally on Tuesday, which started at the Construction, Forestry, Maritime, Mining and Energy Union’s city headquarters, before travelling through the CBD to Parliament House and stopping traffic on the West Gate Bridge.

Victoria Police Chief Commissioner Shane Patton said police would do everything in their power to stop the illegal gatherings, pledging there would be no “cat and mouse games”.

While refusing to detail the police operation that was planned to stop protests on Wednesday, or the number of police involved, Mr Patton said there would be more than the 500 officers who were mobilised on Tuesday, describing the commitment as “significant”.

“I’m not going to talk about what our tactics are, save to say that those tactics will be different. I do not want to be giving any context whatever to anybody who may be considering coming in here to engage in unlawful activity.”

Police said Tuesday’s protest included people from the construction industry and people tied up with the so-called “Freedom Rallies” that have taken to the streets to protest the lockdowns.

“We know from what we have been monitoring that people are being encouraged to put on high-vis gear, to put on workwear, to come in under the cover of a crowd and not necessarily tradespeople,” Mr Patton said.

Police Minister Lisa Neville thanked the police and described the protesters as “thugs” who have sought to cause harm, cause injury.

“To all those police officers who have been out over the last few days putting them, their lives, on the line for the Victorian community and to help us get out of that, I thank you,” she said.

“You have got our support, the government support, my support as Police Minister.”

State deputy Liberal leader David Southwick said on Twitter: “There is a line between freedom of speech and violence that should never be crossed.

“Incidents of journalists, police and businesses being attacked is not OK and must be called out. Our city is on its knees and this is last thing we need. We need calm and leadership.”

Budget 2020: Chancellor vows to cut taxes for millions of hard-working Brits to deliver on election promises