Police in Washington, D.C. recently released body camera footage showing the fatal officer-involved shooting of a man who drew concern from neighbors after allegedly wielding a long gun on his balcony.

In footage released last week by the D.C. Metropolitan Police Department, officers responded to the 1400 block of V Street, Northwest around 6:55 p.m. on Aug. 31 “to investigate a report of an individual holding a long gun.” Neighbors reported seeing the man, since identified as 34-year-old George Watson, outside on his balcony with the weapon, Fox 5 DC reported.

Police said officers were directed to an apartment where they contacted Watson and made several attempted to speak with him and deescalate the situation. Watson went back inside the apartment, and as officers assessed the situation, returned with “what appeared to be a long gun,” the department said. An officer on scene discharged a firearm, striking Watson.

After securing the apartment, officers began life saving efforts until D.C. Fire and Emergency Medical Services arrived and transported Watson to the hospital, where “after all life-saving efforts failed,” he was pronounced dead. 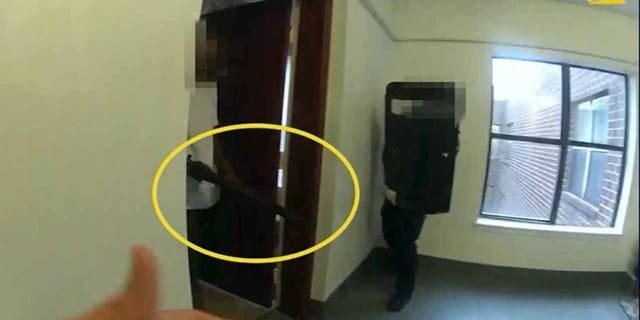 DC police released body camera footage showing a man, identified as George Watson, wielding a long gun before he was shot and killed by an officer.
(DC Metro Police)

Sgt. Jonathan Nelson, a 12-year veteran assigned to the Third District, has been placed on administrative leave, as done routinely with officers involved in shootings, pending further review, the Washington Post reported.

The body camera footage begins with a woman wearing pink at the top of the stairs appearing to direct officers to a certain apartment. Several officers climb the stairs inside an apartment building and one of the officers with a shield knocks on the door, saying, “Hello, it’s the police.”

“Why is it the police?” someone inside says.

The officer responds, “We’re just trying to check on someone. Can you open the door? We just need to talk to you real fast.” 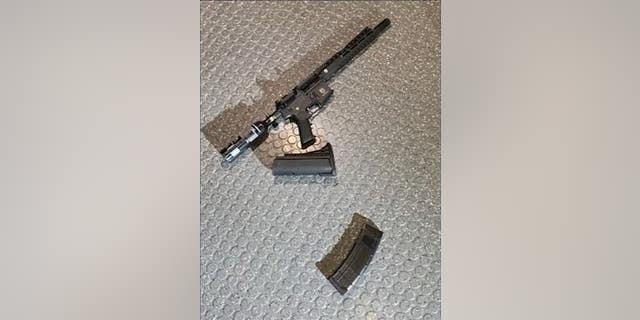 DC police released a photo of the long gun recovered from the scene.
(DC Metro Police)

A man begins to shout profanities at the officers before stepping out of the door, yelling “No, I cannot talk to ya’ll” and “who’s coming up to my door talking about this s***.” He continues to ask about who the woman in the pink was and tells officers they cannot come inside to look around.

One officer tells Watson to calm down, but the man points at another officer again shouting for them to tell him who the woman in pink was before going back inside the apartment and slamming the door.

An officer audibly mentions how the man might be experiencing a mental health crisis and notes that police could not see inside the apartment from their vantage point in the hallway. The man peers his head out again, shouts profanities at the officers and slams his door once more.

The man unlocks his door and steps into the doorframe holding a long gun. The officer whose body camera was recording shoots his firearm several times at the suspect, who is knocked backward onto the ground. The officer is then heard radioing, “Shots fired, shots fired, we have a suspect down” and asks for an ambulance. He yells for the officer ahead of him with his gun drawn to clear the apartment.

Police also released a photo of the long gun recovered from the scene. The incident is under review by the U.S. Attorney’s Office for the District of Columbia. Once their review is completed, the police department’s Internal Affairs Bureau will also investigate.

Third stimulus check – How much will your family get in Covid relief money?

‘Stab in the back’: Europe’s fury with Morrison and Biden over AUKUS submarine deal