The Dean of Southwark has been branded ‘insensitive’ by a bishop for holding a memorial service for the cathedral’s cat.

Doorkins Magnificat had her own social media accounts, became a children’s book star and met the Queen.

But 30 in-person attendees gathered for a socially distanced thanksgiving ceremony after being laid to rest in the cathedral garden. 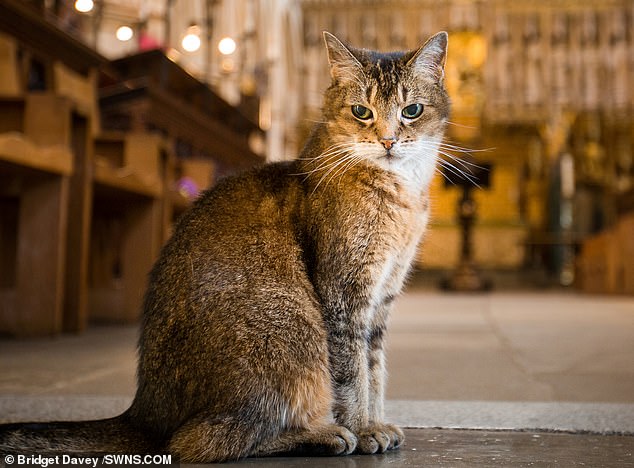 Doorkins Magnificat had her own social media accounts, became a children’s book star and met the Queen

Dean Andrew Nunn told the congregation: ‘In more normal times, we often host memorial services for the great and the good. But I don’t think there’s ever been a service for a cat.’

The service sparked online fury from onlookers who branded it ‘insensitive’ and ‘ludicrous’.

The Bishop of Burnley Phillip North wrote online: ‘Is this a joke? I do hope so. If not it’s grossly insensitive to bereaved families and those ministering to them in the North West under the regional Coronavirus restrictions.’

But he was slapped down by others, including Paolo Thomas, who wrote: ‘What an unpleasant, small-minded, grossly insensitive and unChristian thing to say and think. 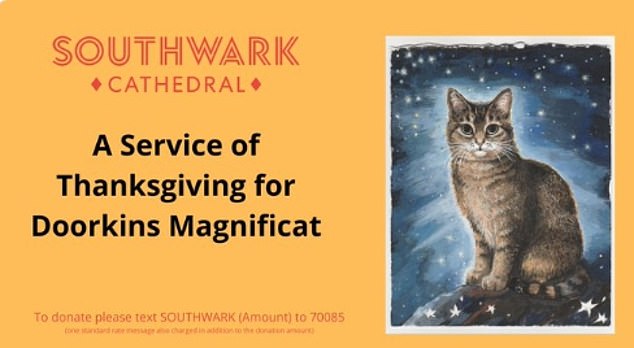 ‘Shame on you. You should apologise. Doorkins’ beautiful soul touched and brought pleasure to many people’s lives, including mine. May she rest peacefully.’

Another, Alison Gibbs, added: ‘Doorkins was a beloved cat who is a symbol of all that’s good about Southwark Cathedral – a place where everyone is welcome.

‘There is no shame in celebrating her life.’

During the service, Rev Nunn, told the congregation that ‘She did more to bring people to this place than I will ever do.’

He said: ‘Some may think that cats don’t deserve ceremonies and eulogies and prayers, that their death should pass without comment or occasion but I can’t agree and I’m not particularly a cat person, or at least I wasn’t before I met her, but this little cat, who arrived at our door, who chose us and stayed changed our lives and enhanced our mission and ministry.’

Head verger Paul Timms, her most attentive guardian who held her in his arms as she died of liver failure on September 30, said her story went to the heart of Christian values.

He added: ‘The challenge is not so much about why, we as a community would dare to have a service for a cat in the middle of a pandemic, but why it should it be that the church seems to be, in so many places, unwelcoming to those who don’t see themselves reflected in our life.

‘Why should it take a stray, feral, and, at times, unfriendly cat to bring the domestic to a place that couldn’t domesticate her.

‘Why did we, who pride ourselves on a tradition of inclusion, need a cat to actually understand what the stranger in the midst really means?’

The stray, who started out relying on the kindness of Borough Market traders for scraps of food, first appeared at the cathedral doors in 2013 and, despite being cautious at first, was welcomed in by Timms.

The Bishop of Burnley Phillip North wrote online: ‘Is this a joke? I do hope so. If not it’s grossly insensitive to bereaved families and those ministering to them in the North West under the regional Coronavirus restrictions’

When she first appeared, it was hoped that she would rid the cathedral of mice, but instead the aloof moggie used it as a ‘sanctuary’ – sauntering about the aisles and napping on the chairs of revered church officials ignorant, or uncaring, of the boundaries she crossed and loved all the more for it.

After the London Bridge terror attack in June 2017 she was locked out as the Cathedral doors closed for security reasons.

After getting back in, she didn’t leave again until her health began to fail and she retired to Timms’ home where she spent her last days.

Delivering a heartfelt eulogy with his voice cracking with emotion, Timms said: ‘She passed away peacefully in my arms that evening to the sound of a familiar voice.

‘It is only fitting, then, that she should be remembered in this way for all the joy, pleasure and comfort she gave to so many people who could identify with her story – a story that mirrored aspects of our human condition, stories of care, hospitality to strangers, comfort friendship, companionship, unconditional love.’

The Bishop of Burnley Philip North has been approached for comment.

Many marched after Stephen Lawrence was murdered — but violence isn’t the way, says his brother Stuart

How Netflix drama Hollywood makes a mockery of Rock Hudson

Lewis Hamilton played tennis with his dad, and some of the game’s greatest stars ribbed him for losing a point, including Serena Williams and Naomi Osaka